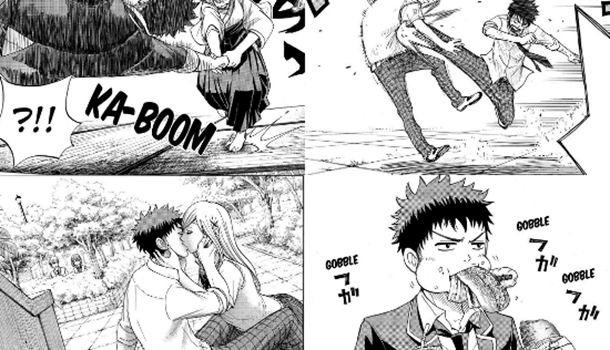 Yamada-kun and the Seven Witches Vols. 1-11

Crunchyroll manga is a service I often forget I own, so when I do remember this often leads to binge-reading of a whole series to catch up. Yamada-kun was the most recent “victim” of this - a gap in translated chapters in the middle of the series was recently filled by Crunchyroll Manga and this, along with recommendations by friends, spurred me to take a look at it.

Ryu Yamada is a pretty unpopular guy at Suzaku High School, being a bit of a lazy sod and an impolite punk. While being a jerk to classmate Urara Shiraishi the pair take a tumble down the stairs and end up swapping bodies - something that Shiraishi doesn’t really care about but Yamada most certainly does. The pair quickly come to realise that they both have the ability to swap bodies, activated with a kiss, and that there are others in Suzaku High with equally strange abilities - called the Seven Witches. Partially out of boredom, partially out of interest and partially out of blackmail the pair of them team up to try and track down the remaining Witches in the school and find out what powers they hold.

The main “Witches” conceit present in the series works surprisingly well as it is very mechanics-driven and introduces those mechanics at a pace that keeps it fresh and interesting. Importantly, it also knows to treat its rules with respect - there are few exceptions made or “hand-wavey” moments present, allowing them to maintain their integrity and keep you invested. I really appreciated this as often series will dump such elements when they become inconvenient, but instead Yamada-kun works with its own plot limitations and comes out stronger for it. It also knows how to use dramatic irony well - you as the reader often know or can work out new rules or mechanics just before characters do, allowing you to savour a short moment of foreknowledge and anticipation before the realisation dawns on the cast.

Speaking of which, the cast in Yamada-kun are great. They provide a lot of the charm in the series and keep you coming back to see how they deal with everything that happens to them, mostly because they are relatable, imperfect teens. They make dumb mistakes but generally have their heart in what they feel is the right place. You get a lot of interesting inter-relationships going on without things feeling bogged down, a not insignificant feat as the number of characters starts to grow. It helps that a lot of the cast are immediately memorable - even if secondary characters “drop out” for many chapters at a time, when they do re-emerge you can instantly recall who they are.

There are some nice character growth elements thrown in as well which help provide a nice counterbalance to the comedy and story progression. Notably the series carefully sidesteps the usual “I was an antagonist but now I’m a good guy, yay!” trope in favour of more realistic change and development. The doling out of character moments is rather mixed however, perhaps even fickle. Some core cast members get very little, likely so they can comfortably remain as comedy-instigators, and others get massive gobs of it.

Inbetween all of this, the series manages to slather itself in a healthy dose of slapstick comedy - silly faces, silly situations, and lots of physical comedy. People’s eyes will be bulging out of their head at least once per chapter, even during the more serious segments. The jokes help to glue the whole series together, making exposition more amusing and digestible and generally giving the whole production some enjoyable levity. There are some good romantic elements but these often get mixed up in the comedy. This ends up diluting the effect and the degree to which you can take it seriously due to mood whiplash. The romance can at times feel tacked on due to love polygons popping up, which are annoying in how prescribed they feel, and some of the cast end up in a strange “holding pattern” of being vaguely interested in a main character only to have nothing happen. As a part of the comedy, and for the hell of it as well, there is a fair amount of tame cheesecake in the series. It’s harmless, sure, and often at least attempts to be equal oppurtunity, but I wish there were not so many damn panty shots.

You may be wondering when I am going to drop the big “but” in this review and here it is. While I enjoyed the vast bulk of Yamada-kun, the series has a bad case of not knowing when to stop. Having read eleven volumes out of the approximately thirteen available (and the series is still on-going) the series is rapidly running out of steam, and has in fact already passed up two golden opportunities to finish the story and tie things up with a neat bow. Without going into spoiler territory the first of these occurs in volume nine and manages to keep things generally coherent, and the second breaking point happens in volume eleven and for me is an utter dealbreaker. The prior impetus to read the series has dropped off, and what is left at this stage feels like leftovers. Sure, there are more things the series could do with the existing setup, but should it? The longer the series carries on at this point the more distant an ending feels, and I worry that it has gone past the point that it can be done in a satisfying manner.

It feels almost spiteful in a strange way to me - these characters have had enough being jerked around and have done what was needed by the plot, don’t they deserve a rest? I still like the main cast and the fact they are still being forced to dance for my amusement is making me feel restless. This perhaps reinforces my earlier point about the cast being relatable, in that I now feel annoyed for them in a bizarre manner.

I really enjoyed reading Yamada-kun for the vast, overwhelming majority of my time with it. The series is the true definition of a page turner - as soon as one chapter ended I was already loading the next one and in one instance this kept me up until 3am until I had to stop before I fell asleep on my tablet. What concerns me is what comes next - there are 20+ unread chapters ahead and the series is still going, but my earlier irrepressible momentum for the series has been spent. Regardless, it has been a damn fun ride to this point and is worth a look.

Yamada-kun and the Seven Witches is available digitally through Crunchyroll Manga.

7
A bewitching tale, spellbinding for a long duration but one that sadly fizzles out.