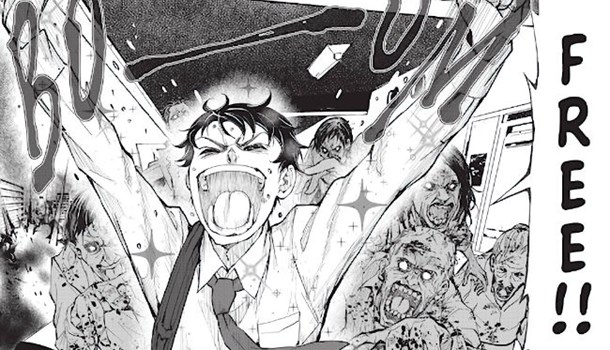 Akira Tendo is a zombie.

Not an actual one, you understand, even if his filthy apartment might make him smell ripe enough that you might mistake it at first glance - and even if his baggy sleep-deprived eyes might give him the vacant stare of a zombie as well.  Akira would clean himself up, but he never has the time – for he is yet another corporate drone, wage-slaved to Japan’s notorious “Black Companies”. Akira is only 24 years old, but barely at the start of his adult life he’s already jaded with all of his enthusiasm crushed out of him. Beaten down by screaming tyrannical supervisors, dominated by endless mandatory unpaid overtime (everyone has paid leave guaranteed in their contract, of course, but God help you if you ever try to actually claim it), Akira wouldn’t miss the world if it all fell into oblivion… then it actually happens. The zombie apocalypse hits Japan! Cities are burning, shambling hordes are devouring their friends and neighbours, the streets are slick with blood, and Akira… doesn’t have to go to work anymore!

The collapse of civilisation may mean destruction on an unparalleled scale, but it also means no bills to pay, and no 9-to-5 schedule to keep. Akira finally has time to do all the things that his career prevented him from doing. The world is dead, but Akira is living his best life.

Zom 100: Bucket List of the Dead is written by Haro Aso, who has recently gained a much higher profile thanks to last year’s highly-rated live-action Netflix adaptation of his survival-game manga, Alice in Borderland (Check out the UK Anime Network’s own review of Alice in Borderland here ). His new manga certainly entails a different sort of survival, but is no less interesting because of it. The blurb on the back cover proclaims that this is “an exciting zombie tale unlike any you’ve seen before!” – that’s a bold claim, particularly when the zombie genre has been shambling on for so long it might seem to have staggered in every direction searching out fresh brains and be completely played out… something I think I can say with some authority when I’ve reviewed multiple different zombie titles for the UK Anime Network over the years.

Earlier in the year one of those titles that I reviewed was the first volume of Kingdom of Z. That was another manga which made a promise of a new take on zombies – zombie-wrangling, rather than zombie-killing, was how I described it – but very much failed to show any implication of actually realising it in its opening volume, rapidly falling back on comfortable tropes. That certainly isn’t the case in Zom 100, and it is leaps and bounds better than Kingdom of Z mainly in that whereas that manga was skittish about committing, Zom 100 from the outset courageously embraces its concept. Whereas Kingdom of Z’s Satou was mentioned in dialogue to be a baseball player, this skill had no impact on the story and he was effectively your common-or-garden otaku dweeb from a thousand other manga; by contrast Zom 100’s Akira was on his university rugby squad and this time the hero’s sporting life is actually relevant – he takes down zombies who get in his way with rugby tackles, uses his rugby ball as a tool and his relationship with his teammates does become a factor in the second half of the volume. The opening chapter of Zom 100: Bucket List of the Dead also does well to establish the misery of Akira’s Japanese salaryman grind – and while this might initially be seen as derivative of I Am A Hero, which also had a prologue of hero Hiro’s unsociable life as a mangaka assistant before the zombie action kicked off, Zom 100 does do its own version in a substantially different way. There’s a brilliantly pithy segment where Akira, a bright-eyed, fresh-faced rookie, thoroughly enjoys his first day in the wonderful world of work. The job is demanding but engaging, the objectives are fulfilling, and the camaraderie from his new colleagues at the bar after close of business is like he’s already found a new family. As Akira stands up to toast the first day of his new professional life, his colleagues stand with him… because they’re shuffling out of the bar to go back to the office and pull an all-nighter.

Zom 100: Bucket List of the Dead also stands out on its fundamentals.  There are precisely three (3) zombie plots: (a) basic survival under siege during the outbreak; (b) a survivor camp tearing itself apart in civil war because Man Is The Real Monster; (c) zombies = consumerism allegory, season with shopping malls to taste.  Astonishingly, though, Zom 100: Bucket List of the Dead successfully manages to lever apart these cast-iron jaws and feel genuinely new – Akira’s deliriously irrational reactions and upside-down prioritisation also deftly flipping the genre conventions on their head. You really don’t know what’s going to happen next.

Another point of contrast where Zom 100: Bucket List of the Dead is superior to Kingdom of Z is the artwork. Thanks to a crinkly, aged, sunken scratchy-lined crepe-paper skin the zombies themselves look a lot gnarlier and more tightly-grasping in their wiriness – the first money-shot of a zombie twisting to face the reader looks grim and wasted. Both manga also do feature plenty of sexuality and fanservice, but whereas Kingdom of Z felt a bit perfunctory with its basic bishoujo babes, Zom 100 manages to elevate its fanservice to complement and enhance a gritty grindhouse atmosphere: Kingdom of Z flinched after a few panty shots but Zom 100 goes all the way with exposed zomtitties and dares you to get excited.

So far the manga has sounded all like fun and games, but there’s a perceptive blackness to the comedy as well. Some of Akira’s neighbours have also survived the outbreak and are holed up in the apartment beneath his own, and Akira gives them friendly halloos each time he shimmies down the drainpipe to go out scrumping for convenience-store beer (what sort of boring square worries about water?). At first, this looks like it’s being set up to be a recurring gag as they stare on baffled by Akira’s beaming sunniness – but then after a couple of trips the joke abruptly sours when Akira comes back to find the windows smashed and his neighbours devoured. Akira’s bucket list which frames his adventures is itself a dry if not downright existential remark on the banality of aspirations and our encumbrance with ennui. In utopian social visions of universal income and unlimited leisure there is usually a charming notion that if we didn't have to go to work we'd all become poets, pianists and pastry chefs but for most people boredom tends to claim them first... maybe there's actually something to the world of work after all. So, despite the manga’s very title being Zom 100, Akira can’t actually even think of 100 things that he wants to do and his bucket list peters out at 33.

However long or short the bucket list is, though, I am genuinely invested in seeing how many of them Akira gets to cross off. Zombies shuffle but Zom 100: The Bucket List of the Dead pranced with energy; zombies are foul with decay but this manga was a brighty zesty spritz of fresh air.

8
Zombies might seem like a single-minded horde, but this ribald horror-comedy cuts through the mass as a real original.