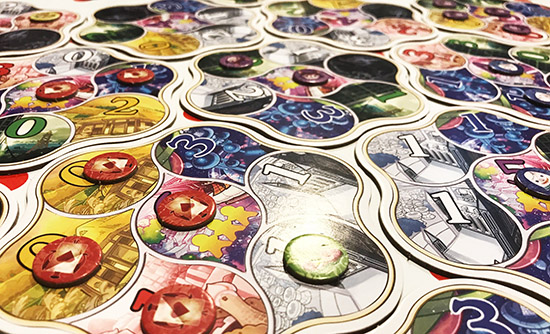 The dream-world, otherwise known as Wonderland, has come under attack from ‘Nothing’ – a dark force born of the ever-changing modern world, set to devour dreams. The Queen of Hearts, ruler of wonderland, called upon Alice (a girl from the ‘real world’ with powerful dreams) to defend the realm and defeat ‘Nothing’. Alice banished ‘Nothing’ to the Mystic Forest and wonderland was re-born, but in her haste to save the kingdom the Queen of Hearts summoned too many Alice’s, none of whom now want to go home. Instead they stay and battle between themselves to stake a claim on the kingdom.

Obviously, before starting you need to have a good read of the rules and if you want to get a feel for the game make sure you don’t skip the comic strip at the front of the booklet. Although the instructions are fairly long, and will take a good half hour to peruse, they are very well put together and I found I could easily get going without having to go to Youtube for help!

There are a huge amount of small card pieces to push out when you first get this one open. Luckily my two-year-old niece was at hand and I acquired her help by telling her that pushing out the pieces was a game! The following steps are then required to set up:

For the purpose of understanding how the game works you need to understand that one ‘Map Tile’ is made up of seven circular sections – one city section in the middle with six other territories surrounding it. The lay-out for a three-player game is nine connected map tiles and two are added for each additional player.

To start, players need to select two starting cities on map tiles round the edge of the board, and place a territory marker in each. One is placed in player order and then another placed in reverse.

The game consists of 14 rounds and in each one you take your turn in two stages:

Stage 1 - Politics: This consists of playing one of your cards onto your kingdom columns. You can play the card either Alice side up, giving you a special power, or Alice side down (as a commoner) which doesn’t give you a power but allows you to take another card. As you only start with five cards and can’t draw one if you play an Alice you have to do this sometimes to stop you running out of cards. Your kingdom columns are five different colours and each Alice has a corresponding colour showing which Kingdom column it must be played into. Each also has a number on it indicating how much ‘Dream Power’ you need to have to play them.

Dream power is gained by playing yellow cards into your kingdom. Red cards gain you attack strength (needed for invading new territories), blue cards are for population (gaining Alice cards), green for food (needed for travel across the board) and white for order (which gains you victory points).

The key of this stage is deciding where to place your card to give you the best benefit based on what you need to plan to do in the next step. For example, you need a certain amount of attack strength to conquer each territory. Therefore, you may need to play a red card to increase your military strength in order to take the territory you want.

Stage 2 - Invasion: Choose to either conquer an empty territory or city on the map or if you are able, attacked another players’. To be able to do this, you have to fulfil the requirements for military power (cards played into the red column of your kingdom must be equal to or greater than the number on the territory) and food (green cards played into the green column of your kingdom must be the right amount to allow you to make it to the territory you are attacking, which varies based on few different factors).

If you play well and select the cards you play carefully, you should be able to place a marker to take a territory every turn, but this isn’t always the case.

After all the rounds are played the scores are tallies and without going into the full complexities there are the three different ways points are earned:

Unsurprisingly the winner is the person with the most Victory Points once this is all added up.

Further layers of complexity are added into the game by many varying Megalomania abilities, special rules surrounding capturing of mystic forests and acquisition of resource tokens that can be used to temporarily boost your abilities. I haven’t gone into detail on these as I just wanted to tell you enough to get a feel for the game.

I thoroughly enjoyed this game! The anime illustrations on the Alice cards are awesome, with a large number of characters ranging from ‘Astronaut Alice’ to ‘Panzer Alice’ - check out a few in the gallary below. The colouring of the illustrations on the box graphic is a little washed out and gives it a unique took, but this doesn’t follow through to the cards which are bold and bright.

As I mentioned previously, the rules are lengthy but well laid out with handy illustrations to make examples clear. The dynamics of the game play are easy to get to grips with but the tactics are complex. I consider this a great combination for a game, as I could get playing easily but found myself continually coming back for more games as I gradually improved my tactical understanding. The other great element of the gameplay is that there isn’t one sure-fire path to victory – you have to strike a balance between where in your kingdom you play your cards, but also need to work with the starting positions you get and the cards you end up with in your hand. For example, you shouldn’t adopt a tactic of building great military strength if you don’t get the red cards required in your hand.

A few nit-picks would be that no clear bags are given for storing the many playing pieces and that it’s a game for three to five players. There is no reason is couldn’t have been made for up to six player and some adaptive two player rules added, although I can see why two players wouldn’t be the ideal.

If you’ve ever played and enjoyed Settlers of Catan, I definitely think you’ll enjoy this one as the board layout (that changes each game) and the balancing of resources is very similar. Obviously, there is no dice element here, but the card drawing adds a similar element of unpredictability. However, I must also stress that the concept of this game is far enough removed from Catan that it still feels completely original and excellent, in its own right. I particularly loved the fact that it isn’t clear exactly who is in the lead throughout. The benefit of this is that most player feel in with a chance of the win throughout which keeps everyone interested.

This is definitly a game that I will keep getting out and introducing new player to!