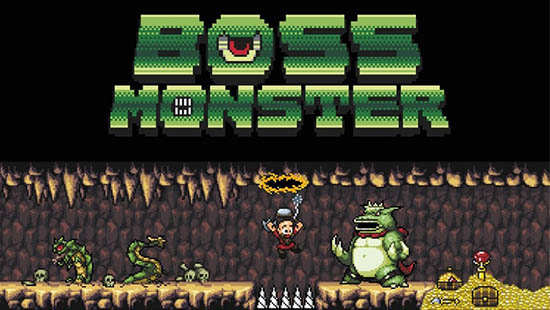 This game is based on classic side-scrolling, dungeon-crawling video games like Super Mario, but this time you are the baddie! You are challenged to build the ultimate dungeon, full of traps and monsters that heros must face in order to reach your ‘Boss Monster’. You must compete with other players to lure heros into your dungeon and then defeat them before they make it through! Heros defeated by the dungeon are worth soul points, but heros that make it through cause wounds to the Boss Monster. The winner is the first player to ten soul points, but if you get five wounds you’re out of the game!

This game is fully card based, so all you need to do is separate, shuffle and lay out the different card types:

At the start of the game, your ‘Boss Monster’ is laid at the right-hand side of your play area. You can then lay one dungeon room to the left of the Boss to start you off before the rounds start. Rounds then proceed as follows:

I really love the cards for this game! The images are pixilated, which really gives you a feeling of the old 1990’s Gameboy platform games. Hidden within the images are some great ‘Easter-Eggs’ referencing various popular culture, which is a great touch (check out a few examples in the gallery below).

This game is simplistic enough that you can easily set it up, learn the rules and get playing in a short period of time, but it is complex enough to hold your interest and get you thinking – in my opinion, the perfect balance. As with a lot of games, the dynamic works better, the more players you have. The box says 2-4 players, but I can’t see any reason why you couldn’t play with more – you might run out of hero cards, but you could just say that the winner is whoever has the most soul points at that time.

This game is ideal for an evening in with friends who just want a drink, a chat and something semi-serious to entertain. It will also go down well with anyone who is a retro game fan for the pure vintage feel of it and will bring back memories of games long forgotten. Also, the other benefit of any fully card-based game is that it’s easy to travel with if you want something to take with you on your hols!

If you love this game, you can also build on it with ‘Boss Monster 2’ which adds in Dark Hero’s, Hybrid hero’s, Epic Spells and ‘cycling rooms’ in order to add variation and up the ante! There are also quite a few other expansions and playmats available if you really get into it!

This game offers a unique game format, hours of retro fun and opportunity for expansions with increased complexity, so definitely worth a look. And at a price point under £25 it’s great value for money too!

9
Bring back memories of long-forgotten video games with this easy to learn card game!
COMMENT AND DISCUSS
blog comments powered by Disqus