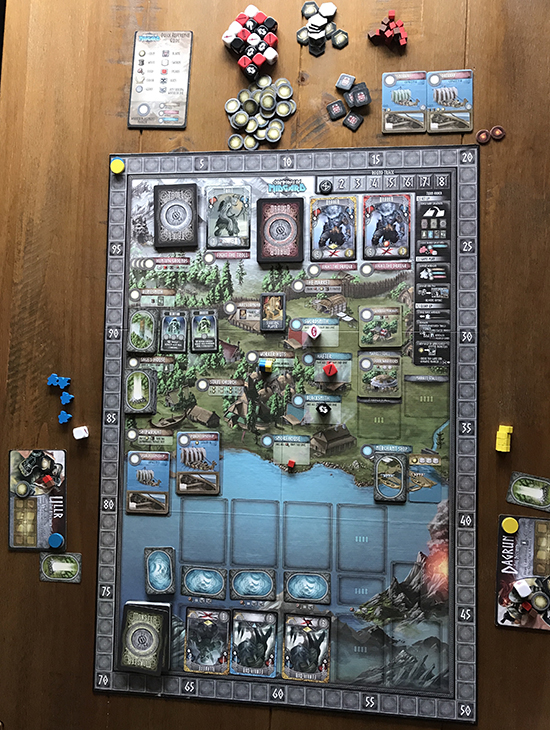 This review is designed to give you a general feel for what this game is about, a rough outline of how it plays, some tips on strategy and my feelings on the game. It does not contain full instructions on how to play.

In this game, that originated as a ‘kickstarter project’, you take on the role of a Viking warrior (each with different special abilities), charged with defending the land of Midgard from a variety of Monsters, Trolls and Draugr. You are competing with your fellow warriors to become the Champion of Midgard by clocking up the most ‘hero points’, gained by defeating monsters and completing various other tasks and challenges throughout the game.

There are a lot of pieces to this game, that makes the set up and learning of the rules fairly complex. The instructions however are really well written and laid out so with a bit of study you will be up and running in no time. Another great point is that new players, playing with experienced players have almost equal chance of victory, as you can grasp the concept within one round of turns if being shown how to play.

The game consists of 8 playing rounds, during which each player places their four action pieces (there is an opportunity to buy a 5th action piece) to gain weapons/supplies/rune cards/destiny cards (objectives) or to fight various baddies. All but one action can only be taken by one player in a round, so it is key to snag the most important things first, and particularly if playing with four players. By the last round you can often get stuck taking actions you wouldn’t otherwise choose, because there are limited options left. This can be a little frustrating, but is all part of the game strategy. There is also an option to use an action to secure yourself first go in the next round, which can be well worth going for, particularly when playing with three or four players.

If you place action pieces that gain you weapons, supplies or some other benefit, then you gain this straight away and can choose to trade it later in the round if opportunity arises. Once all the action pieces are played, it is at that point that any battles with Trolls, Draugr and Monsters are resolved with hero points and other rewards being gained for success in these confrontations.

Once the eight rounds are complete, additional hero points are calculated for each player (starting with the player in last place at that point) for completed objectives, remaining resources and a few other potential achievements. The great thing about this method of scoring is that it isn’t always clear who is in the lead throughout the game. This not only allows you to implement more sneaky strategies, but it also means that, even if you’re at the back of the scoring, you nearly always still feel in running for the win. This makes it a great game to play in comparison to others where you get a clear understanding half way though that you have no chance of winning, which can so often take the joy out of playing.

One of my favourite things about this game is the fact that there is not one clear strategy that is always a winner. This means that you have to constantly be keeping an eye on what your competitors are doing and adapting your strategy when someone else nabs the action you wanted. But here are a few pointers that could give you the edge:

The graphics are pretty cool and feel really authentic to the theme of the game. There could have been a little more variety in the illustrations for the monsters as there are many repeats, but this doesn’t detract from the game play. The pieces are a combination of painted wood or ‘punched-out’ card, but all are pretty durable, and there are plenty in the set, so no big deal if a few end up down the back of the sofa!

There are a few variants in the game that change/rotate each time you play, and this improves the longevity. You are also able to play as different characters, which have varied special abilities and this in turn has an influence on your game play and adds to the appeal of playing it more frequently. I recommend that you don’t always play with the same character, rotate each time to make it interesting. It’s definitely a game that is complex enough to hold your interest over a lot of outings!

There are also two available expansions. Although I am yet to add them to my collection, here is a rough outline:

The Dark Mountains Expansion: Although I am yet to add this to the collection, it apparently gives you the option to play with five players and adds additional rune cards and market tiles to your set. It also adds a new enemy type called Bergrisar, adds in Trolls and Draugr that are more powerful than in the original game and gives you the option to take new journeys on land. Finally, there is the option to take on the archer clans of the north, with the possibility of liberating archers to join your cause.

Valhalla Expansion: In this expansion you are able to gain rewards when your warriors die in battle (a frequent occurrence in the main game). These fallen warriors are even able to compete in battles for you from the afterlife – hence explaining why the expansion is named after the Viking equivalent of heaven. You also have the opportunity to recruit two new types of fierce warriors (Berzerkers and Shieldwarriors) to your cause.

A lot of games as complex as this either have to have three or more players, or playing with two players requires modified game play, which often detracts from the enjoyment of the game. One of my favourite things about this game is that you can get just as much enjoyment out a two player game as you can three or four players, which is a huge bonus.

As I mentioned previously, the fact that you don’t have a complete view of how all your opponents are doing thanks to ‘hidden points’ scored at the end, you never feel out of the running, which helps you enjoy the game all the way through.

The other huge bonus is the fact that there are a variety of strategies that can get you the win, so you can play each game differently and still come out on top!

The only thing I would want to improve is to perhaps add a few additional options for actions that can be taken when playing with four players as it does get extremely limited, especially when 5th actions are purchased. I am yet to discover whether the expansions actually do this. Also, it doesn’t feel like there are quite enough combat dice available in play when you are playing with 4 players.

Luck does play a huge part in this game, as battles are decided on dice rolls. This can be as frustrating, when you see the blank rolls, as it can be exciting when you score all your hits in one roll. As frustrating as this can be, the dice do play the great equaliser, as naff roles can bring down the keen strategist who has been leading for the whole game, just as great roles can raise up the player at the back of the pack.

Overall, I think this is a great game, that I have already had many hours of enjoyment from and which all those I have played it with seem to have really enjoyed. It sells at a really reasonable price (around the £45 mark) for the complexity and longevity that you get. I will have to wait to decide whether the expansions are equally good value!