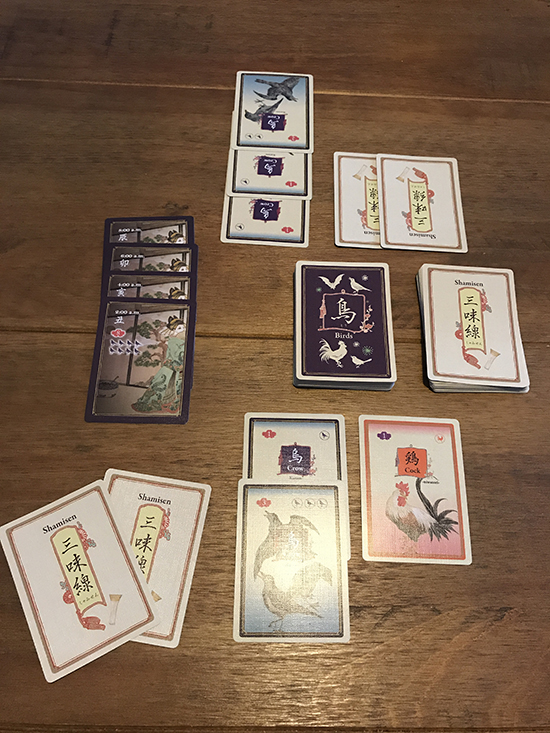 The theme of this game revolves around the lyrics from an ancient Japanese song, sung in the red light district, the words of which translate as ‘I’d kill all the crows in the world to sleep with you in the morning’. Visitors to the brothel know that they must leave as the birds begin to cry in the morning, but they want to stay as long as they can in the arms of their lovers. Therefore, they must get rid of the birds in order to prolong their stay.

This game is really simple to set up as it is completely card based. You have three main sets of cards:

Amusingly the rules dictate that the person who went to sleep latest the previous night gets to go first! At the start of each turn, you have to pick up three more bird cards and two Shamisen cards. Your objective is to use your Shamisen cards to get rid of as many of your birds as possible, potentially messing things up for your opponents in the process. There are certain birds that will throw a spanner in the works – watch out for the owl and the bat!

By the end of your turn you must ensure that you have not exceeded the number of birds, indicated in the time cards, that will cry and cause you to have to head home. If you have exceeded this total you are out of the game! The winner is the last person left in.

There is very little variation to this game and so one game plays much like the next. It is also fairly luck dependent, which means a huge amount isn’t required in the way of tactical understanding. That’s not to say that it isn’t a game that you will get pleasure out of for a long time.

I really enjoyed this game. It was really easy to learn, the rule book explained everything, so no need to scrawl through YouTube for an instructional video – one read of the rule book and we were up and running! If you can avoid revealing that the origins of this game are connected to prostitution (which would be fairly easy as there is nothing at all gratuitous about any of the materials) it would actually make a great game for the family to play, as I think young players could pick this up quickly too.

We learned this game, playing with two players, but found this a bit limiting. With two players you only have one person to pick on and as a lot of the cards allow you to de-rail an opponent, you always just end up disadvantaging each other. We found this meant most of the games were over fairly quickly. Once we played with three and four player, you could choose the player that was out in front to disadvantage and the game lasted longer and was a lot more tactical.

Although this is a pretty simple game, I really enjoyed it. This game isn’t going to give you and hours and hour of amusement, developing strategies and tactics, but it is a great little game to have around for when you need a quick fix! As the set-up is quick and the game length is short, it’s a great game to have to hand when you want to play something simple or time is an issue. Also, as it is purely card based, it’s a brilliant game to take with you if you’re travelling! It is also worth pointing out that there are some great deals on this game with some online retailers right now.