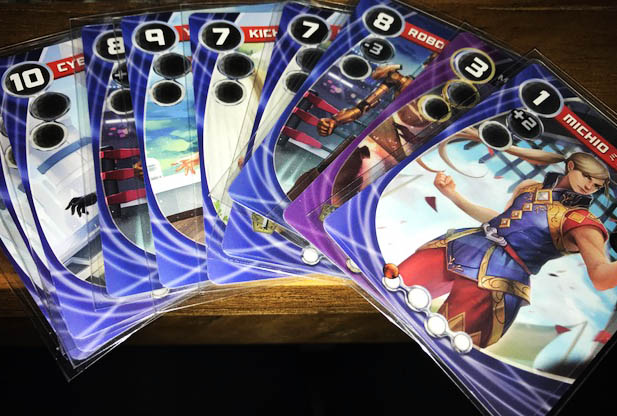 This game was designed by US designer John D. Clair, who originally came up with the idea for card-crafting games. However, the game has proven hugely successful in Japan, so much so that it comes in a dual release format with box title and instructions in both English and Japanese, which is actually rather unusual.

Primarily, this is a trick taking game, where you are attempting to win each round by being the last person to be able to play cards. It combines this with a ‘Card Crafting System’, whereby cards can be adapted to change their value or give them specific abilities. When a card is adapted, the modification stays with it for the remainder of the game.

To enable the card crafting system, each of the 60 playing cards (6 x 10 different characters numbered 1-10) needs to be inserted into a clear plastic wallet. This wallet is what enables you to adapt the cards by inserting up four clear insert cards. Each of these inserts also needs to have clear film removed, making the set-up a rather dull, repetitive process, but thankfully you only need to do this once.

Finally, each player gets a ‘victory point’ token, two ‘power tokens’ and a playing screen, which enables you to hide your hand and card advancements from the other players.

The game consists of rounds that go as follows:

The game goes on until a player gets to 10 victory points and after that they must win one more round to be declared the winner. This is an important rule, as it is relatively easy to get to 10, so this rule allows your competitors the chance to catch up.

If there isn’t a winner, by the above rule, by the time six rounds have been played, a winner can  be declared if another rule is met, or a final 7th round can be played to determine the winner (the details for this are bit more complex so I won’t bore you with them).

Alternatively, the more aggressive approach is to go in with high value and high quantities of cards in order to try on stop you opponents from being able to match what you have. If you have a great hand, this might be a good play, however each player does have an ‘Ascended Form’ card which is an all powerful card, which gives you the win (at a cost of 2 power tokens) provided that another player doesn’t play the same card after you. If you have played a huge number of your cards and used a lot of card advancements and it is followed by a player using the ascended form card it is a huge waste.

The game is balanced out by the rewards you get for your place in each round. Winning a round gets you victory points but less card advancements, and coming last in the round loses you a victory point, but you gain more card advancements, giving you an advantage in future rounds. Therefore it may prove useful to come last on occasion.

Balancing all of these factors and making the most of all your resources is the key to the tactical side of the game. There is obviously a luck element, as what you get in your hand and what card enhancements you draw is crucial too!

The set-up for the game is a bit lengthy and although the rules seem simple at a glance, they are quite complex so it took a couple of read-throughs of  the instructions along with a couple of YouTube videos to fully grasp it. You do get the feeling that a few of the rules have been added in, rather than being part of the original concept, because maybe the initial game wasn’t balanced enough. And I can’t recommend it as a two player game – although it is built to allow this, it is definitely a game that is better with greater numbers.

The graphics on the cards are a great collection of what I would describe as ‘a western take on anime’, with characters ranging from robots to warrior women and enhancement cards adding weapons, cute companions and even (randomly) balloons! The artwork is definitely a great asset to the game.

After the issues with the initial set-up, subsequent games are easy to roll out. The game-play is complicated enough to really get you thinking and weighing up different tactics, but light enough and quick enough to prove really enjoyable for a fairly short game. It also got better with multiple plays as I got used to the different tactical elements. If you like your collectible card games like Vanguard G, but are looking for something for a higher number of players, this is definitely one to check out.

I really love this idea of card crafting. It’s really original and interesting and offers a lot in terms of variation in games, which increases its longevity. However, the reality of this particular game, although good, didn’t quite live up to the uniqueness of the idea. However, it makes me excited to see what else comes from this concept.

And as a final warning – if you do give this one a go, don’t leave it anywhere hot as the plastic cards will warp in the heat!