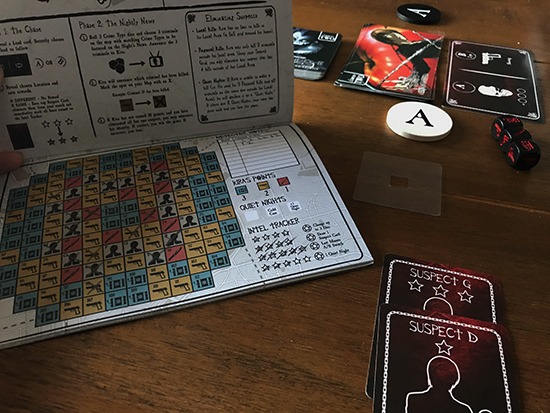 In case you haven’t seen the anime or manga that this game is based on, you should know that Kira is the alias of a young school pupil called Light Yagami who finds a mysterious book called the Death Note – a notebook previously owned by a Shinigami (Death God) named Ryuk. The book has the power to kill by simply writing in the name of the intended victim - Kira chooses to use the book to kill criminals, but becomes hotly pursued by a detective who calls himself ‘L’ (as he has a theory that revealing his name could lead to his downfall).

For the purpose of this game, one player takes on the role of Kira, whilst the other is ‘L’. It is L’s job to identify Kira from the pool of suspects and Kira must avoid detection whilst eliminating criminal victims to earn points (enabling the win condition).

L and Kira each have a separate notebook that contains playing sheets. Each sheet shows a grid made up of squares that represent either suspects or crime scenes. Each player gets a clear square template which is used to mark out the area round Kira’s home, in a 5x5 grid.

You need to shuffle a deck of suspect cards (each with a separate letter) and Kira chooses one in secret.

You also need to shuffle the set of Lead cards and set these to one side along with three dice, which show a weapon that denotes the ,kind of criminal Kira can kill. Additionally, each player is allocated an A/B token (like a big coin with A on one side and B on the other).

Note: The game has two ‘chapters’ and depending on which you are playing, you have a different set of suspect cards and lead cards.

It is recommended that you start by playing the Chapter One format first, as this is simplest, and then when you are used to this move on to chapter two.

The game rotates through alternating day and night phases until either L correctly identifies which suspect is Kira, or Kira reaches 15 kill points.

Throughout the above process, L is using the information gained about where Kira chooses to kill to eliminate suspects on his grid.

Overall the chapter two dynamic is very similar, just with an additional layer of complexity added on top. For this variant the win condition for Kira is now 20 kill points.

During this phase, the lead cards also contain a number of apples next to each location. If Kira gets the kill, he also earns this number of apples and they can be used to buy one of four rewards (each can only be used once).

If, however, L puts Kira off and gains a suspect card, this card contains a certain number of stars. These stars can be saved up in the same way as the apples, to earn L rewards.

For this phase there are now more crime scenes to choose from and only one quiet night is allowed (a second will end the game). However, an extra quiet night can be earned through the ‘star’ rewards.

The best comparison I can make is to say that this game a bit like Cluedo and Battleship rolled into one. It’s really easy to set up and it doesn’t take long to get your head around the dynamics. However, particularly when you get to the chapter two games, it becomes complex and interesting enough to make me go back to it for repeat plays, especially when I want a game with a short timeframe.

One of my favourite things about the game is that it isn’t just using the ‘Death Note’ brand on the box to get sales, as so often happens with these branded games. In this case, the whole style of the game has been created round the narrative of the original story, whereby L hones in on Kira by manipulating crimes publicised on the nightly news and watching who gets taken out. The artwork is also true to the original source but there isn’t a huge amount of this used throughout.

I have a couple of minor issues with this game. Firstly, you only get 11 game maps for each chapter (so enough for 22 game total), which seems a bit limiting but it isn’t unusual for games to have limited resources like this. There is the potential to re-use these the maps though, provided that you use a light pencil, which leads me to my second issue. I think the pack should have included a couple of pencils!

I really enjoyed this game and definitely think this will be one I go back to again and again. It’s somewhat simplistic concept, short game length and the fact that it’s just for two players will mean that it won’t appeal to everyone but I definitely recommend it for anyone who likes strategy/puzzle style games.

8
Take on the role of Kira or L and attempt to outwit your opponent – a great game for puzzlers and strategists.
COMMENT AND DISCUSS
blog comments powered by Disqus