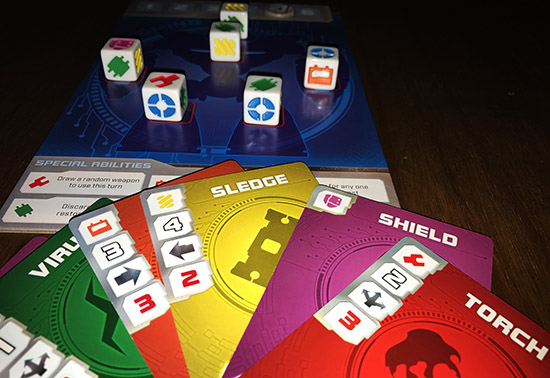 Game Length: 20-45 mins depending on number of players.

For the purpose of this game, you take a trip to the future, where robots have been designed to battle for out entertainment – imagine Robot Wars but with the Pacific Rim characters! Your job is to build the best possible robots in order to defeat the opposing players.

This is a very simple game to set up:

There are two phases to each round of the game:

It is now time to do battle with your opponents!

Combat rounds continue until either players runs out of cards or their energy level reaches zero and they are knocked out of the round. If only one robot survives the round, that player is awarded a victory token. If more than one player are left in, then these remaining players go through the scavenge and combat phases again until one is victorious.

All playerds are then back in the game for the next round and play continues until one player has gained three Victory Points and is declared the winner.

My first thoughts on this game were formed before I even opened the box due to it’s title – adding the word ‘MegaFun’ into the title is surely a desperate attempt to promote it and gives it a lot to live up to – I think DiceBots Battle would have served it better!

Although the game is made for two to four players, I found the three and four player game much better. The two player game is over a lot more quickly and has less variation because your attacks are always centred on the other person.

The pieces are good quality and the instructions well laid out and easy to follow. The instructions contain an additional set of rules to advance the game, which can be added in once you have the hang of the battle. This makes for a slightly more complex and interesting game.

Overall I was not hugely impressed with this game. I found it a bit too simple and luck dependent to hold my interest and draw me back in for more games. However I mainly put my dislike down to the fact that this isn’t a game made for 35-year-old women! The game box says that it’s for age 14years+ but before I noticed that, I was thinking how much my 10-year-old nephew would absolutely love it. He can play much more complicated games so I would say this game is perfect for 10years+, with a little support from an adult learning the rules. I can’t recommend this for adults, but would definitly recommend it for kids!

5
This would be a hit with the kids!
COMMENT AND DISCUSS
blog comments powered by Disqus