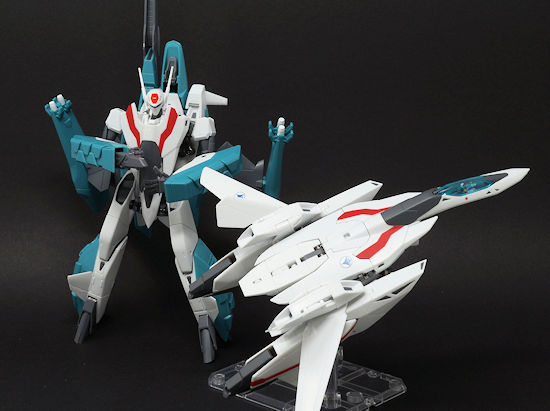 For those that follow all things Macross, you might well be aware that Macross II is the unwanted and much-maligned sequel to Macross that was released in 1992. The entire series was canned from the canon by Studio Nue when they started work on the Macross Plus OVA, and the follow-up series (and arguably far worse!) Macross 7.

The reason the series still has fans in the UK is that it was released by Kiseki (remember them?) not long after the Japanese release, and for UK fans it was pretty much the first time the series has been made available with ties to the original title (I'm not sure we even received Robotech over here).

One of the main draws to the series was the very sharp Valkyrie designs by Kazumi Fujita (original VF-XS design) and Koichi Ohata (refinement to VF-2SS final design).

Until last year, this design had not been given a single toy. Sure, there was a model kit which was passable, but nothing complete and ready to go out of the box. A Chogokin style release then arrived from Evolution Toy, but this was largely regarded as poor in tooling, styling, construction and materials. It seemed that the design was doomed to suck in toy form forevermore.

Then a funny thing happened. Rumours began to surface late in 2017 that a Bandai's Hi Metal R line was going to branch out from the original series. Moreover, it was going to tackle the VF-2SS. Personally, I was amazed at the excitement in the fan community - I had thought everyone hated this design, but once the actual test-shot emerged, it became apparent that not only were fans thrilled by the idea of the release but if the prototype was accurate, Bandai was going to knock it out of the park.

And here we are. A day many of us never thought we'd see - a mainline VF-2SS release complete with Super Armored Pack (SAP), a ton of display pieces and 3 modes that were not only passable but actually sexy. A design that was thought only to be practically possible thanks to "anime magic", but Bandai had made it work.

The base figure has more metal than any other Hi Metal release to-date, and out of the box, even stripped of the extras, this is an arresting figure. The proportions are bang on, pulling off the same trick as the Hi Metal VF1 and making designs that were once stumpy and making them elegant.

Transformation is mostly a pleasure. There are a few tricky bits - getting the arms to align in fighter mode can be a pain, and in robot mode, the chest doesn't lock as tightly as it should, but for the most part, everything locks down as it should.

Gerwalk mode is decent - as a "thing" it is very Macross, and you'll either love or hate this "mid-transformation" pit stop of a mode. I don't mind it at all, but given the two far more appealing options, I'd be surprised if the figure stays in this mode for long.

Fighter mode is as beautiful as they could make this design. It's not the prettiest of the Macross Valks by a long way, but at the right angles, and in the right light, this is bordering on gorgeous. Bravo Bandai.

Once the SAP is added to any of the modes, the figure bulks up significantly. It also allows multiple display options - this being Hi Metal R, it's very much a parts-former, but the options in the box allow for some amazing displays.

The basic armour has a pleasing aquamarine/green colour, with the arms containing working missile hatches. The rocket pods can be open or closed by swapping out the closed hatches for open ones, and I love the understated aggression the open pods bring out in the figure, the white rocket-tips providing a nice bit of colour detail. These are available to deploy on the wing tips and the top mounted turret on the backpack.

As a bit of a visual cheat, the right arm armour has an open hatch piece with the back of the gun poking out. There's not the room in this part to store the actual gun, but this display option casts a wonderful illusion.

Further parts in the box include multiple hand types, split-toes for the Gerwalk feet, a gun, landing gear and a clear canopy for the cockpit.

Overall, this is a remarkably thorough release from Bandai, a cup of water to those of us who have been adrift in the desert for nearly 30 years patiently waiting for a much-underappreciated design to be given form in the real world.

There's a reason I wrote an article on this remarkable line, and if ever a release justified Bandai's investment, I'd argue that this is it.

9
A few minor issues don't stop this wonderful figure from dropping jaws. Brilliant, and about time too.
COMMENT AND DISCUSS
blog comments powered by Disqus