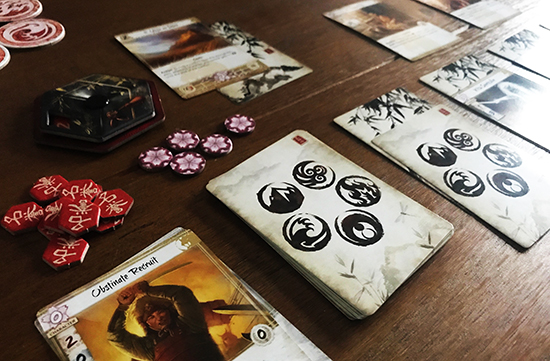 Legend of the Five Rings

This is a re-make of a collectable card game of the same name, but it is not compatible with the original game as some of the mechanics have been changed.

The setting for this game is a land of mystics, samurai, dragons and divine beings known as Rokugan. In this realm there are many clans that serve the Emperor and play their part in defending it from evil forces. However, at the same time, these clans are also involved in deception and power plays and are constantly warring amongst themselves – Japan's answer to Game of Thrones.

You must select which clan to lead and take on your opponent in confrontations of both military combat and political espionage in order to first destroy their provinces and then their stronghold. Throughout these attacks you can choose to act more or less honourably to give yourself the advantage, meaning that there are three ways the game can be won – you can destroy your opponents stronghold (the most common victory), you can gain 25 honour or you can win because your opponent has completely run out of honour.

Start by giving yourself plenty of time to read the instructions and set up your first game as the rules are extremely complex! I would also recommend then watching an instructional video to help you completely grasp the process. The one I found most helpful but also concise can be found here, but there are much longer, more detailed videos out there if you want to get down to the nitty gritty.

There are seven clans in the game that you can choose to play with, but the instructions recommend that you start with the Crane and Lion clans. Once you have selected your clan, take the corresponding stronghold and province cards and get together particular combat and dynasty cards that go with it. You lay these all out as indicated in the rules, along with honour and fate tokens, an honour dial, five ring cards and honour/dishonour cards.

The game is played in rounds during which you will gain resources, enable them for the coming battles, attack your opponents and then re-group for the next round. Here’s how the rounds work in a bit more detail, but this does not serve as full instructions on how to play, by any means;

Dynasty – You take your allowance of fate tokens, as shown on your stronghold. You also reveal the dynasty cards on your provinces and pay fate tokens to these cards into the combat area. Extra fate tokens can be added to played cards in order to keep them in the game for further rounds.

Draw – Players use the honour dial to select the number of conflict cards they want to take and both reveal at the same time. The player selecting the lower number is the most honourable and takes honour tokens from their opponent equal to the difference between the two players selections. Players then take the number of conflict cards they selected from the draw pile.

Conflict – Players take turns to make up-to two attacks on their opponents’ provinces. Upon starting a conflict one of the element rings is selected, which will go to the victor and allow a special ability if they win. During the conflicts, conflict cards can be played in order to influence/support the attack or by the opposing player to aid their defence. Great victories, whereby you win by a large amount will cause your opponents’ provinces to break. Once three are broken, you can go for the win by taking on their stronghold.

Fate – Characters in the play are have one fate token removed from them. Once they have no fate left, they are removed to the discard pile.

Re-group – Bowed cards are readied, unwanted face-up dynasty cards are removed and replaced with face down ones. Unclaimed rings are also returned to the ring pool and the first player token changes hands.

This game has a lot of very similar elements to a collectable card game in terms of the combat style and strategy involved. It is designed to have a lot options to change your decks and swap cards in and out in line with whichever strategy you want to use. The second half of the rule book offers instructions on deck building and advanced strategy for those players who want to delve that deep. There are also several expansion sets that can be purchased to supplement the base game and allow for further variation.

Although it is very similar to collectable card games, the base game and expansion packs each contain the same cards so there is not actually a collectable element to it other than tracking down all available expansions.

This game will not appeal to everyone because of the complexity and its restriction to two players. However, I think it will very much appeal to any CCG fans who love things like Vanguard G and Dragoborne. The images on the cards are beautiful, but very much in a traditional Japanese rather style than anime, and the box and pieces are of a decent quality.

I really enjoyed this game once I got into it, but learning it and getting used to all the different elements took a good long while – two and a half hours to read the rules, set up and play one game. However, once you’ve got a handle on it, the world is your oyster. You can get so much variation from interchanging cards and decks as well as the expansions, that its one game that you will keep coming back to, making it great value for money. I’m giving it an 8 out of 10, as I think this is a great game for the right audience, just make sure it’s right for you before you buy!