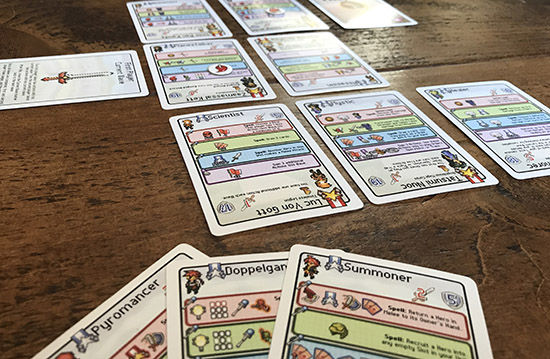 The best way to look at pixel tactics is as a more western take on two-player card-battling games like Cardfight Vanguard or Dragoborne. Visually, its theme is based on pixelated characters that look like they stepped out of a 1980s hand-held video game. You have to select from the cards available a leader, followed by supporting characters to make up your attack force and battle your opponent until your is the last leader standing. Many of the characters used in Pixel Tactics are from another Level 99 game called BattleCON: War of Indies, but the game-play is completely different.

Before starting the game, each player must select a leader for their force, from the five cards they hold in their hand. Both decks have identical characters so there is a chance that you will pick the same leader as your opponent. If this is the case, you both set these cards aside, top up to five cards and pick again. The selected Leader is placed into the centre of your play area (you can get mats to help with card positioning, but these do not come in the basic box).

Finally, a first player is selected, but this alternates throughout the game.

You take turns playing cards into the eight slots in your playing area that surround your leader to make three rows:

Each card has attack and defence scores, but has different special abilities dependent on which row you place it in. This means that selecting which cards you play into which rows is the key tactical dynamic of the game! In addition, each card has an ‘Order’ ability, which you can activate by discarding the card from your hand rather than playing it into your play area.

During each wave you are allowed two action from the following:

At the end of each wave casualties are assessed. Then after each set of three waves, the ‘First Player’ is swapped and the next round begins. Play continues until one of the leaders is defeated and a winner declared. The winning leader cards are set to one side as a trophy for the winner and players can re-shuffle the remaining cards for another round. Players usually continue to ‘best of three’ or ‘best of five’, but this is up to you.

There are other complexities to the game, particularly when it comes to the attack and defence dynamics, but this is too much to go into for a review!

This game has proven so popular that there are now five different base sets that you can purchase. As well as this, there is a Deluxe edition and various expansions. As all base sets play with the same rules they can be combined together to give you greater variation in characters for each game, thus making it more interesting for repeat play. The expansions can also be added in to make things even more exciting!

The key is remembering that, unlike other card-fight games, both players have to start with identical decks.

Card-fight games aren’t my go-to favourite, but they do tend to be some of the best games for two players. Although the game dynamic may seem daunting and complex at first, it is in essence a pretty simple and not too lengthy game once you get up and running. The rules are well laid out, with good use of graphics to help you understand what is being referenced.

Although the game dynamics are fairly easy to get your head round there is a huge amount of variety in the character abilities. This means that it takes quite a lot of playing time to fully understand the best way to make use of different characters abilities and the variour spell and order funtions. This means that the game can appeal on two levels - the casual games will be able to get along with it well enough, but also it offers enough tactical complexity that more hard-core card fighters can really get into it!

The artwork on the box and throughout the instructions is great. However, the tiny pixilated characters on the cards are disappointingly small and the pixilated style along with the size makes them rather featureless. I would have appreciated it more if these characters had been a bit larger and if there were a bit of back-story on each character on the card to add a bit of context.

I love the fact that you can add variation to your decks and get hold of a variety of interesting add-ons, giving it great longevity. I am sure that this game will appeal to card-fight fans, but there is no element of rare card collecting, that some people enjoy. There are however rarer deluxe sets if you like your collectibles! This might also be a good place for younger players to start with card-fighting.