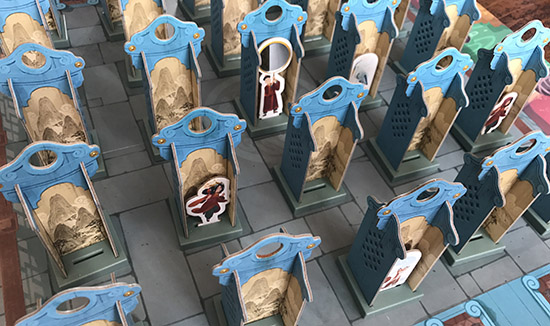 You and your fellow Princess are both attempting to escape from the royal palace so you can run away with your forbidden love, who is one of the palace guards. You must covertly move your Princess across the board to meet her lover, without being discovered by your rival, whilst also trying to disrupt their plans.

The initial set-up takes a little while, as you need to build 25 small cubicles that make up your palace passageways. You also need to get together your coloured characters (each player has a princess, a maid and a mirror holder) and insert them each into a different cubicle. The 25 cubicles are laid out on the 5x5 palace grid and the three cubicles containing your characters have to sit on the row closest to you as you start. On the opposite side of the grid, in front of your opponent, sits the palace guard who your princess must work her way towards.

To achieve your goal, you take turns to switch any cubicle of your choice with any other amongst the (up to) eight that surround it. Following each move you also have the option to guess where your opponent’s Princess is. Guess correctly and you send them back to the start, guess incorrectly and they get an extra turn.

It would be pretty obvious which cubicle contains your princess if you always move the same one and so bluffing your opponent is key:

The winner is the first player to get their Princess across the board and into the arms of her beloved.

Once you have the knack of the basic version you can apply the advanced rules. In this version there are three suitors, and the correct one is determined by code. Each suitor is represented by two animals (from a choice of three) which are now placed secretly onto the board by each player. Before your Princess can escape the palace, you must use your mirror men (as you now have two) to find the animals and determine which suitor is the true love of your fleeing Princess that she must make her way towards.

Obviously, you can start working on getting your princess across the board, whilst you try to figure out the puzzle with the animals. However, starting this too early can waste turns if it leads to your princess being discovered and sent back to the start.

I found that this version took about double the amount of time to play. Not only do you need time to find the animals, but also having two mirror holders in play, doubles the chances that your princess is going to be discovered.

This is a game of strategy and mis-direction – I see it as a chess-style game with an oriental theme. You need to make moves to lots of pieces on the board in order to keep your princess’ location secret whilst moving her across. A good memory is also handy, as remembering the locations of your opponent’s characters is also key. I found that I often lost when I was merely focussed on my strategy and took my eye off what my opponent was up to.

Although the initial set-up is a little lengthy, the box is specially designed to hold the cubicle pieces once formed, so after your first game set up is really quick and easy. The game board and pieces are nicely put together, although as they are made of cardboard and are constantly being handled, I am slightly apprehensive about how well the game will wear over time. The only downside is that the £35 price tag is a little hefty for what you are getting here, so try an pick it up when there's an offer on!

I happened to take this game to an event over the summer and ended up playing it against a 7-year-old daughter of a friend. She absolutely loved it and insisted on playing it over and over, throughout the day. This is an obvious indicator that it’s a great game for the whole family (sadly just two at a time unless you form teams), although she did not get on with the more complex advanced version. I, however found the advanced version much more rewarding as the complexity was more suited to adult players. Over-all this ones’ definitely a win as a family game and for couples who like to strategically battle each other - but don't expect to be able to chat whilst you play as concentration is crucial!

7
A chess-style game with an oriental theme - sound strategy, good memory and a bit or misdirection are the key to this one!
COMMENT AND DISCUSS
blog comments powered by Disqus