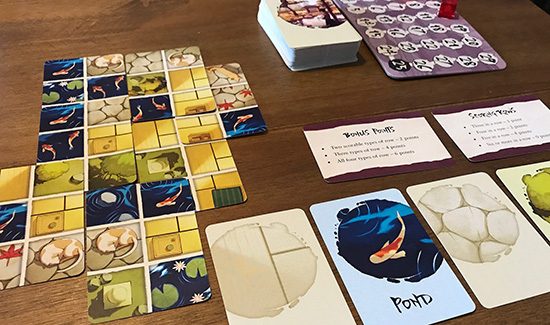 As the instructions state ‘In the time of the Samurai, Japan was ruled by feudal lords, and the lords were ruled by the Shogun. The lords were fiercely competitive, so the Shogun insisted that every lord had to spend half of his time in the capital city of Edo, so that he could keep an eye on them. Most lords built houses for themselves near Edo Castle. Each house had a garden, and what is a garden but a chance to prove your own superiority? Now you must build the most impressive garden to bring honour to your lord, and yourself. You must become a… Samurai Gardener.’

The set-up for this game is really straightforward:

Players also need to ensure that they have enough space on the table in front of them to lay out the garden cards as they receive them, in order to build their garden.

Before talking about the play process, you need to understand the make-up of the cards and how they are used to build your garden. Each card is made up of a 2x3 grid of six squares. Each of the squares contains an image depicting one of the four garden features. There are often two squares of the same feature next to each other on the card, but never three of the same images in a row. When the cards are played to form your garden they need to be placed vertically so can be rotated 180 degrees to be used either way round, but can’t be played on their side.

You place your garden cards in front of you to build your garden. When you play your second card it can either be placed next to your first card, lining up with either one, two or three rows of the first card. Alternatively, it can be placed overlapping with the first card. Your aim is to build your garden to form rows (either vertically or horizontally) of the same features. Once a feature row is scored, you are no longer allowed to place cards that over-lap with any part of that scored row.

The first important rule to note regarding the scoring is the role of the four feature cards you have in front of you. These are there to prevent you from scoring the same row over and over by just adding to the same row each turn. Basically, you have to score all four features once, before you can then score them again. To monitor this, each time you score a row of a specific feature you turn that feature card face down. You are then unable to score that feature until the card has been turned face-up again, which happens as soon as all cards have been scored and turned over.

At the end of a round you score the following points for relevant rows:

You can also score the following bonus points:

This is a really straightforward game to set-up and learn. Although the game-play itself is somewhat simplistic the element forcing you to score all four elements adds a nice level of complexity. The scoring system also makes things more interesting, as enabling additional scoring for clever combinations forces you to think thoroughly about which card you want to try and take and how you are going to use it. This also means that it is suitable for players of all ages and abilities - as long as you are playing against someone of a similar ability, you’ll enjoy a good challenge.

I was not keen on the shouting and card grabbing dynamic – this worked least well for the two-player game. I would suggest that the game would work just as well if the cards were dealt, then players take turns selecting the card they want. This could be done working from the player to the dealers left and working round or it could start with the player in last place and work up.

The game components are good quality, but the illustrations are pretty dull. The instructions are well laid out, with a good use of images for examples, allowing you to be playing within 15 minutes of opening the box – a rarity with boardgames! It’s also nice a compact, so easy to travel with. It’s suitable for age 10+ according to the box but I think kids could learn it from age 8.

I’m generally a fan of more complex, longer lasting games – the type that take at least an hour to read the rule-book – so this game didn’t exactly blow my mind! However, the other players I learned it with did enjoy it and appreciated its simplicity. I would highly recommend this game for anyone who is a fan of puzzle/logic type games and for fans of simple, minimal-rules, easy to learn games.

6
A nice, simple, easy to learn game for all ages and fans of logic/puzzles.
COMMENT AND DISCUSS
blog comments powered by Disqus