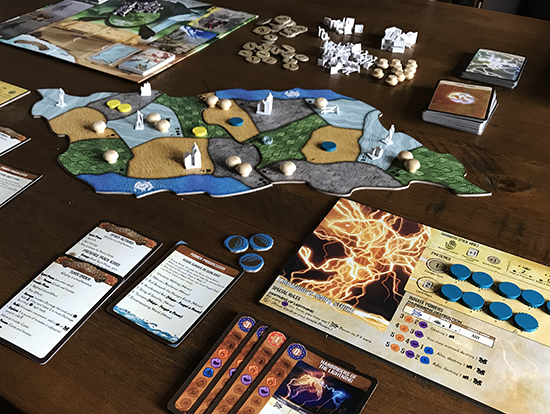 An ancient island is under attack from invaders attempting to drive the indigenous people off the land and build settlements. Contrary to similar game scenarios, you are not the invader – you and your fellow players are spirits working together to protect the island and drive the invaders off.

This is a hugely complex game and so requires quite a bit of set up and thorough study prior to starting, so make sure you set aside a whole afternoon or evening! There are many ways that you could approach this task, but here’s how I went about it:

Read the set-up section in the rules, and as you do, get out all of the pieces and set up your game. This will include:

Next, return to the rules and read the ‘Game Concepts’ and the ‘Sequence of Play’. These appear in the rule booklet with the sequence of play first, but I think that it will make more sense to read through it the opposite way-round. Once you have digested the basic content of the rule book, the best thing is to just get on and play.

For your first few games, some dynamics of the game can be removed or manipulated to help you get along with learning it. It is recommended that you:

The info that follows is very much filtered down to give you an idea of how the game works. The game is played in rounds and each round is made up of the following stages:

After all these steps you go back to step one again and so on until you meet one of the end game conditions:

There are eight different spirits, with increasing complexity, that you can use to play the game – some have more defensive capabilities and others are more offensive. Also, the board is made of four different panels that can be moves around to make a different island layout each game. Both of these factors mean that every game can be vastly different tactically, meaning that you can enjoy lots of games before it gets old!

This game, with its two-hour run time (potentially longer for 3-4 players), is not for the faint-hearted board-gamer, and that time-frame doesn’t include the hour or more it will take to get your head round the rules. I played this first as a two-player game and was able to get to grips with the dynamics first run through, but we were sadly defeated by the island. There is a huge about to remember and the rule book even points out that this will happen and no need to sweat over it! I found that it was the point at which I remembered all the dynamics that I actually started to win though, so it is crucial to try and remember.

After that I actually played the two-player game on my own (I controlled both spirits) to really get my head round everything. This enabled me to see just how important it is for players to co-operate – going in with your own personal game play just isn’t going to cut it. You have to make use of the cards that boost your opponents or work with them on strategy.

The level of teamwork required to actually gain the win (which as yet I have only managed playing by myself, as it’s a lot easy to co-operate with myself) is huge and so communication is a key part of the dynamic. I therefore can’t even comprehend how complex this game must be with three or four players. I may have to get a few proper two-player wins under my belt before attempting a bigger team and I would suggest that anyone else do it the same way. Also, if you are going to give this a go you really need to think hard about who you are going to play with, as it needs to be people who will work together with the same strategy. This could mean playing with casual games who just want to give it a go and aren’t too concerned about winning, or hard-core types who won’t sleep until they defeat the invaders, all I’m saying is don’t mix the two as it could be chaos!

Everything in the box is extremely good quality and the art work for the spirits to very good. All of the invades just being white in colour is a bit dull, but makes it easier when it comes to game play. Even the box itself is very well put together with more than enough bags for pieces and specially designed inserts to ensure that everything is stores neatly.

The rules are long, and set out in a rather odd order but I was able to understand the game purely from reading them rather than having to search for a YouTube tutorial!

This game is incredibly imaginative and detailed and I love it, despite having limited success so far. However, it is rather pricy so I strongly suggest that you do your home-work and make sure it is the right game for you before you purchase. If you like a game with a lot of detail and strategy and the added bonus that you can actually play it on your own (I see this as a bonus as sometimes you fancy a game and there’s just no-one else around) then look no further, this one’s for you!