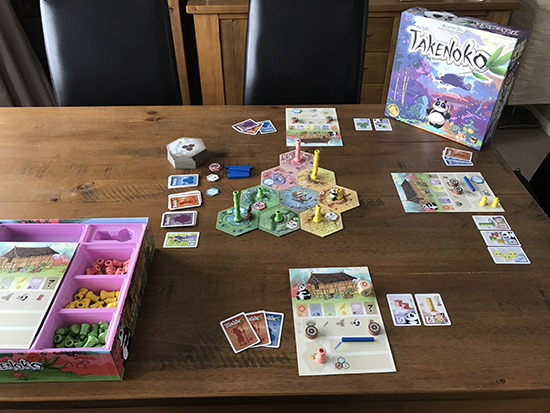 A cute cartoon strip at the front of the instructions, tells of how the Chinese Ambassador has delivered a giant panda as a gift to the Japanese Emperor from the Emperor of China. The Emperor entrusts the care of the panda to the gardener, who must now plant and grow bamboo to feed it. The problem is that the panda’s pretty greedy and is eating the bamboo almost as fast as the gardener can grown it. The premise of the game is that you, the court member (players), must help by planting and irrigating new bamboo plots, moving the gardener round to grow the bamboo and ensure the panda gets enough bamboo to eat. The key is to balance all three elements, as without plot the bamboo can’t grow and without the bamboo, the panda can’t eat!

You have a central hexagonal tile, which is the lake and provides irrigation to the surrounding crops, and a set of hexagonal tiles of three different colours that are shuffled into a pile and will gradually be placed around the lake to make up the garden landscape. You also have:

You start the game with three objective cards, one from each of the following categories:

Players take turns to role the weather dice and then select two actions that they want to complete, although sometimes the result of the weather die gives you the opportunity to take a third action. The actions you take are as follows:

You choose your actions based on what will best help you reach your objectives and once one is completed you place if face up in front of you. The game ends when one player meets the required number of objective (this varies depending on the number of players). That players gets the emperor card and then remaining players are allowed to take their turns until all players have had the same number of turns. You then need to add up the points gained by each player to find out who the winner is!

The layout of this game varies each time you play, so do your objectives, and those of your fellow players. This means that game play somewhat varies and you are required to adapt your tactics for each game. Having said this, the variance between games isn’t huge, meaning that you aren’t likely to get hugely addicted to this game like you may some others that are more complex.

There is currently one expansion for this game called Takenoko Chibis. This add-on introduces a female Panda to the scenario, and naturally this means that baby pandas have to be factored in too! Additional plots, objective cards and more bamboo shoots are also added into to the mix, stepping the game up and making it more complex and variable.

This is a lovely simple game, easy to understand and not too lengthy and complex. As I said, you aren’t going to get addicted and play it all the time. It’s going to be the game that you take off the shelf when you want to play something nice, gentle and familiar that isn’t going to tax your brain too much after a hard day at work. It is also a great game for families, as kids could get to grips with it from about age 8, or for playing with those friends who aren’t really into the ‘heavy’ board games with a million pieces and an encyclopedia of rules.

The pieces and box are of good quality and the instructions are nicely laid out and easy to understand. There is variety to the game play and the expansion pack adds complexity. With the average game length being about 45minutes and the set up/clear down being relative easy, this also adds to its appeal. One huge selling point for me is that it can be played with two players as a lot of this style of game often need three players to be enjoyed to their full potential, but that is not the case here. At a price of £26-£30 (£15-£20 for the expansion) this game offers great value for money too!