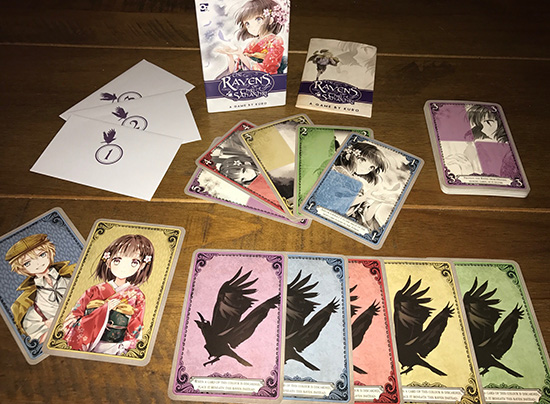 The Ravens of Thri Sahashri

This game is based on the story of Feth and a girl he falls in love with called Ren, a girl forced into the role of a courtesan and kept imprisoned. Feth helps Ren escape captivity but she is left traumatised by her experiences and many of her memories have become repressed, causing her to become weak and fragile. Through the game Feth will attempt to help Ren regain her memory and, if successful, rebuild her heart.

Ravens is an easy game to lay out:

It is key that Feth starts the game by putting a selection of differently coloured and numbered cards into the Atmen, to give Ren choices when she has to pick from these.

If Feth draws a raven card these are placed into a ‘Raven Row’ in front of him. The effect of this is that whenever cards are discarded, if the colour matches that of one of the revealed ravens, the cards are placed under that raven.

Any crows not chased away will eat the cards underneath (obviously not literally). This just means that these cards are removed for the rest of the game.

Following Feth's turn, Ren must take one card from the Atman and place it in front of her to represent a poem. The poem has four lines which each start with one of the cards in Ren's heart (the four cards dealt face-down during the set-up). The key to completing a line of the poem is to get the values on the cards to add up to the set number (seven for the first three lines and five for the last line). For example, if the first card, that only Ren can see, has a value of 3, she will want to take a 4 to complete the line, or if one is not available she’ll need to take a 1,2 or 3.

Cards placed into the poem lines are turned face-up and then players are free to use the abilities, at which point the card is turned sideways. Once a line of the poem is complete Ren tells Feth that it is complete.

Once the poem lines are complete, the round is only won once all cards left in the Atmen match the colour of the cards in Ren’s heart (the 4 face down ones). Ren must continue to draw and play at least one go per turn and Ren must continue to remove a card from the Atmen each turn until this is accomplished. Hopefully, throughout the game Ren has given indications of which colours need to be in the Atmen.

You have to complete three poems to win the game, so following completion of one poem, to set up for the next you…

For the third and final poem there is an additional rule. Ren must complete a line of the poem on each of her turns. If she is unable to do this, the game is lost.

Remember: This summary gives an overview but there are a few more nuances to the rules so do study them before you get going.

Here are a few tactical pointers:

Remember that there are only 35 memory cards in the deck. If you race through them you will run out of cards before you complete the game. However, if Feth doesn’t play enough cards this could also get you into trouble. Therefore, the key nuance of the game is that find the fine balance between the two.

Feth must take note of which cards Ren takes and how she chooses to use her turn as this can indicate what he needs to put into the Atman.

Matching the coloured cards in the Atman that add up to 7 is also crucial.

And don’t underestimate the need to use the abilities on the cards.

This is a really interesting game with a dynamic that I haven’t come across before. I enjoy the fact that you are unable to communicate with your fellow player other than the cards that you select, as this creates a need for deduction and analysis in order to get the win. On the down side, it doesn’t necessarily make for the most social co-operative game.

Some of the more intricate rules are a little tricky to get your head round, and I found that the instructions weren’t completely clear on some of them. I would definitely recommend you find a youtube tutorial to help you at the beginning. However, the fact that it is quite complex works in the game’s favour as you won’t (if my experience is anything to go by) win straight off the bat. You and your partner really need to get your head round the tactics and make use of all the special abilities available in order to be successful.

This game has beautiful anime style artwork, some of it rather chilling, as it shows some sad scenes as well as happy ones, from Ren’s past. Sadly, a lot of the images are repeated because of the nature of the game, so there is not a huge amount of variation in the artwork. The background story is laid out in the rules and gives the game great context to the images too.

Once you win the game by completing the three poems you are allowed to open the first of three numbered envelopes that come with the game. This envelope contains a continuation of the story as well as additional rules to add it to make the game slightly more difficult. Once you’ve won with these rules there is a second envelope contain the same and a then a third envelope for after you next win. All of these extra bits of continuing story add a lovely touch to the game and make it feel like you are being rewarded for your success.

The whole game fits into a small box so is a great one of taking away on holiday and you should be able to pick it up for a really reasonable price point (£11.68 on amazon at the point of writing) making it a great gift for any game fan. This is definitely a game that I’m happy I picked up and will continue to play until I have successfully completed all the variations – yes I’m still working on that!!!