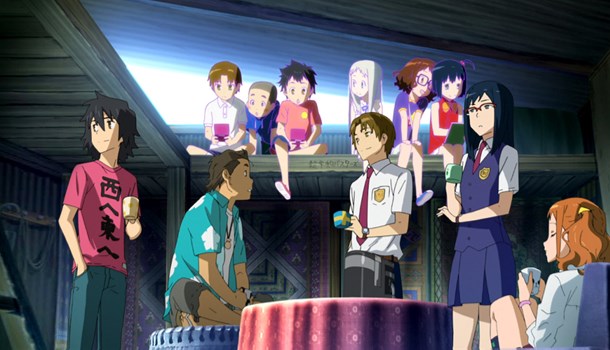 Anohana: The Flower we saw that day Collection

The Super Peace Busters were a close group of friends who would play together at their secret base in the forest. This all changed after the tragic accidental death of one of the group's members, Menma. Five years later, the group have gone their separate ways. Life goes on until Jinta, the leader of the group, whose life is going nowhere and has secluded himself to his home rather than go to school, is suddenly haunted by Menma's spirit. She looks older, actively talks to him and wants to get the group together in order to grant a wish she had before she died. Jinta must now try to reconnect with his childhood friends and fulfil Menma's wish in the hopes that she can pass on to the afterlife.

From the synopsis you'd Think Anohana would be a really sad, dramatic show that will make people cry. And you'd be right. Anohana has gotten a reputation over the years for being a sad anime that can melt even the stoniest of hearts and bring tears to the driest of eyes. Re-watching the show via this Blu-ray release has made me realise how clever and calculating the show is in going about displaying its themes and overall message. The show starts with the characters all doing their own separate things while trying to forget the past, but as the show progresses we see that each member of the group - and even Menma's family - is dealing with grief in their own way.

The show expertly demonstrates how people will react to hardship, pain and loss in different ways. Each character in Anohana has a different coping mechanism, whether it be trying to fit in elsewhere and forget the past, travelling the world to forget what happened, focusing entirely on school work, refusing to move on and even giving up on life in general. Anohana focuses on each character and their personal struggles, each blaming themselves for teh tragedy due to the circumstances that led up to it.

This also ties into the other theme of the show; the relationships. From the outset it is clear that the characters have feelings of love for one another, in some cases they feel these emotions are preventing them from moving, instead obsessing over Menma's death causing conflict and tension within the group.

Anohana does a great job of creating natural conflict between the characters who were once incredibly close. One of the subtle ways this is presented is in how the characters address each other; As kids they all had childish nicknames, but in high school they coldly use proper etiquette and refer to each other by last name only. When a character slips into using a nickname or catches themselves doing it, this is a clear indicator of how someone is feeling at that point. It's a clever narrative device.

While the show can be dramatic and rather heart-breaking, there are a few moments of comedy too. These are small jokes and visual humour gags involving Menma and her various interactions with Jinta. There's also a very good parody version of Pokemon in the show that looks almost exactly like the real thing. While the comedy helps lighten the mood, it doesn't change the tone or take away from the overall experience. Thankfully it is used sparingly in order to lighten the mood and offer a bit of respite from the dramatic events on display. Speaking of which the English dub of the show is rather good, handling the dramatic aspects with great care and delicacy whilst also providing a good amount of snappy dialogue to elevate the comedic aspects.

This all tie together to make Anohana an emotional (and at times difficult) show to watch. Those who have lost loved ones or had close friends but somehow drifted apart will be able to relate to the characters and what they are going through. Speaking quite honestly here, most of the cast are unlike-able but what makes them work in the show is how human they appear. They are all selfish, flawed characters, but this clearly comes from a place of sorrow and anguish. Watching the characters accept what happened and try to better themselves in a bid to move on is the main emotional crux here. This all culminates in quite possibly one of the most emotional last episodes of any anime. The pay-off here is what cements Anohana's place as one of the most moving anime people have seen. And it deserves it's title.

After so many years Anohana is still remembered fondly and for good reason. This is a detailed and harrowing display depicting the effect grief can have on people who have drifted apart and the hardship in coming together for a common goal, in this case to pay their respects to a dearly departed friend.

9
An emotional story about the pain of loss. A genre classic.