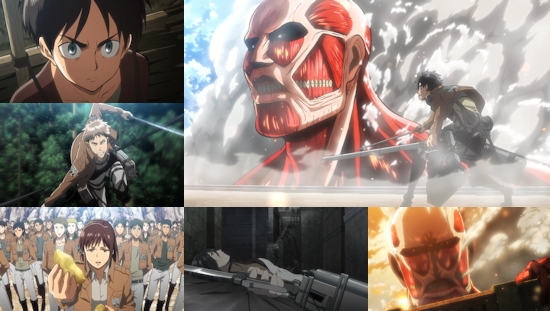 As much as many of you reading this review probably love and enjoy a wide variety of anime, it's only rarely that we see a series break out of our small niche and have an impact upon the wider consciousness of fandom while (all-importantly) also bringing newcomers into the fold. Death Note and Fullmetal Alchemist are recent examples of anime adaptations which brought fresh faces to the scene, and we now have a new face staking its claim as an entry point for newcomers - Attack on Titan. Simply look around at recent conventions or talk to fans and Attack on Titan is everywhere, bringing with it a massive amount of hype and buzz - now, the first series is arriving on home video in the UK, so will this new behemoth of the anime world continue to draw in a large and growing audience?

In Attack on Titan's fictional setting, it is the year 845, and a hundred years have passed with humanity enjoying a fragile but sustained period of peace. The threat to this relatively safety is not simply another race, creed or country, but massive humanoid creatures known as Titans, who appeared mysteriously with nothing but a hunger for human flesh to show as a reason for their existence and went on to decimate the human populace. In response to this, the remaining pocket of humanity erected vast walls to protect themselves from this terrifying threat, and it's these walls which have kept them safe from harm... until now.

While those guarding the perimeter and the populace within have become complacent, even the most well-prepared of armies would be left powerless in the face of what unfolds - a Titan so vast it peers above even the top of these massive walls smashes through it, while another seemingly armoured Titan tasks itself specifically with smashing through the next layer of defences which stand in their way. Thus, in no time at all the outer wall - named Maria - is breached and Titans of all shapes and sizes pour in, devouring everything in their path and leaving those still capable of doing so scrambling to escape. The casualties are massive, and at the centre of our view of these horrors is a young man named Eren and his friend Mikasa, who see the former's mother killed before their very eyes.

It's this image that both haunts and fuels Eren over the subsequent years, as the crowded living conditions caused by the loss of so much territory only pushes the death toll higher, creating a generation who are thirsty for revenge - or, in some cases, hungry for a career which will take them within the city's innermost walls and the safety that this offers. As he embarks upon military training little does Eren know, however, this his role in the fight back against the Titan's might just be the most pivotal of them all...

Take even the most cursory glance at this first half of Attack on Titan, and it isn't difficult to see why it's become so popular. Simply from its concept alone, the series stands out as something unique and a world apart from your average popular shounen series - it has a great core construct, and delivers upon it in brutal fashion with a frank presentation of its world as a place where death is a constant threat and, ultimately, there's nowhere to run. This is further accentuated by the fact that nobody within the main cast seems safe - anyone and everyone is just a Titan's jaws away from vanishing from the cast, and watching how these various characters react to the perils and circumstances thrust their way as any attempts at bravado and heroism come crashing down around them is just one of the many joys within the series.

As with any runaway hit, there's also something of a backlash against Attack on Titan from certain groups of anime fandom, and this too is easy to reconcile within the first half of the series - one major turning point in these episodes is such a huge seismic shift for the show that it will undo all of its good work up until that point for some of its viewers. However, if you're willing to go with the flow and simply accept the premise presented to you as it pans out, then the core strengths of the series remain undiminished by its more surprising events; if anything, its increased stakes and future promise at this point only add to its compelling qualities.

One other area where Attack on Titan got a fair amount of flak when it originally broadcast and streamed was its animation quality, which took some significant nosedives in places. Thankfully, much of this is fixed for the home video release - make no mistake, there are still an increasing number of static shots and examples of heavily limited animation throughout these episodes, but much of this is with a view towards saving its budget for the show's big action scenes, which are delightfully fluid and energetic as the case swing between buildings and across rooftops in their attempts to either avoid or cross paths with the Titans. The show's insistence upon thick outlines and a very particular art style also works in its favour, giving a more striking look to a series which isn't the most colourful visually and keeping things easy on the eye, helped along by lots of instantly recognisable character designs.

Speaking of new additions for those who have previously only viewed the show's streaming release, this DVD and Blu-ray edition also contains a full English dub of course, and to put it simply it's a terrific effort. With the sole exception of Levi (who doesn't quite work as well as he should in the English iteration), the entire cast is pitch-perfect in their representation of the show's various characters, and aside from a few choices of wording which shift things a little too far from the source material for our liking it's a superb way to watch the series. Indeed, we might even suggest that this is the preferable way to enjoy the show particularly if you have a multi-channel sound system, as the English language track's 5.1 mix really brings out the full power of the show's incredible soundtrack and its effects. If, however, you're insistent upon sticking with the original Japanese audio, its subtitles are sound and mostly error-free, and even though subtitle timing feels a little "off" on occasion it's of no impact to your enjoyment or understanding of what's going on.

One technical issue we do have to raise with this first part of the series are its chapter markers which are, frankly, a complete mess - from episode three onwards they're simply unusable - try to skip the opening theme (which you probably shouldn't, as it's already become iconic for a reason) and you'll be dumped into some random point mid-episode, while mid-way chapter markers are a hit or miss affair as to where you'll land. It's an immensely frustrating problem to encounter (especially if you're watching these episodes en masse), and it would have been better to have no chapter markers at all rather than this poor effort.

This problem aside, all is as it should be - those picking up the Collector's Edition Blu-ray release will receive a bonus DVD (yes, a DVD not a Blu-ray) with a "Making of" feature and some chibi theatre extras which the completests will enjoy, plus an additional insert booklet which we haven't seen for ourselves at the time of review). If you're on the fence about which edition to pick up, the fast movement on show at times would lead us to suggest that - as per usual - the Blu-ray edition of the series is the way to go, and given that part two's Blu-ray will contain the second half of the aforementioned booklet the Collector's Edition may well be the way to go.

Such minutiae aside, there can be no doubting that Attack on Titan's first half is worthy of its role as a break-out megahit for the anime business - it makes enough of a break with the normal formula of successful series to feel fresh and unique while still learning from what has fuelled other much-loved franchises. Provided its concept appeals and the prospect of lots of blood and guts isn't off-putting, square away any pre-conceptions and expect the unexpected and you'll enjoy the episodes spread across these discs enormously. Indeed, one could say that you'll be hungry for more...

9
Great characters within an engaging concept and setting are coupled with expert execution, to ensure that Attack on Titan lives up to expectations and then some.
COMMENT AND DISCUSS
blog comments powered by Disqus