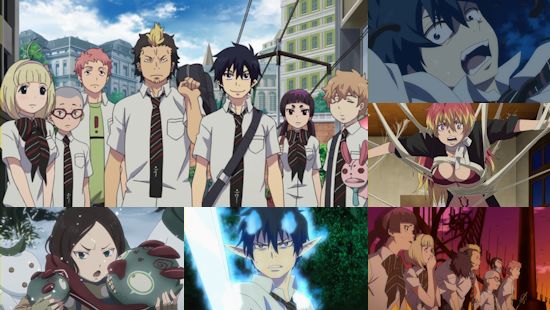 Subtitle-only or not, the first half of Blue Exorcist seems to have done a relatively good job of tapping into its base of readers of the original manga here in the UK, and despite deviating from its source material on occasion with less than spectacular results, that first part of the series was nonetheless a success overall.

As we enter its second half, and another dose of twelve episodes, we quickly see the series deviating in far more fundamental ways from its manga incarnation, reaching that critical juncture where there simply isn't enough manga left to adapt for a series that's determined to finish its major storyline in a single series and thus leaving this animated outing to "go it alone".

Before that however, we begin the second half of Blue Exorcist with another training exercise for our wannabe exorcists, with a training camp offering up a competition to retrieve lanterns from a "haunted" forest - a contest which has no shortage of difficulties in its own right, all of which are impressively overcome before being overshadowed by the appearance once again of Amaimon to disrupt things and provoke Rin.  Given that angering Rin has never been the toughest of assignments, it's no surprise that the resulting chaos ends with Rin revealing his true demonic nature to all and sundry, prompting shock from his friends and a swift response from the Vatican itself.

While this state of affairs should set the tone for what is to come, as Rin struggles with the loss of faith in him exhibited by his friends now that his secret is revealed, this is instead the point where Blue Exorcist's animated form strikes out in its own direction... a direction that is, to be frank, pretty run-of-the-mill.  Instead of any character-driven drama of note, the series instead chooses to build towards an action-oriented finale packed with conspiracy and threat as Satan himself looks for a wait to unite the worlds of demons and mankind - a mission that Satan embarks on for a surprisingly human reason, to the point where it's almost a little too soppy and daft to be believable.

That isn't to say that this climax to the series is terrible - its action scenes are frequently terrific, and the story presented here by A-1 Pictures is accomplished in its own right.  However, it feels very obviously "bolted on" to the story prior to that point, as the motivations and actions of characters become muddied or simply out of character for the individuals concerned, while some of the subtlety of earlier story arcs which were a joy to watch in themselves are replaced by a more bombastic and overtly shounen style.

This makes Blue Exorcist's second half a tough one to really pin down - if you haven't read the original manga's UK volumes to date then it might not jar with you quite so badly, and its animated finale is satisfying in its own sense, but for anyone with awareness of the source material it doesn't hold a candle to the efforts of the "proper" storyline ignored by this anime adaptation but held within the original.

That aside, this second volume of the series is well presented enough - the show's animation quality can be variable but is broadly reasonably strong, its soundtrack is frequently downright tremendous from beginning to end, and Manga Entertainment's treatment of the series can't be faulted, which includes its subtitle track which appears to be free of major errors or missing lines.  As per part one, this volume also includes the final Ura-Ex short episodes from the original Japanese releases - unfunny they may be, but it's still good to see their inclusion here.

In closing then, Blue Exorcist ends as a solid shounen series, but one overshadowed by its decision to provide an anime original ending that feels like an uneasy fit with what has gone before - an issue that could rightly be raised about all of the anime original content throughout this series, in fairness.  It's enough to prevent it from being any kind of classic, although with some strong characters and a suitably cool concept it still carries a decent amount of entertainment value for anyone suitably enamoured with the series after its first volume.

Japanese stereo audio with English subtitle.  Extras consist of a series of comedy "Ura-Ex" skits, web previews for the series and textless opening and ending credits.

6
Its still an enjoyable and entertaining shounen series, but its anime original ending doesn't live up to the promise of what has come before.
COMMENT AND DISCUSS
blog comments powered by Disqus