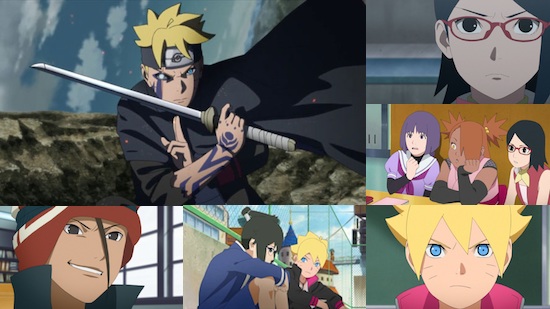 I’ve been reviewing Naruto here on UK Anime for a while now, going all the way back to Box Set 14 of Naruto Shippuden, to be precise. So, naturally, it falls on me to welcome the “next generations” [sic] into the fold. The first question I had when approaching Boruto: Naruto Next Generations was whether or not the series brought anything new to the table, or if it was just more of the same old Naruto formula? While these first three episodes only offer a glimpse of what is to come, so far Boruto is very firmly in the latter camp.

By far the most interesting aspect of the series so far is how it begins. Boruto: Naruto Next Generations starts by giving viewers a glimpse of a mature, though somewhat ruffled looking, Boruto. He is facing off against a previously unknown foe, who goes by the name Kawaki. Kawaki threatens to send Boruto to the same place he sent the seventh Hokage, while also declaring the age of the Shinobi is over. The camera pans back to show a ruined Konoha, then the opening credits roll...

Interestingly, that’s also the only part of the series so far which is cannon. Meaning it is the dreaded f-word (filler) which makes up the vast majority of the content so far. Boruto: Naruto Next Generations is set sometime before Boruto: Naruto the Movie; indeed it is set before even the manga which begins roughly where the movie does. While both the movie and the manga kick off at around the time of the Chūnin exams, the series begins years before. So, post opening credits, we find ourselves “several years” in the past with Boruto and chums about to join the Academy, just as Naruto and his comrades did at the beginning of Naruto Unleashed.

The first episode revolves around Denki, the son of a wealthy industrialist, who is being bullied (well, regularly mugged to be precise). Not unsurprisingly Boruto comes to his aid, and in more ways than one, especially after Denki finds himself host to a mysterious dark entity, which seems to bring to the fore his darker impulses. The second episode sees Boruto struggling with the pressure of being the Hokage’s son, and being seen as riding on his father's coattails. Though ultimately he wins around many of his classmates by sticking up for a friend and taking on the school bully. Finally, the third episode sees a nervous Metal Lee deal with his performance anxiety (his shuriken technique gets a little wayward if he’s being watched) by going on a murderous rampage, fuelled by the same mysterious dark energy which appeared in episode one.

Thus far Boruto: Naruto Next Generations feels very much like the original Naruto series, though perhaps slightly tweaked. The characters are for the most part facsimiles of their parents, while the storylines are nothing we haven’t seen a thousand times before. To a fan of the original series, that might not sound too bad: However, what lets down this series is the lack of any real substance. Naruto, for all it’s eventual foibles and filler, started strongly and hooked the viewers interest in ways that Boruto simply does not at this stage. That the most interesting aspect of the series so far is the only part which is canon is telling, and doesn’t bode well for the rest of the series. Perhaps things will pickup once it meets the source material? As things stand Boruto: Naruto Next Generations is little more than a rehash of old ideas, which has been given a fresh coat of paint to disguise the cracking plaster underneath and has glossed over much of the character which made the original so beloved in the process.

That’s not to say Boruto is a bad series, it just doesn’t stand out amongst a crowded Shonen market. Perhaps the biggest take-away from the series to date is disappointment. The problem here is that Boruto: Naruto the Movie showed just how good Boruto: Naruto Next Generations could and should be, it set a bar which the series doesn’t even come close to - yet. If the series can hit the highs of that movie it will be well worth persevering with. However, on current form those highs seem a long way away.

You can currently watch Boruto: Naruto Next Generations in streaming form on Crunchyroll.

5
Nothing new and the absence of anything to really hook the viewer make for a disappointingly pedestrian opening.
COMMENT AND DISCUSS
blog comments powered by Disqus