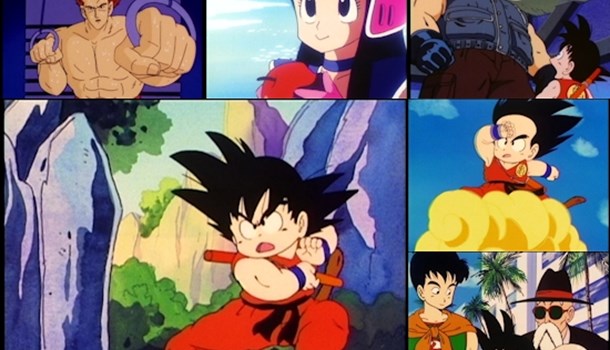 The World Martial Arts Tournament is over, but the adventures are just beginning for Goku as our focus returns once again to the Dragon Balls, and more specifically the Dragon Ball given to Goku that is now missing.

Unsurprisingly, this search over land and sea is really little more than a cipher to send Goku into danger or into scenarios where he can play the hero, whether it's resolving a drought, exploring deep beneath the ocean or fighting against mechanical monsters in a series of circumstances that eventually sees our protagonist joined once again by Bulma as well as Krillin to assist in Goku's search.

The mainstay of this second batch of episodes around which many of these adventures revolve is the introduction of the Red Ribbon Army, a suitably nefarious military force with an equally suitable villainous leader who is hell-bent upon collecting all of the Dragon Balls scattered around the Earth for some doubtless less than ethical ends. They might boast guns and those aforementioned mechanical behemoths, but it seems that nothing is going to faze Goku in his pursuit of both justice and the Dragon Ball which belongs to him, which leads to some potentially dangerous conflicts for our diminutive hero.

Although there's a certain amount of fun to be had from all of the machinations outlined above, it has to be said that the Red Ribbon Army's presence does outstay its welcome massively over the course of this season of the show - formidable foe they might be but as a villain of the piece as it stands neither the entity or its leading individuals really have enough character to drive things along to the required degree. As a result, things get stale rather quickly throughout each phase of this particular storyline, and even other changes or additions to Goku's band of buddies can't really gloss over the fact that their adventures in this volume are rather dull.

That aside, the formula laid down in the first season of Dragon Ball is all present and correct here - lots of comedy, much of which is quite childish in nature, coupled with flashes of action in the midst of Goku's adventures. Compared (perhaps unfairly) to the later Dragon Ball Z it still lacks any real punch - proverbially, at least - and its comedy is most certainly an acquired taste, but anyone who has enjoyed the first season will continue to find enough of those core tenets to enjoy season two even if it lacks the entertainment value of those earlier episodes.

As per season one, video quality here is good - a little grainy and noisy as you might expect given the age of the source material, but otherwise a clean and reasonably bright transfer without any issues that will impede your viewing experience.

With only a mono Japanese soundtrack on offer, chances are you'll be wanting to stick with the show's English language dub, which remains energetic and proficient even if it does introduce some horrendously poor attempts at foreign accents from the cast as it mauls attempts at Indian and Scottish voices amongst its low points. It's also interesting to see how the Japanese and English audio presentations differ, with Japanese insert songs replaced by some occasionally strained English narration that tries to fill the time rather awkwardly on a few occasions. As a whole though, Dragon Ball's English dub remains as enjoyable as ever and suits the tone and pace of the series almost perfectly. If you are sticking with Japanese, you can still choose from two English subtitle tracks - one that mirrors the English dub, and another which more faithfully translates the original Japanese scripts.

Having warmed somewhat to this original iteration of Dragon Ball, we have to confess to being a little disappointed by this second volume - it struggled to capture either our interest and imagination and as a result feels weaker than season one, without any particularly strong material to bolster our interest. That said, its formula remains consistent and if you enjoyed the first season's comic turns then there's certainly plenty more of that here - just don't expect any major story progression across these episodes.

5
Dragon Ball's second season continues to make use of the strong formula established in season one, but without the same level of interesting stories and characters that the first release established.
LATEST REVIEWS