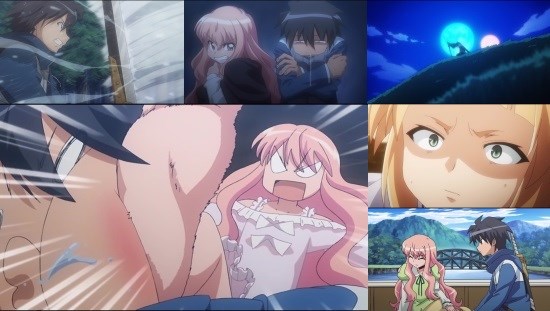 Continuing from where the first series left off, The Familiar of Zero: Knight of the Twin Moons sees Saito resigning himself to being Louise's familiar. Although still complaining about his position, more pressing matters are at hand as the political turmoil currently engulfing the magical land Saito has found himself in has escalated to a full-on war. At the request of the Princess (soon to be Queen) Henrietta, Louise and Saito are enlisted as undercover agents in her service whilst all the male students at the magical school are conscripted into military service. During the course of the series Saito and Louise start to come to terms with their feelings for one another, which also conflicts with their ideas on social norms and attitudes towards war. Whilst Saito is very anti-war and hates conflict that can result in death, he decides to go along with Louise in order to protect her from harm.

With the characters established from the previous series, The Familiar of Zero: Knight of the Twin Moons wastes no time in getting into its plot. Whilst the first series mainly set up the characters and the premise of Saito being trapped in another world, this series focuses on expanding the world and telling a very political and war-focused story while still retaining the same comedy hijinks and harem escapades previously found earlier in the series. This time though. the harem comedy mainly focuses on Saito, Louise and two of the other female characters in the show, and these events tie into the plot rather seamlessly with Saito having to escort certain female characters under the pretence of being their bodyguard, and other such events that help to deepen the characters by showing their motives with regard to certain things. While it can come across as off-putting, the comedy and harem shenanigans actually work better within the context of the series than they previously did.

The main reason for this improvement is how much weight and importance the story of the series is given this time around. The series wastes no time cutting away from the actual plot to harem comedy, but now it actually makes it work within the show. It really helps that Saito and Louise have been given a bit more character development this time around and actually speak to each other about serious matters with regards to both what is currently happening in the world and their relationship to one another, tempered only by the continued presence of the whole master and slave aspect of the show, a facet which remains from the first season and has several scenes of Louise beating Saito, at times still managing to go a bit far. The only solace to this is how unphased Saito seems by the ordeal at times, and how much concern Louise has with regards to Saito's well-being at others. While the first series also had this aspect and made both the leads rather unlikable, they manage to redeem themselves with their character growth and general increase in communication this time around.

With the main cast growing and heading in the right direction, there are also some great side characters and sub-plots that not only tie into the series really well but are great stories in their own right. The best of these is the introduction of the captain of the unit guarding the school. This character not only plays a key role in the main plot but is given an interesting back story and a sub-plot which at times becomes as, if not more, interesting than the main story. In this regard the series actually creates a very interesting war story, with politics handled really well and with characters who are growing and developing throughout.

In the midst of all this there are various discussions on honour, war and the attitudes between Saito and nobles of the world he finds himself trapped in. As the series mainly deals with war there are a few action scenes scattered throughout -  this is the show's major shortcoming and the one aspect that really shows that the series is now eight years old. Animation in fights is rather limited, resorting to just a few magic attacks, charges and strikes with swords, many of which are over quickly. That being said, the highlight of the action takes place in the final episode and has quite a visually impressive stand-off compared to the series' visuals. Those wanting a bit more action will find the series lacking, but the story and characters make up for these shortcomings.

Overall, The Familiar of Zero: Knight of the Twin Moons is a vast improvement over the first series. Now that its characters have been established the series can focus on delivering a rather interesting story - while some characters may start out as unlikable, they start to develop enough to the point that the show has a rather strong cast that can actually grab the viewer's attention and the action scenes, while looking rather dated, are also serviceable enough to be entertaining. Finally, it should be noted that for those who purchased season one of the series last year that this time there is no English dub created and the series is subtitled only.

7
An Improvement over the first series in every way; an intriguing fantasy war story disguised as a harem comedy.