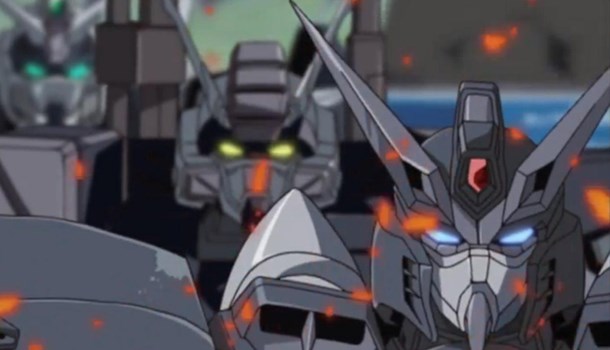 Despite my many years devoted to anime, I haven't seen much Gundam outside of the odd snippet of Gundam Wing, so I was curious to see exactly what it was that made fans so loyal to the series.

Gundam Seed appears to be a fine example of the series - set 11 months into a galactic war between Earth and its colonies, the story begins at Colony Heliopolis, a neutral settlement that considers itself outside of the war between the two factions. Unfortunately for the inhabitants of Heliopolis, their home has been the staging ground for a set of developmental new mobile suits, the G-Weapons - and the enemy has found them! Once the colony is attacked, teenage student Kira Yamato is drawn into the conflict and finds himself pitted against his childhood friend Athrun Zala, a Coordinator (advanced human) who has joined the ZAFT forces

It's the conflict between the two friends that takes centre stage throughout these two volumes (and indeed, the series) and both parties have very mixed feelings about one another’s involvement in the war - both are Coordinators, and as such are treated with hostility by the human Naturals (those who have not been genetically modified). Athrun believes Kira to be a traitor to his kind, whilst Kira can't understand why a man who once openly despised war is now waging it.

This intense rivalry inevitably supplies a great deal of eye candy in the form of some amazing battle sequences, with armies from both sides extremely well equipped with the very latest in GUNDAM hardware, and the resultant conflict is beautifully animated carnage.

Whilst many series that deal with war and the resultant death toll can be extremely casual about their issues, I found Gundam Seed to be highly sympathetic to its victims, and both sides have seen heavy and desperately sad losses, which makes any attempt at peace highly emotive and increasingly difficult. I was also impressed by the themes the series throws up - prejudice and racism in particular come under Seed's microscope, and it becomes difficult as a viewer not to empathise with everyone's motives

Although it takes an episode or two to really get going, Gundam Seed is a fantastic character-driven space-opera. With sharp character and mecha design, not to mention a rousing orchestral score running throughout each episode, its hard not to be impressed with the quality of the production values.

The disc itself features a crisp picture and a superb English dub - I was very impressed with the cast, who have exceeded even Beez's usually excellent standards. Although the disc is light on extras (textless opening/closing animation, character bios and trailers) each disc comes with a generous 5 episodes. Given the 50 episodes this series encompasses, that's 10 DVD's to look forward to.

In summary, it would have been easy to produce endless battles and leave the writing as an afterthought. Happily Gundam Seed enraptures you not with its abundant beauty, but with its ideas.

9
An epic and intelligent sci-fi opus that promises much for future volumes.