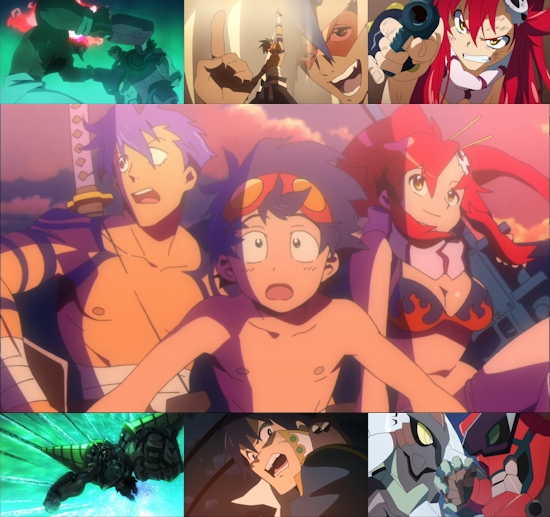 It's hard to know where to start when it comes to discussing Gurren Lagann - from controversy to its eventual success as a much-loved and well-respected series, it's a show that has burned as brightly as the stars in the sky that act as inspiration for its cast, and as passionately as that cast itself in the process. The result is a series that is intensely personal for many, and now it's been granted a brand-new Blu-Ray release courtesy of Anime Limited, bundled with numerous extras and allowing the franchise's two theatrical films to enjoy their first UK outing in the process. The wait for the Ultimate Edition of Gurren Lagann might have been long, but now it's finally here was it worth the wait?

Our story begins with Simon, a boy who dwells - along with the rest of humanity - deep underground, the only place safe from the monsters which roam the surface. Although this existence doesn't faze Simon particularly as a boy who loves nothing more than to dig, his "big brother" Kamina prefers to turn his eye skywards, his head filled with dreams of the surface and far beyond.

Never one to miss an opportunity, Kamina's big chance to break free from the mockery of his village peers comes when one of these so-called "Beastmen" crashes through the ceiling while pursued by a feisty young eye-catching girl. In the ensuing chaos, Kamina and Simon find themselves joining Yoko (the girl in question) in the fight against this terrifying creature, which in turn leads all of them on a journey beyond their wildest dreams.

From its humble beginnings, much of the magic of Gurren Lagann comes from its continual, spiralling escalation - what begins as Kamina's simple desire to see the sky shifts quickly into a battle to rid the surface of the beings that subjugate humanity which itself sees our ragtag group of heroes gaining ever greater war machines to aid their battle. By the time we reach its second half the gang aren't so much looking at the stars as joining them to fight amongst them, and by the end of the show we've reached a place unrecognisable from those humble beginnings.

Most series that might attempt such a grandiose, wide-reaching narrative would probably stumble and fall at some point, but somehow Gurren Lagann manages to keep its focus intact and its timing impeccable from beginning to end, and for all of its larger than life events there's a distinct and believable thread that runs through the story from beginning to end and makes watching the series incredibly satisfying. The journey from catacombs to the cosmos rarely ceases to be a memorable experience that burns with passion one moment and stings with salty tears the next as its tales of bravery, heroism and loss stack up. Provided you buy into its larger than life premise and world, there are few experiences more rewarding than that offered by Gurren Lagann.

Aiding that compelling narrative is the presentation of the series - visually the entire show is brash, bold, colourful and fluid to match its outlook, and Taku Iwasaki's thumping, insistent and eclectic soundtrack established itself as a classic for a reason and continues to serve its purpose of powering the show along admirably. Certainly, there are times when its animation quality clearly takes a dip (made even more obvious in this High Definition transfer), but such is the show's character that it can usually shrug off these moments without issue.

Although not natively animated in full HD, this Blu-ray treatment of the series still looks superb - its colourful aesthetic is perfectly suited to the benefits of the format, and its spells of fast-paced action also enjoy stepping away from the limitations of DVD. As always with such releases, whether your viewing experience will benefit sufficiently from the move to Blu-ray is a matter of personal preference, but in the case of Gurren Lagann's Ultimate Edition its collection of on-disc extras, including the show's Parallel Works shorts and its two theatrical movies, will possibly be more than enough to tempt you.

On that topic, we should at least briefly mention those two movies, which serve as a retelling of the story with additional scenes and animation to accompany them. Although both enjoyable, these films do manage to lose some of the enjoyment and impact of the original series - the second movie in particular tries hard to raise the stakes further to the point where it's arguably trying too hard to "be Gurren Lagann", and ultimately ends up detracting from what makes its story so razor-sharp in its ability to cut to the heart of its entertainment value. The Parallel Works shorts which accompany those films are interesting and fun and worth checking out, although our early copy of the release was missing any sign subtitles for this particular aspect of the release.

There's so much more that could be said about Gurren Lagann, but such is the compelling way in which it delivers its story and message that it deserves simply to be watched and enjoyed rather than dissected in a review of any kind. What we will say however is that the series is a perfect tonic to the depressing sense that the modern world can give you that humanity is unworthy of its place on Earth - it might be entirely fictional, but its journey into a world where anything is possible through friendship, unity, guts and drive is an inspirational one that shouts at you to get off your backside and do what you want - or need - to do rather than simply bemoaning your lot in life. The show is far more than a simple motivational speech, and can be enjoyed without any soul-searching, but Gurren Lagann is heart-warming in such a unique way that its little wonder that it's proved to be so enduringly popular. Thus, this Ultimate Edition treatment is well deserved, and a near-perfect offering allowing fans of the series to indulge themselves in a franchise rightfully viewed as a classic.

English and Japanese stereo with English and French subtitles. Included in this Ultimate Edition are all 27 episodes of the series, the TV broadcast version of episode 6, both films and a collection of all Parallel Works short films. Extras consist of "Yoko Goes to GAINAX" feature, Sazigen 3DCG test animation footage, storyboards, clean opening and endings, music montage.

9
This modern classic gets the treatment it deserves, and the result is a must-have for fans of the series.
COMMENT AND DISCUSS
blog comments powered by Disqus