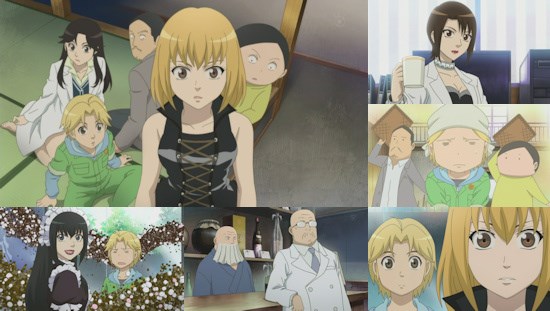 It's an issue that I've discussed before in streaming anime reviews in the past, but it really is tricky when a second season of a given show makes itself available to the UK in streaming form when its direct predecessor isn't legally available to watch.  Exactly how do you pitch such a review?  We face just such a problem with the emergence of Moyashimon Returns on Crunchyroll this summer, as it continues (as the title suggests) directly on from the first season of Moyashimon which never found a home outside of Japan, although the original manga from which it was adapted did see a couple of volumes reach the west before the cancellation of those releases.

In short, Moyashimon is the tale of everyday life at an agricultural college, albeit via some characters that can hardly be called "everyday".  At the head of it all is our protagonist, Tadayasu Sawaki, a young man with an extraordinary ability - he can see and communicate with bacteria and microbes.  In comparison, the presence of a cross-dressing best friend and a researcher with a penchant for wearing what is effectively bondage gear alongside her lab coat seems pretty mundane, and Sawaki's feisty female best friend Oikawa barely merits a mention as a result.

Although Moyashimon Returns does give a little bit of a reminder as to what's going on within the series, its "recap" is just that - a gentle nudge for existing viewers of this series to allow them to recall the current state of play.  Put simply, this is nowhere near enough for newcomers to the series to pick up on all of the important character development and introduction that took place in the initial series, making Moyashimon Returns best-suited to those who.... lived in Japan, let's say... when the original show aired.

For those who have seen that first season, Moyashimon Returns quickly feels like the welcome return of some old friends - despite their oddities and eccentricities, none of the characters dominate the show's screen time too much, giving time instead for the relationships between them to take centre stage as they work together or bounce off one another.  There are some dramatic elements to the series at this point, with researcher Haruka trying to fend off her well to-do father's intention of pushing her into an arranged marriage, while Sawaki's refusal to tell Oikawa about his microbe-related talent when everyone else knows about it remains as a constant source of stress for him as it develops towards what should be a pivotal moment in episode four.

If that all sounds pretty ordinary (the whole microbe thing aside), Moyashimon Returns does have one hidden jewel in its crown - its educational content.  Now admittedly, I've never sat bolt upright in the middle of the night and thought "I really need to know how they make miso", but regardless of this Moyashimon uses its setting and Sawaki's vision as a prompt to delve into the world of fermentation and the like, explaining at a relatively high level the production processes of sake and miso amongst other things, how these products were discovered and traditionally made and so on.  The show even dabbles a little in politics, musing on why a lot of sake is limited to a certain percentage of alcohol content or discussing biofuels, for example.  This might not be everyone's cup of tea (or sake, rather), but I can't help but find it utterly fascinating week on week - it's always a nice feeling to come away from a TV show having learned something new, and Moyashimon provides that on a regular basis without fail.

One thing existing fans of the series might notice is that the show's animation style has changed slightly since the first season, in keeping with the "softer" aesthetic of a lot of modern series while still keeping all of its characters very much recognisable - it might frustrate the purists, but to my mind the overall look of the show is a necessary upgrade to move with the times, while the often CG-produced microbes themselves are as adorable as ever.  Has bacteria ever looked so cute?  Unfortunately, the answer is possibly "yes" when it comes to watching Crunchyroll's streams, which at the time of writing are only available in 480P resolution - hugely disappointing at a time when we've become used to seeing 1080P streams of all the latest shows.

At the end of the day, my final rating of Moyashimon Returns thus far is very much aimed at those who have watched and enjoyed the first season of the show - rejoining its cast of characters is a real joy as they mix hard work with larking about, with the series doing a good job of capturing its university spirit in the way its students behave.  However, without that familiarity with those characters and their situations, you'll probably be left lost and bored by what's going on most of the time, with only the educational segments available to possibly hold your interest in what it has to say.  If you've never watched Moyashimon before, I'd suggest lopping at least a couple of points from the score below, as it's a huge ask for you to invest in characters that you haven't followed up to the point where this series begins.

Japanese audio with English subtitles.  Video is available in 360p and 480p resolutions; removal of advertisements available to paid subscribers.

8
A fun, entertaining and educational show that is aimed squarely at viewers of the original series. If you've never seen Moyashimon before, it would be really tough to recommend sitting down to watch this second season.
LATEST REVIEWS