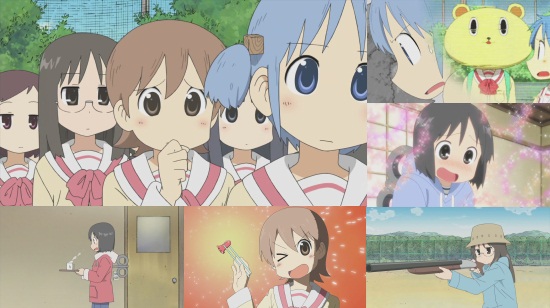 Distributor
Crunchyroll
Certificate
N/A
Price
N/A
Date
19 Apr 2011
I think its safe to say that the concept of "schoolgirls doing silly/wacky/zany things" as a basis for a comedic anime series is well and truly established, what with your Azumangas and your Lucky Stars and your Pani Poni Dashes. With so much material of varying quality already out there, what can Nichijou possibly bring to the table that is fresh and exciting? Well, there is a guy with a sick afro, another guy who rides a goat to school, and an overly-anxious robot girl whose body is used to store cake. Sounds pretty good so far, doesn't it?

The nominal main characters of Nichijou are a trio of girls - the dumbass (Mio), the dumbass with energy (Yuuko), and the silent emotionless girl with glasses and a thousand yard stare (Mai). There are also plenty of other characters - the aformentioned posh goat-riding dude, members of the school faculty plus my personal favorites, the nervous robot and her ten-year old genius creator. All are well-established individuals with interesting facets to their different personalities, and without anything too outlandish or stupid to steal the spotlight from everyone else.

It isn't a bad combination of actors to springboard comedy off of, but the main problem (at least so far) in Nichijou is that all of these groups are kept strictly separate and whenever the scene shifts you have to re-adjust to a completely different suite of characters. It also makes all of the sketches feel like isolated incidents rather than a cohesive series of events, something that dampens the overall effect of the humour, at least for me. Azumanga was great at making all of its daft events feel weighty as the cast all knew each other; a self-contained setting for the characters rather than the multiple fragmented worlds that exist within Nichijou.

While I will be the first to admit that humour is immensely subjective, I didn't find Nichijou very funny overall. While it does have some damn amusing sequences and great short jokes, the poor pacing of the longer sketches tends to leave them floundering. Quite often I would find myself glazing over while watching, either waiting for a joke to start paying off on its build-up or waiting for the scene to change as a scene had continued to play out long after I had lost interest in the events on screen. It felt like a lot of bloat had been introduced into the show in the process of translating the original manga into animated form, and while this does not damn the show it means you spend a lot of time zoning out and letting your mind wander instead of getting "into" whats happening like you do with a good comedy series. Its a genuine shame as when the show hits its stride it had me barking out laughs like a loon, but at all other times It felt like I was stuck waiting for something to happen.

The main reason I didn't wander away from Nichijou during its slower moments and put a cup of tea on is because it looks bloody lovely. The show uses a muted colour palette which makes it very pleasant to look at and generally easier on the eyes, especially when you are watching the show on an iPad situated mere inches from your face as I did. The animation is wonderfully smooth, as you might expect from Kyoto Animation, and looks the product of a great deal of love, care and attention. This is especially apparent in some of the extended gags when the animation kicks into high gear.

Nichijou is enjoyable, but left no impact on me. It made me laugh, but I feel like I spent the majority of its episodes waiting for something to actually happen. A solid "meh" show - not bad by any stretch, but not great either. Would I continue to watch it for the rest of the season? Probably not, but I might be tempted to watch an episode at the tail end of the series to see if it develops over the course of the season. If someone could cut out all of the "Skipping Rope" and "Rock Paper Scissors" ten second gags that are in every episode and stitch those together than I would certainly watch that in a heartbeat, as those moments are solid gold.
You can currently watch My Ordinary Life (aka Nichijou) in streaming form right here at UK Anime Network - the series is also now available via Anime on Demand.

6
Not exactly comedy gold, but a very pretty attempt at it that occasionally succeeds.
COMMENT AND DISCUSS
blog comments powered by Disqus