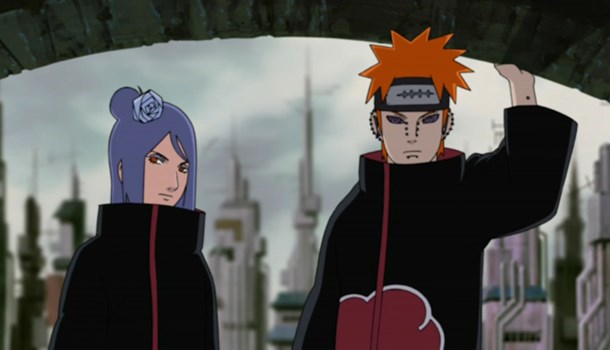 Naruto and Iruka continue their battle with the escaped convict Mizuki and his two minions Fujin and Raijin as they try to stop him from obtaining the ultimate power.

I’m afraid it is true - The filler has come and so far it has been very uninspiring stuff. No matter what happens between now and the end of this Naruto saga will make little impact on Naruto Shippuden. So basically we are just riding the wave until we finally wash up onto new shores and have somewhere new to explore.

With that in mind, it wouldn’t be so bad if the episodes in this volume were entertaining... but they’re not. What we seem to get is a collection of about four or five episodes which feature a number of some of the Naruto cast as they help Naruto in some form or another to find out about Sasuke or just generally beat some people up. It is very formulaic and we all know that nothing will be discovered or found because it simply can’t happen yet.

Formulaic has really become the buzzword for Naruto nowadays - Everything is predictable not just in terms of the story, but also in animation and design. What should be improving over the years seems only to be getting worse with each passing season. While fans will argue that it is the same old Naruto, that is where my problem lies. It is the same old Naruto; recycling old plot devices, characters, and even animation I swear in some places. It all becomes very demoralising after a while and seems to damage the series more than actually succeeding in holding interest until the new series.

For Naruto collectors, buying the remaining episodes will no doubt be required to finish off the series. For the rest of us, it may be wise to hang off on Naruto for the time being and wait for Shippuden to make its arrival in 2010.

Just dual-languages as standard and some Manga trailers. The extras seem to be going the same way as the series.