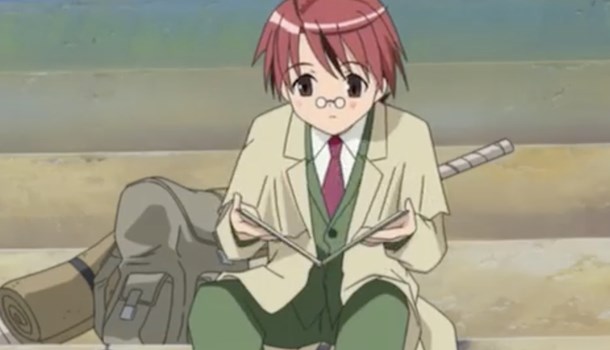 Negima is the story of a 10 year old Welsh wizard named Negi Springfield, who becomes a teacher at Mahora Academy, an all-girl school with a campus so large it could be a city! Our young mage must train to become a better wizard, impart knowledge to his class and survive the highly charged sexual atmosphere ^^

Firstly, I'm a major fan of the manga. Sure, it's questionable soft-porn harem insanity, but it has a great storyline (unlike Love Hina) and a great cast. So how does the anime fare?

Well, it certainly captures the cuteness. All the characters translate brilliantly to screen, from little red-haired Negi to each and every one of his cute class.

Negi searches for traces of his legendary father, and the staff at Mahora Acadamy know more than you might suspect. As the mystery deepens, Negi begins to take on members of his class as assistants, each bestowed with a magical item. Every pact must be sealed by a kiss, and is usually instigated by Negi's familiar, Chamo-kun, a former wizard turned ermine for past indiscretions.

Music is a little on the twee side, and whilst the storyline deviates from the manga in places, it's more or less faithful to the original concept.

The English dub is acceptable, but with so many female characters it's sometimes hard to distinguish the voices, and this makes things more muddled than they should be. It's a forgivable flaw though, and doesn't affect the show too much. What is odd is Negi's accent. It isn't Welsh. Even a soft twang might have made the character a little more unique, but he just sounds like a squeaky girl with a very posh accent - stick to the sub for this one.

You see, the Japanese clearly weren't happy with the Negima anime, and decided to do it again, with the dark undertone and more complex arc intact. Negima?! is by far the superior series, but sadly we have the original effort here, and we can only hope for healthy sales so that we might see this alternative version some day.

In the meantime, Negi fans will doubtless get their fix from this initial series. It's fairly fluffy stuff, with the odd panty shot and some exciting magical battles perferating the cute stuff evey now and then. But it won't be rocking your world any time soon.

6
Harmless enough, but lacks the character of the manga version. Still, a fun diversion.