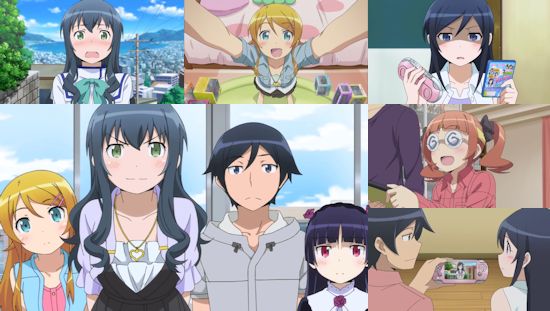 In this era of streaming anime becoming ever-more prolific we find ourselves running more and more frequently into a scenario where, officially speaking, a first season of a series isn't available in the UK while subsequent seasons are. Although this isn't quite the case with Oreimo - the first series is now available on Crackle - we're still left with a similar dilemma, as some of the vitally important episodes which lead in to this second season are only available via Aniplex's over-priced DVD and Blu-Ray releases of the series.

If you haven't watched those "True Route" episodes of the first series of Oreimo, you'll certainly feel a little lost - why is Kirino back in Japan? What's up with Kyousuke and Kuroneko's relationship? You'll probably be back up to speed by the end of the first episode, but there's still a decidedly high possibility that you'll find it jarring unless you're well-versed in what has gone before.

That possible confusion aside, this second series of Oreimo returns us to the lives of siblings Kyousuke and Kirino, as their love-hate relationship continues in lieu of the latter leaning on the former to help her out when it comes to her secret (or rather, semi-secret by this juncture) otaku proclivities.

Perhaps because of its need to reintroduce its scenario, the first episode of this second season works towards giving at least some screen time to all of its characters in a way that you could imagine would be accompanied by cheers were this a sitcom being recorded before a live audience. It's largely a bland but effective way of getting back into the swing of things, while teasing only very brief moments of the kind of comedy magic that the first season held.

Unfortunately, from here the whole thing goes off the rails somewhat. Episode two inexplicably decides to mine one of the franchise's drama CDs for material, which proves to be a huge misstep - drama CDs tend to be the place for overblown and out-of-character shenanigans to occur, freed from the normal sense of restraint a lot of series have, and as a result we're left with a surreal story that goes entirely against Kyousuke's character in particular, thus destroying a lot of the hard work the show has done to build up that character to this point. This is then followed with an episode revealing the back story of Kirino and Kyousuke's mutual friend Saori, explaining how she came to be an otaku - this is certainly better material relatively speaking, but a far cry from the sense of fun and comedy produced by much of the first series.

Beyond the disappointment of the actual content of these early episodes, everything else about the series is satisfyingly familiar to existing fans - despite the change in studio from AIC to A-1 Pictures, most of the show's production staff remain the same, and aside from an obvious sprucing up of animation quality for this second season the series still looks good and suitably colourful, while the voice acting cast still seem to be having a ball even without any quality story-telling to back it up.

In the assumption once again that you are an existing fan of Oreimo, chances are you'll want to persevere with this second season in the hope that it ultimately recaptures the sparkle that made its first series so much fun - be warned though, these opening gambits are tough going along those lines, bereft of most of what made Oreimo so enjoyable as a kind of "Genshiken for a new generation".

You can currently watch Oreimo Season 2 in streaming form via Crunchyroll.

5
Oreimo is back, but missing much of its comedy and charm in these early episodes. At least it can only get better from here, surely...
COMMENT AND DISCUSS
blog comments powered by Disqus