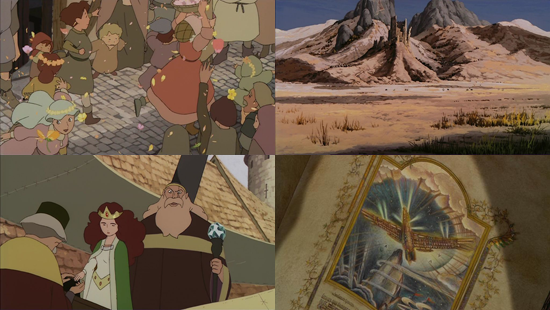 I was initially intrigued by Princess Arete because, at first glance, not only did it appear unfashionable - in this cynical and postmodern age we can still be treated with an honest-to-goodness fairy tale? - it seemed outright uncommercial. It's not a recent film - it was originally released in back in 2001 - and while it won an award (at the 2002 Tokyo International Anime Fair) an industry gong doesn't bring Joe Public to the table, and it made little impact domestically. This physical release isn't even the first time we've seen the movie in the West - it ran on Netflix throughout 2015, but was taken off the catalogue again exactly one year later - that this fact seems to have passed almost without comment suggests it wasn't exactly a roaring success. Safe to say then that Princess Arete is not a hot new property fresh off the hype train, so what was the hidden quality that has made Anime Limited pick it up now? The appeal of Princess Arete can be better understood as a project of Sunao Katabuchi, director of In This Corner of the World, a film which had a recent successful run in UK cinemas and caught the attention of the mainstream press. Perhaps there's a hope that lightning will strike twice? It's also a movie with good optics - ever since Studio Ghibli was mothballed anime studios have been searching high and low for “the next Miyazaki” like the treasure at the end of one such fairytale quest, and in featuring a precocious and independent young heroine in a gentle fantasy land, Princess Arete would seem to tick all the Miyazaki boxes. Still, this is a small indie flick, not a Disney-powered juggernaut, so hopes that it will be a Spirited Away-level sensation are slim. It seems like a festival movie, but festivals are meant to be fun, so is Princess Arete something to celebrate?

Princess Arete is the princess in the tower - cooped up in the castle by her father the King. He is supposedly seeking out a husband for her daughter, but seems in no hurry to pick one - cynically stringing along questing suitors to bring him evermore tribute of magical artefacts in the vain hope he'll consent to giving one her hand. Princess Arete has no desire to wait to be wed, though - looking wistfully out of the windows to the people living happy and carefree outside of the castle, and to the vibrant forests and rivers quite unlike the cold grey stone of the castle walls, she longs to escape her gilded cage and join them in a life of adventure. You have to be careful what you wish for though because adventure may find her when she's least prepared for it. Unbeknownst to Princess Arete there's a dark prophecy that hangs over her head and those castle walls may have been protecting her from a wicked wizard who is seeking it.

It may seem counterintuitive at first but Princess Arete is very striking and distinctive precisely for appearing quite plain. When you see  'European fantasy' in the context of manga and anime you're usually seeing it through the Breath of Fire videogame RPG lens, but rather than giant shoulderpads and swords that look more like an Etch-a-Sketch doodle than a weapon, the design of Princess Arete is rather more subdued. Vaulted halls are half-lit by smoky torches and windows are small panes of bottle-glass - everything from architecture to dress looks more authentically, actually,  mediaeval and it is very engaging and interesting to explore. Even the musical interludes feature lutes and lyres over grand modern orchestras (it's funny to think that the song that plays in parts of the movie was written by Origa when she'd later go on to sing the themes for sci-fi cyberpunk Ghost in the Shell: Stand Alone Complex). The art provides plenty to explore as well with highly detailed backgrounds, from the deep lined grain of old gnarled wood to the cuts of each block in a dry stone wall to texture of vellum in gorgeous illuminated manuscripts and the deep flawless sparkle of a gemstone. You might even accuse it of being somewhat misleading... the suggestion of airy wispy whimsy in the pencil-sketch box art isn't actually matched by the concentration of the highly detailed art of the movie itself and Arete looks almost nothing like she does on the cover either (even to the extent of giving her red hair to push the Miyazaki allusions and make her look more like Princess Nausicaa when Arete's own hair is actually very brown), which is really a bit cheeky!

There are some neat visual cues to be found in the art as well - when Princess Arete is trapped in the wizard's dungeon, the tall chamber is painted with a starry sky to convey the illusion of a happy home but the paint peters out back to bare stone towards the roof. There are also a couple of impressive panning and zooming shots which showed off the technical craft of pre-digital animation itself as the 'camera' swings around outside the towers of Arete's and the wizard's castles - while not quite as complex it was still reminiscent of the sweeping vistas of the gun batteries in the "Cannon Fodder" segment of the classic 1995 anime anthology Memories which like Princess Arete was also a Studio 4 °C production. While actual characters are a lot plainer and flatter than the backgrounds that's an inevitability of animation and not something I hold against Princess Arete.

The art is nice then, but what does it show? Wikipedia describes Princess Arete as a "feminist" film but while it has the theme of a girl not being constrained by societal expectations and making her own way in life, that was also a hangup of the character Jailbreak in The Emoji Movie- where Patrick Stewart is a turd - so it's maybe not quite so radical as it thinks! While Arete casting off her princess-hood to find her own way is part of the film, it also has a second, more universal theme of not being shackled to the past - the wizard lives in the dregs and detritus of past glories and even he admits that he's bored with the endless monotony of his meagre dominion... the only problem being that in watching him become bored so do we as well.

It's hard to absorb the message of Princess Arete when it takes such a tremendously long time in telling it. Other reviewers have criticised the movie for its slow pace, and to be quite honest I find it hard to disagree with them. Everything in this film takes a laborious age to do, from opening a window to locking a door. Could something so absolutely leaden and plodding really be the work of Sunao Katabuchi, who directed the explosive action extravaganza Black Lagoon? This criticism isn't because I'm a sugar-addled impatient tween, either, but because in many cases the deliberate care of the direction actively works against a scene. For instance, in one section a couple of Princess Arete's suitors simultaneously strike on the same idea of climbing up to her tower - to try and woo her by showing how dedicated they are - only for Arete to show up all their stories as fake, thanks to being well read. This should have been a lively comedy scene with a gaggle of princes and knights getting tangled around each other's climbing ropes and squabbling between themselves over who gets to spin the same textbook tales before an exasperated princess shows her steel by sending them all tumbling down like Humpty Dumpty. It would have been an energetic demonstration of the suitors' selfishness (arguing with each other rather than talking to Arete, as they only care for marriage because it lets them inherit the kingdom) and would let you cheer along Arete's assertive spirit. Instead this scene drags on for far too long and hammers the point down to nothing: one suitor even gives up himself after long minutes of testy browbeating to take his own leave, and while Arete shuts the window on a second she does it in such a sullen and downcast way it feels like an altogether miserable and entirely uninspiring close to the chapter.

This glum, po-faced attitude permeates Princess Arete. There are only very occasional musical interludes and whole acts pass by in stern silence. While I generally support the more historical art style of the movie, there is one instance when it runs counter to the theme: when the wizard enchants Arete to subdue her rebellious spirit and make her a more pliant princess, it's hard to even recognise the transformation because she looks virtually identical to the way she did before. This actually turns out to be one place where some My Little Pony-esque pink candy sparkles wouldn't have gone amiss.

Princess Arete is presented as a children's movie meant to inspire young girls but it has more obstacles to achieving this than just the slow pace making kids fidgety. The lack of an English language option limits its audience considerably, as I doubt younger relatives will want to sit down to the TV to be told they're expected to read. Also, while it may be a small niggle, there are some errors in the subtitles too (for instance "everyone has the 'some' magic inside of them" - maybe the typesetter's attention was wandering). There is also some brief child nudity towards the end, and while I must stress that it's of an entirely innocent and non-sexualised nature (a baby is playing in the sea with his mother) parents may be understandably wary.

There was one little twist that I liked in the dialogue - when Princess Arete breaks free of the wizard's spell, it's because of the flaw in the enchantment that he didn't recognise - he wanted to make Arete someone as insignificant as he was, but that still left the potential for escape as everyone has a seed of greatness in themselves, even the baddie. That this wasn't spelled out but still clear to infer shows that there was indeed a specific vision this movie was built to express and that shows admirable intent, but preoccupation with saying the message comes at the expense of telling the story. Princess Arete is definitely not "the next Miyazaki" - Miyazaki's children's movies always had a gamboling playfulness to them but Sunao Katabuchi seems to have been altogether far too self-conscious about how Important a story he was telling and how Worthy its message was and that coddling care has resulted in a slow shuffle of a movie.

Alas, at the end of the day my experience of Princess Arete was not quite a fairytale romance. It's an artistic throwback to the era of animation before digital techniques took over (you can even see the texture of the paint in the post-credits sequence) but while pretty to look at in places it's ponderous to watch.

5
A fairy-tale with clipped wings.