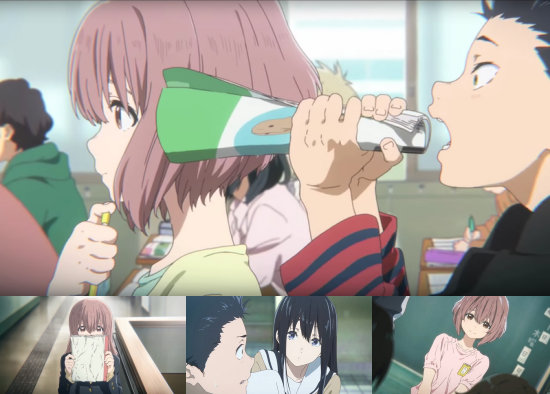 Bullying is something that we've likely all been exposed to at some point during our childhoods, whether it's directly as someone who has suffered from bullying or perhaps even been a bully themselves, or indirectly as someone who has been in a class where another has been bullied. As a result, we all know how the mechanisms that lead to, enable and escalate bullying, and the effects it can have on all involved. This makes the prospect of discussing bullying an emotive and difficult subject, and it's just one of the tricky propositions that A Silent Voice covers. Having enjoyed no shortage of critical success in its original manga form, the series has now been adapted into a movie courtesy of Kyoto Animation, directed by K-ON and Tamako Market's Naoko Yamada.

After an opening montage set to The Who's My Generation (something of a lazy way to introduce any tale of teenage life, it must be said), we delve straight into uncomfortable territory as we watch a young man setting his life straight in preparation for a final journey - a suicidal one. However, his plan is circumvented as one element of his life he seeks to straighten out gives him pause for thought. It's this which allows us to see how this boy has reached such a dire decision - Shoya Ishida was a loud but likeable kid until a deaf girl named Shoko Nishimiya joined his class, and as she hogged the limelight in his eyes on account of her particular needs he became the vanguard of a group who came to bully Nishimiya. When these escalating events reached an uncomfortable head, the tables were turned as the bully became the bullied - a role he willing accepted from his perceived need to atone for his sins and reap what he had previously sown. Now isolated and friendless while still wracked by guilt for what he did to Nishimiya, the boy who was the centre of attention is now pushed to the margins, seemingly leaving him with nothing to live for.

It's the awkward reunion of Ishida and Nishimiya which has given the former his first glimpse of possible redemption, leaving him to want to spend more time with the girl at whom he once held contempt. As his circle of friends begins to grow and his relationship with Nishimiya improves, Ishida is still unsure of whether he has the right to be happy, and it's a question that reaches far beyond his own personal state of mind as others who were involved on both sides of the bullying of years gone by have to come to terms with the impact of their actions upon themselves and others.

All of this means that the early going of A Silent Voice is deeply uncomfortable - after that bright and breezy rock-fuelled start, we're soon mired deep in a world of suicide and bullying which escalates to a horrible degree. This also gives us an early glimpse of how masterfully A Silent Voice handles its topics and content - the starting point and escalation of the bullying aimed at Nishimiya is terrible yet still allows you to see exactly where these actions are borne from, making plain that Ishida isn't an irredeemable person and actually allowing you to root for him in his quest to put things right.

As Ishida's life improves and his bonds with others begin to grow, so the film has an opportunity to spread its wings, providing some great comedy and introducing some strong characters, although admittedly many of them never get quite the focus that they do perhaps deserve. This is undoubtedly an area where Yamada is in her element as a director, seamlessly blending comic asides and everyday fun with the underlying worries and tensions that remain bubbling under the surface throughout. The assured touch on show here ensures that the film never gets mired too deep in its darker subject, and there's always just the right amount of levity to stop things getting too heavy while this fare also helps to build a bond between characters and viewer.

Of course, the darker tone is never far away, and the struggles of the cast eventually return to the surface to take the film through to an intense final act where years of built-up worries and self-doubt overflow into a whirlpool of hurt and bad decisions that pulls the viewer in alongside it in an incredibly intense way. A Silent Voice may not be the kind of film that leaves you in a flood of tears, but its emotional impact is high and deeply affecting before it reaches a conclusion that leaves you satisfying without overly dulling the sharp of edge of all you've seen unfold.

It's really quite spectacular how well A Silent Voice manages to execute on everything that it tries to present - its ability to present every character in a way you can relate to or at least understand is a testament to how subtly it manages to present the feelings and thoughts of the cast without relying on lots of inner monologues, instead using facial expressions and body language to capture those emotions perfectly. This is particularly important considering Nishimiya's deafness - characters communicate with one another via sign language on occasion, with the viewer left out of the conversation at times but still able to grasp the feelings at play without a single spoken word. The film also uses some very simple but effective visual tricks to relay Ishida's view of the world - as he finds himself isolated so he starts to look at the floor rather than the faces in front of him, and we see this in the form of crosses over the faces of those he's avoided making eye contact with which peel away as he opens up to them. In other hands this kind of obvious device would feel clumsy or even obnoxious here, but on this occasion it works well.

Visually, it goes without saying that this is a great-looking film that is soaked in Kyoto Animation's trademark style - you could argue that some of its characters look a little too soft and cutesy when something a little closer to reality may work better, but sticking with this visual treatment undoubtedly helps in delivering the body language required of the film that we just mentioned. Given that we know what this studio can do from a pure animation quality standpoint, it's the direction that really elevates the film, giving it a laser focus on whatever each scene looks to convey and pulling it off with aplomb.

The rest of the film's treatment is equally notable - Saori Hayami's voice acting performance as Nishimiya is absolutely astonishing and deserves to be praised from the rooftops, while the rest of the cast also put in some good work. Musically, the film is a masterclass in how to use incidental music - not only does it accentuate important or pivotal moments, it's also smartly crafted enough to actually dial back the intensity of scenes which deal with the film's most difficult subjects, making unbearable moments just bearable enough thanks to the reassuring motifs sat comfortingly in the background. It may not have the most ear-popping soundtrack in isolation, but there are few better examples of how to best use a soundtrack within the confines of a film itself.

If there's one complaint to level at A Silent Voice, it's that it simply doesn't have time to properly follow through on some of the plot points and characters it introduces. Much of the extended cast feels a little flat when there are clearly deeper stories that could be told about them, which would in turn further elevate the main story, and similarly there are some points where that main plot needs to rush forward without having time to join all of the dots. This latter issue is most glaring in the film's second act, where a big pivot in relationships between members of the cast comes almost out of nowhere, as if someone pushed the "generate drama" button rather than engaging in a slow but noticeable cracking in these relationships over a period of time. The way these elements of the film are handled make sense for a two-hour film - it really couldn't afford to run any longer than it does - but it does lead to a few moments where it feels like a certain something is missing.

None of this really detracts from how incredible A Silent Voice is however - its lightness of touch and assured handling of such difficult subjects makes for a film that is intense yet still entertaining, giving you plenty to think about but never in deference to acknowledging that you're here to be served up something enjoyable. It's a struggle that other films have failed at - Keiichi Hara's Colorful springs to mind - but here it all seems so effortless that it's quite astounding.

A Silent Voice is a truly impressive journey - in turns harrowing, beautiful, depressing and uplifting, but always highly engaging and filled with life. You'll be hard-pressed to find many better treatments of the difficult subject matter at the heart of this film, particularly within the realms of anime, and for this reason you should absolutely do what you can to watch this terrific effort.

9
An intense but strangely beautiful film, A Silent Voice is an incredible journey into some decidedly difficult subjects.
COMMENT AND DISCUSS
blog comments powered by Disqus