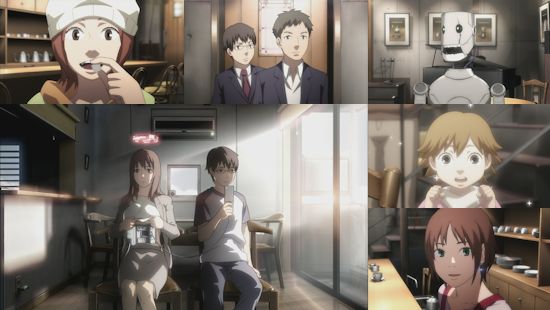 Despite their frequent use at the core of science fiction story-telling, the 21st century is still yet to being us a world where we live alongside androids - I can only imagine they're stuck on the same manufacturing conveyor belt as all the flying cars.  However, unlike flying cars the concept of integrating androids into society offers up a plethora of interesting questions - not just about the behaviour of the androids themselves, but also what defines us as human beings.  It's this kind of heady line of questioning which drives Yasuhiro Yoshiura's Time of Eve, a six-part OVA series which originally enjoyed exposure to western audiences via Crunchyroll before making its way to us at the tail-end of 2012 on Blu-Ray.

Set in the near future, and "probably in Japan" as the introduction helpfully points out, the world of Time of Eve is one where androids have become an indespensable part of daily life, carrying out chores and taking away the strain of cooking, cleaning and shopping amongst other things.  But have androids encroached too far into human society, and come to resemble their masters too closely?  Some parties clearly think so, and the news is rife with stories of people falling in love with their android servants, and advertisements questioning whether you'd want to eat food grown by a robot in much the same way that we currently query whether genetically modified food is acceptable.

It's in the midst of this on-going national debate that we stumble upon the show's titular cafe - an establishment with a single rule, in that there should be no discrimination between humans and robots within its walls.  With this rule allowing for any androids to turn off the normally striking ring of light above their head that marks them out as such, the lines begin to blur between man (or indeed woman) and machine.  Who is human and who is mechanical?  It's a question that nags at the two high school students - Rikuo and Masaki - as they're introduced to the cafe and its regulars, and it's through their eyes that we see various stories surrounding both the regulars of the establishment and our pair of main characters themselves.

The result of this is six stories which are self-contained to some degree, while also containing some deeper threads that run throughout the series and largely manifest itself through the history of Rikuo and his relationship with family android Sammy, and Masaki and his own unique family situation.  With most of the episodes which make up this OVA clocking in at around fifteen minutes (only the final episode luxuriates in a longer running time to flesh out its story), it's really quite incredible just how much thought-provoking material is crammed into each episode, and perhaps even more incredible how much of that material is also superbly entertaining.

Although it inevitably leans upon Asimov's Three Laws of Robotics and wastes no time in quoting it early on, don't be fooled into thinking that Time of Eve is going to be a dull or cliched tale of robots - this is a series with a lot to say, and in many cases the real focus of its talking points are on humans just as much as their android companions.  Thus, as the episodes go by you find yourself considering the roots and origins of discrimination and how easy it is to legitimise it simply by picking out those who are different to you, the nature of creativity and whether it's something that can truly be understood or be borne from a non-organic being, and a whole lot more.

If all of these talking points were spouted out at you like some kind of lecture or in a way that felt like the series was preaching to you it would be no fun at all, but thankfully Time of Eve is not only even-handed in its delivery of the topics at-hand, but also great at weaving these topics into an entertaining narrative.  Nowhere is this better exemplified than in episode four, "Nameless" - an effort that is quite possibly one of the funniest things I've ever watched (animated or otherwise), but with a wicked twist in the tale that will leave you in tears unless you're... well, an android.  Although this is the clear highlight, every episode has an unerring ability to frame its emotional state perfect, and it never fails to hit the mark whether it's trying to make you laugh or cry.  Quite frankly, I can't think of any other anime series that delivers its emotional payload quite as perfectly as this one.

In terms of the OVA's Blu-Ray treatment, but simply it looks great - although the content of the show isn't the kind of visual tour de force that makes a good Blu-Ray transfer essential, everything still looks clean, crisp and clear.  The most jarring aspect of the series remains its tendency to switch to a first-person perspective which appears to be animated at half the regular framerate - it's an effect that you get used to, but it still looks and feels "off" and it's pretty much the only black mark I can put against the OVA as a whole.  In wider terms, this physical release is clearly just the Japanese release of the OVA with the addition of English subtitles, meaning that the main menu is still all in Japanese and there's no translation of the audio commentary provided.  One nice addition to the physical package is the inclusion of a complete set of insert sleeves for the Blu-Ray case, featuring virtually all of the main characters for you to take your pick from - not the most important extra in the world admittedly, but a satisfying bonus for completests out there.

If you've ever found yourself bemoaning the lack of intelligent story-telling or "hard" science fiction in the anime sphere in recent years, then you really, really need to pick up Time of Eve - it's an absolute triumph at everything that it does and long after you've been swept along by the tales contained within it you'll find yourself laying awake at night pondering some of the questions that it asks you both you personally and modern society as a whole.  When was the last time you could say that about an anime series?

Time of Eve is available to order on Blu-Ray from the official web site.

Japanese audio with English subtitles.  Extras include a series of reversible sleeves for the disc case, and a Japanese-only audio commentary.

10
Intelligently thought-provoking and incredibly entertaining, Time of Eve pulls off everything that it tries its hand at with unerring ease.
COMMENT AND DISCUSS
blog comments powered by Disqus