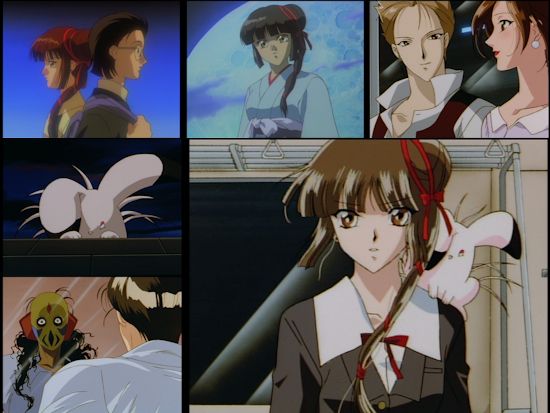 Poor old humankind; we really can't catch a break, can we? Here we are, trying to mind our own business, when we find ourselves constantly assuaged by demon attacks and the threat of the supernatural. At least, that's how the worldview of Vampire Princess Miyu sees humanity through its lens. The core of the issue as imagined by this series are Shinma, troublesome spirits that have broken the rules governing them to make their way to the human realm to take over a suitably vulnerable host, making full use of their body as they lead said host to ruin.

There are protectors of humanity from these nefarious beings however - so-called "Guardians" tasked with despatching the Shinma. This brings us to the titular Miyu, a quiet and elegant Guardian who oversees Japan and seeks to keep it safe from Shinma with the assistant of her masked comrade Larva and a weird little critter named Shiina.

That isn't to say that this task of protecting humanity should be taken as compassion towards humans - Miyu's job is simply that, and her job description doesn't include anything about feeling sorry for those possessed by the Shinma, or indeed anyone caught up in the fallout of their activities. The closest our vampiric Shinma slayer comes to any semblance of compassion is her ability to offer distraught humans an opportunity to dream eternally in a trance-like state, trapped in the idealistic utopia of their own mind. It's a bit like spending an afternoon watching cat videos on YouTube, only for the rest of time, I imagine.

Anyhow, with all of that setup out of the way (and the series itself explains all of this during the opening title sequence rather than within episodes themselves, so don't skip it!) what we're left with is almost exclusively a "monster of the week" affair - something strange happens in Miyu's general vicinity, investigations reveal it to be the work of a Shinma, Miyu pits herself against said supernatural being and wins in two seconds flat, rinse, repeat, drink some more coffee to desperately try to stay away during this snooze-fest.

There's really no nice way of saying it - Vampire Princess Miyu is incredibly boring. The episodic format of the series means that we're never granted enough time to get to know or care about the characters who appear for each one-off story, making it hard to feel any emotion towards their circumstances - given that this is where the show's only real hook is located for the most part (the show's action quotient is super-low budget and fleetingly brief more often than not), it fails miserably to generate anything much of interest.

This is actually rather a shame as there's clear potential within some of the show's stories, whether it's a crazy cat lady taken to extremes or a person that I can only describe as a "Gok Wan monster", while there are also some real possibilities inherent in Miyu's own personality as she tried to blend into humankind by (of course) becoming a high school girl and making some genuine friends. Unfortunately, Miyu's character - and that of the other regular cast members - isn't mined anywhere near as much as it could be, adding further to the list of wasted opportunities presented by the series.

Not helping the series in terms of engaging the audience is its dub - the English dub of the show is horrendous in its flat and occasionally hilariously bad delivery, with the entire cast sounding as bored as the viewer. Even the Japanese language track isn't all that great, although it is at least an improvement. Visually, the show also suffers by looking rather dated - it isn't bad per se, but it struggles to stand up against a lot of modern series and more broadly feels like a low-budget production a lot of the time.  Only the show's soundtrack is a saving grace here, with some superbly moody pieces fitting in snugly throughout.

We should probably also note that the first DVD in this collection merges its three episodes into a single entity bookended by opening and ending credits - this was a decision taken by Tokyopop for their original US release of the series which remains intact here as (and I quote) "a piece of history". It isn't disruptive in the grand scheme of things, although the stitching together of disparate episodes does feel odd so it's a relief to see a return to normality for the remaining discs on this collection.

So, is there any reason to pick up Vampire Princess Miyu? Not really - it's a weak series that takes itself too seriously (I'm pretty sure I wasn't supposed to laugh at a monster named Han-ki...), and it's tough to really find any redeeming features other than the odd episode here with an interesting premise, and a finale which offers some ludicrous but oddly entertaining twists. Unless you're someone who really loved this series the last time it rolled around in the UK and still need to pick it up on DVD, or you're simply looking for a cure for insomnia, then you're best served steering well clear of this one.

3
Supernatural shenanigans have never been so repetitive and dull - avoid.
COMMENT AND DISCUSS
blog comments powered by Disqus