Welcome to THE SPACE SHOW (Theatrical) 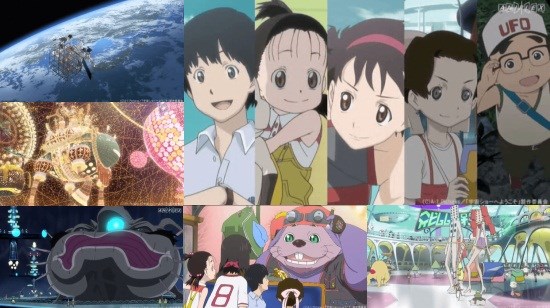 Welcome to THE SPACE SHOW (Theatrical)

Director of Read or Die, Koji Masunari, gives his feature-length debut in the form of an imaginative family film that takes a group of young children on an unforgettable adventure through space. This is also the first movie to come from the relatively new animation studio A-1 Pictures. As a subsidiary of Aniplex, this studio has been involved in animation productions from Fullmetal Alchemist to So-Ra-No-Wo-To.  Given these credentials, how does this first from our young studio hold up and will we be looking forward to more in the near future?

Welcome to THE SPACE SHOW starts off in a remote little Japanese village, quiet and full of a serene natural beauty. It’s summer break so the village children are free to make their own fun together without the watchful eyes of adults looking over them. They play baseball, hang out, two siblings fall out over a lost pet - So far so normal. Things change when they discover a tiny injured dog and nurse it back to health only to discover he can talk. The pooch is actually a space alien called Pochi, a renowned professor from Planet-One (or “Woof” in Japanese). As a token of gratitude, he offers to take the group into space with him and plays the part of teacher in a school trip that is completely out of this world. There, they partake in interstellar tourism, part-time jobs, galaxy train rides and become involved with pirate television station THE SPACE SHOW.

Along the way the characters manage to grow, individually learning important lessons and strengthening bonds together. Themes include independence, friendship and the importance of wasabi. These ideas are seeded early on in the story and you really take notice of them as they bloom later on as the plot thickens and the tension builds up. There is action right from the beginning with short set-pieces turning to bigger sequences later on until we get a huge climactic finale and its subsequent mellow epilogue.

A-1 Pictures delivers animation of a quality worthy of a high budget feature film throughout in a variety of different flavours. The painted vistas of the humble Japanese village, its forest and tiny school house offer a kind of beauty before you’re transported to the worlds beyond our solar system and treated to busy cityscapes and kaleidoscopic colours. The characters move smoothly and with personality; their body-language speaking pages of dialogue without needing to speak a word. At the same time, we also get fantastic visual feasts in the lively alien world and great action scenes. Imaginative designs, references and lots of cool stuff happening is a big plus.

One minor criticism for this film might be its long runtime given the family target audience. By the end of the movie the children are exhausted by their big day out, ready to tuck in to bed and no doubt the children watching this will feel the same... but what a great day it was.

Welcome to THE SPACE SHOW was screened as part of the BFI Anime Weekend.  You can currently view the first twenty-two minutes of the film via the Aniplex US YouTube channel.

Also, check out a Q&A session with the film's director Koiji Masanori and producer Tomonori Ochikoshi in our own article right here!

8
A wildly imaginative chidren's adventure that is out of this world.
LATEST REVIEWS