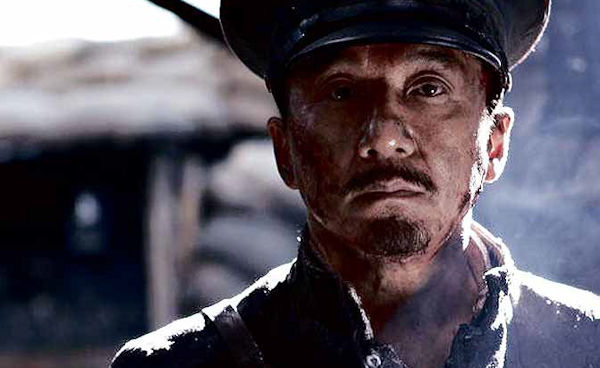 1911: Revolution is, in many ways, a film about centenaries. Having opened in China in 2011, it marks the one hundred years that have passed since the titular events of the film - the revolution that ended hundreds of years of Chinese feudalism. The film also marks Jackie Chan’s 100th film appearance, which seems much more plausible when you include his many cameo appearances over the years. You might expect then that this would be quite a celebratory film, however if you were expecting something quite uplifting and inspiring in which the Chinese people free themselves from the imperial yoke with joy and brotherhood you’d be disappointed. 1911: Revolution is a somber and slightly earnest film which is much more concerned with narrative political history than it is with telling any kind of dramatic story.

I’m not sure how familiar you are with the history of China in the early Twentieth century; I was certainly very unfamiliar with the time period and general history when I sat down to watch this film. Obviously, 1911 was made with a Chinese audience in mind who, I’m assuming, are already totally familiar with the story of the revolution. As such I feel awkward about criticising just how unaccessible this film is to those with very little prior knowledge of the relevant events and personalities of the era. It’s almost as if the story is being told in bullet point fashion and all of the narrative linking events have been left out. Characters often appear with a caption telling you their name as if we’re supposed to understand who they are and why they’re here but then disappear and are never seen again. If you’ve ever been to one of those historical theme parks where you get onto some sort of cart that takes you around various displays depicting important events while a disembodied voice gives you a brief snippet that explains what’s going on, you’ll have a good idea about what watching this film feels like (except most of us will be remaining stationary while we watch).

To set things up, I will say that the Qing Dynasty which has ruled China for two hundred years has become corrupt and many people feel it has failed to allow China to join the modern industrialised world. The ruling emperor is technically a child and therefore the Dowager Empress (Joan Chen) is serving as his regent. The coming revolution seems to be being run from abroad with Dr Sun Yat-Set (Winston Chao) leading the intellectual movement from San Francisco's Chinatown while his compatriot Huang Xin (Jackie Chan) leads the physical assault on the ground. Political speech making and brutal trench warfare alternate with one another until the Qing are finally defeated and we can get into the exciting business of founding a Republic.

1911 feels to me like a film which was originally much longer, but has been mercilessly cut down to meet running time demands. Often there are plot strands or relationships which have been left hanging or cease to make sense. Li Bingbing’s character, for example, is reduced to a few wistful looks and wailing over fallen comrades. It feels as if her relationship with Huang Xin should have had a full and emotionally satisfying arc, beginning with their being forced to ‘play’ husband and wife before falling in love for real whereas the audience is left to assume this is what has happened without being shown any evidence. There really is nothing between ‘oh how awkward’ and ‘please don’t go off and die because I love you!’. Luckily Li Bingbing is a talented enough actress that her brief scenes do make a degree of sense despite the underdeveloped script and her chemistry with Chan’s Huang Xin is good enough to shoulder some of the burden.

The action scenes are all very impressive and you can really tell there’s been a lot of money thrown at this film. Jackie Chan even has a brief martial arts sequence towards the end (which to be honest doesn’t fit into the narrative, but you can’t have everything). However, the film can’t seem to decide what sort of movie it wants to be and is often torn between the battlefields and the boardrooms. Where many films about revolutions would emphasis the human struggle and the earnestness and righteousness of the rebel forces, 1911 is much keener on showcasing Sun Yat Sen’s political philosophy. It’s quite sad to see Sun proudly talking about his vision for the new modern, democratic China where art and industry would flourish and the people would be free to choose their own government. The dream of his ideals doesn’t even make it to the end of the film, let alone its implementation. For all the good Sun and his comrades hoped to do, their revolution would ultimately fail - the Republic would fall to a military ‘Emperor’ and the country would be plunged into a brutal civil war period which would only end with the beginning of the Communist Era. Although it might at times feel like an old Soviet propaganda film, some of its messages are quite strange ones to have been endorsed by the Chinese government.

I find it quite difficult to recommend this film as a piece of art or entertainment. If you have very little knowledge or interest in the historical background to this film I don’t think you’re going to get very much out of it. Even if you happen to be a Chinese history buff and 1911 is something that’s likely to interest you, you probably know all of this already and will simply be bored. Ultimately 1911 is another one of the state sponsored Chinese historical epics that have prioritised factual narrative over story telling. In cinema there needs to be drama and unfortunately 1911 fails to generate anything sufficiently interesting.

Mandarin with English Subtitles. Extras are made up of an audio commentary by Bey Logan, trailer gallery and TV spots, a behind the scenes gallery, a Hong Kong press conference featuring an interview with Jackie Chan, Li Bingbing and Winston Chao and an interview With Li Bingbing.

5
A dull and inaccessible guide to the Chinese Revolution.
COMMENT AND DISCUSS
blog comments powered by Disqus