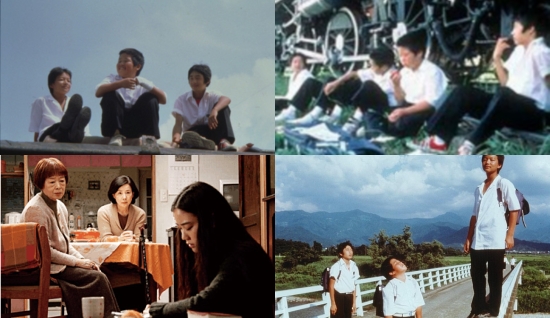 Sadamoto is the sort of teenager that just rubs people up the wrong way. Cocksure, sulky, manipulative and bossy he’s equally unpopular with his own age group as he is with the adults. He is, however, just charismatic enough to have built a group of loyal followers around himself. The other boys are in total awe of their leader and depend on him for everything - he tells them exactly what they will write in the diary entries each child has to complete as part of their homework and he decides exactly how it is they will be spending their time. One such use of this control over the group is taking advantage of a five finger discount from the little old lady who runs the corner shop. Given that we’re within a fairly small town in 1980s rural Japan, this might not have been the smartest idea seeing as someone is bound to work out what’s going on eventually.

Thanks to another, though this time accidental, misdemeanour and a blabbermouth gang-member it’s not long before this happens.  As you might expect there’s a hell of a fuss; a scene where the boys are holed up in a science lab watching out of the window as their parents descend across the sports field illuminated only by a the circle of light cast by the sports lamps is like something out of a horror film. The feeling of encroaching dread is palpable. What seems most unusual, to a Western perspective at least, is how much of a role the school takes upon itself in their punishment.

For the boys’ schoolteacher it’s like the previous forty years since the war never happened; his attitude is straight out of a film set in the 1930s. He believes there are really only three sorts of people - humans, tame humans, and scum. He even keeps a chart on the wall showing which of the groups each child belongs to at the current time - as you might have guessed our heroes have found themselves firmly in the ‘scum’ column. After making the boys publicly admit to their crime he insists they write a thirty page self criticism to show how sorry they are. Sadamoto writes his quite quickly and unusually truthfully. He titles it ‘I am an Onion’ and details just how dissatisfied he is with his own life, that he doesn’t know why he lies all the time and ultimately that his own behaviour disgusts him. Although the teacher doesn’t very much care about Sadamoto’s inner turmoil, he approves of the essay and wants to enter it in the cultural festival, much to Sadamoto’s consternation.

For the other boys who didn’t complete their essays their punishment is far from over. Tough tasks of physical endurance - being made to stand at the front with arms held out right through class; running an unreasonable number of laps in a short time; holding heavy buckets full of water until the teacher says it’s OK to stop. The teacher seems to have taken it upon himself to reform their characters and seems to think he can sweat some morality into them. Perhaps if he taught them anything of practical value other than veiled platitudes about physical strength and obedience they might be better placed to become valuable members of society by his own standards, but as it happens his harshness will have devastating consequences for Sadamoto and his friends.

The boys, by our definitions at least, are only ever petty delinquents. They shoplift and talk back but it isn’t as if any of them are violent or wilfully malicious. Not that I’m condoning shoplifting and cheating on your homework but when you compare the sort of delinquency you see here to that you see in All About Lily Chou-Chou, Sadamoto really is just a confused and troubled young man who is compelled to rebel against an overly conformist system. None of the children are really all that ‘bad’ or beyond redemption but you can see how the treatment they receive and the way it makes them feel could lead to a vicious circle of rebellion - punishment - rebellion.

Although there are times when an idyllic childhood shines through - boys play-fighting or playing ball games in empty fields at twilight - the tone of Bad Company is wistfully melancholic. There’s a tremendous sense of loss and regret over a misspent youth and a hankering to return to the happier parts of it. Like the similarly themed film Stand By Me, Bad Company also ends with the older Sadamoto recounting what eventually happened to himself and his friends and as in Stand By Me the ending isn’t always happy. Bad Company feels intensely autobiographical and perhaps there’s also a frustration that the smallest choices made in childhood can so greatly divert the course of someone’s life.

Bad Company is a film that will ultimately play best with men who are around the same as the protagonists would be now. There’s a healthy dose of nostalgia about what it was like to grow up in a small country town with nothing much to do before modern diversions such as home gaming systems and the Internet became prevalent. If your own childhood was vastly different you may find it more difficult to engage with this film but nevertheless it’s a very interesting film about the destructive legacy of one’s youth.

Bad Company was screened as part of the Japan Foundation Touring Film Programme, which takes place in London, Sheffield, Edinburgh, Glasgow, Belfast, Bristol and Nottingham.  You can find more details about these events on the official web site.

7
A melancholy look at growing up in rural Japan in the early 1980s that might prove frustrating to those whose own back stories are entirely different, but there is still a lot to admire in this unusual coming of age tale.
COMMENT AND DISCUSS
blog comments powered by Disqus