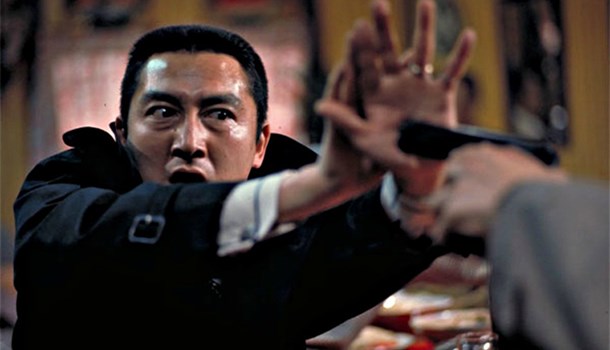 Cops vs Thugs - a battle fraught with friendly fire. Arising from additional research conducted for the first Battles Without Honour and Humanity series and scripted by the author of the first four films, Kazuo Kasahara, Cops vs Thugs shifts the action west but otherwise remains firmly within the same universe. This is a world of cops and robbers, but like bored little boys everyone seems to forget which side it was they were on - if they truly were on any other side than their own. There are few winners, and losers hit the ground before feeling the humiliation, but the one thing which is clear is that the thin blue line is so thin as to almost be transparent, and if you have to choose your defenders a thug may do as well as a cop.

A dodgy looking guy in a dirty mac roughs up some equally dodgy looking kids. Given that the shady looking fella is played by Bunta Sugawara you’d peg him for a petty thug, but against the odds Kuno is a cop - just one with a taste for crumpled raincoats. The town he’s policing is one in the midst of ongoing gang strife following a series of breakaways and civil wars throughout the '50s. Things are coming to a head as rival bosses of the two breakaway factions, Hirotani and Kawade, vie for power while a former yakuza politician, Tomoyasu, does his best to stir up trouble between them that Kuno is trying to keep from exploding into all out war.

Cops vs Thugs is as cynical as they come but slightly more sympathetic to its desperate, now middle-aged men whose youth was wasted in the post-war wasteland. The central tenet of the film is neatly exposed by a drunken gangster who points out that at heart there’s little difference between a cop and a yakuza aside from their choice of uniform. Policemen, like gangsters, follow a code - the law - carry a gun, are fiercely loyal to their brotherhood, and at the mercy of their superiors. Good jobs were hard to come by in the devastation following the surrender, in fact one of the reasons company uniforms became so popular was that no one had decent clothes to wear and a providing a uniform was a small thing that a company could to do increase someone’s sense of wellbeing, community, and engender the feeling of family within a corporate context. The police uniform, even if it’s reduced to a badge and a gun, does something similar, as do a yakuza’s tattoos. They literally say someone has your back and will come running when you’re in trouble.

These drop outs with nowhere left to turn eventually found themselves one side of a line or on the other - the choice may have been arbitrary. Kuno says he became a cop because he wanted to carry a gun, something he could have done either way but for one reason or another he chose authority over misrule. Cops being friends with yakuza sounds counter intuitive, but many of these men grew up alongside each other, attended the same schools, perhaps even have relatives in common.

Both the police and the yakuza claim to be the defenders of honest, working people but neither of them quite means what they say. Police brutality is rife while yakuza battles reach new levels of violent chaos including, at one point, a beheading in the middle of a sunlit street. Yet the greatest threats to the population at large aren’t coming from such obvious sources, they’re hardwired into the system. Sleazy politico Tomoyasu spends his time in hostess bars and schmoozes with gangsters he uses to do his dirty work while the press look on gleefully at having something to report. Kuno may not be a candidate for police officer of the year, but he tells himself that his policy is one of appeasement, and that working with organised crime is the best way to protect the ordinary citizen. When you’re forced to work within a corrupt system, perhaps there is something to be said for flexibility.

For all of the nihilistic cynicism Fukasaku retains his ironic sense of humour, staging a violent, inefficient, and bloody murder in a tiny room where a sweet song about maternal love in which a woman sings of her hopes for the bright future of her son is playing at a healthy volume. Corruption defines this world but more than that it’s the legacy of post-war desperation that says on the one hand that it’s every man for himself, but that it’s also necessary to pick a side. Cops, thugs - the distinction is often unimportant. There is sympathy for these men, and sadness for the world that built them, but there’s anger here too for those who play the system for their own ends and are content to see others pay the price for it.