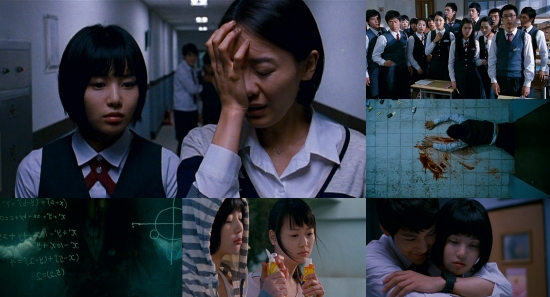 Mid-terms have just finished at an elite Korean high school, the students’ results proudly displayed on TV screens in the corridors. After blowing off some steam at an end of exams party, the most talented students return to school for an extra special exam class. However, just after the classes begin the TV sets are hijacked and the image of a classmate trapped inside a fish tank rapidly filling with water fills the screen. A disembodied voice informs the teachers and students that there will be some additional tests - get the answers wrong and someone will die, solve the puzzle and save their friend. However, panic ensues and no one really pays attention to the riddle, meaning that the girl on the screen dies while her stunned schoolmates look on helplessly. The students will need all their wits about them if they’re to figure out what’s going on and survive these deadly mind games.

Death Bell starts out like a typical ghost/grudge supernatural horror film, then moves onto the prisoner/puzzle genre, but at its heart feels as if it wants to be a teen slasher movie. Unfortunately, none of these elements work particularly well together and you’re left with a hodge-podge of ideas that result in a film with a seriously fractured sense of identity. It can’t make up its mind what it wants to be - it broadly feels as if it should work as a decent slasher thriller, but then someone’s tried to add in a bit of pseudo-intellectual twisted genius torture porn into the mix to try and bring it up a little. I’m not saying films, and horror films in particular, necessarily have to conform to a specific genre but the mix of genres here don’t complement each other at all, they just confuse the film.

From my point of view the Saw-esque moments of the movie are probably the weakest. The set-ups aren’t particularly inventive and neither are the payoffs. I’m not really a fan of the torture porn genre anyway, but I didn’t feel the film set up the sufficient level of suspense or interest in the victims for the test sections to seem all that interesting. It seems to take a really long time for the others to figure out the truth about solving the tests, while the film also fails to conjure up any sort of atmosphere of danger or menace - it simply doesn’t ever feel scary.

Death Bell also borrows liberally from other well known horror films of various genres. There was one moment where I was convinced that it was going to entirely co-opt the twist ending from an eighties slasher that everyone misremembers the killer from but luckily the film cleverly wrong-footed me and pushed off in a slightly different direction. However, it stills feels quite derivative in places and ultimately the ending is quite predictable. I’d usually say that it’s pointless to complain about films like this not making sense, but the plot-line here is so ridiculous that even to think about it will completely ruin the film. Don’t think about why or how, the answers to those questions do not lie in our reality.

This is Yoon Hong-Seung’s first feature, up until now he’s mostly been known for music videos. This background really comes through in a negative way as the film starts to feel like a series of set pieces loosely tied together, flashy and superficial like a collection of music videos. There are some nice shots now and again and some creative editing, but really it’s just so much style over substance. It feels like it lacks ambition somehow, as if there wasn’t much of a desire to do anything very interesting, new, or different. There isn’t any sort of depth either - there’s no social or psychological insight on display and as I’ve already mentioned it isn’t entertaining enough to work on that level either.

Unfortunately, Death Bell commits the greatest cinematic crime of just being boring. It’s not awful, but it’s not especially exciting or engaging either. You never build up much of a connection with any of the characters and never really come to care for them so by extension you never care about what’s happening to them. It’s the sort of film you’ll completely forget you’ve seen until you end up watching it again, and then right at the end remember you’ve seen it before and you’ll feel annoyed to have wasted the time all over again. Death Bell was successful enough in its native Korea to warrant a sequel, Death Bell 2: Bloody Camp (ahem), but I can’t say it’s something I’ll be going out of my way to get hold of - then again, if the opportunity presented itself morbid curiosity may get the better of me.

As a final side note on this release, and more specifically its video quality, the movie is presented in a non anamorphic 1.78 transfer. 4:3 letterboxed widescreen does seem very disappointing for such a recent film being released at this point in time.

Korean 5.1 and 2.0 audio with optional English subtitles.  Extras are made up of music videos; “making of” film, make up and music features; trailers for Death Bell, other Terracotta releases and the Terracotta Festivals.

5
Not bad exactly, just dull - an average teen horror movie that fails to offer anything new and ultimately fails to satisfy on its own terms.
COMMENT AND DISCUSS
blog comments powered by Disqus