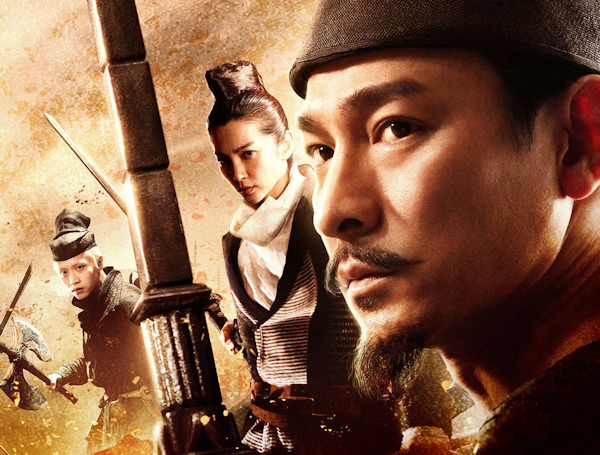 Tsui Hark, once one of Hong Kong cinema’s brightest lights, has been having (to put it politely) a bit of a lull of late.  Even so, a new film from an old master is always eagerly awaited, even if expectations are being carefully guarded. They need not have been on this occasion, as although it may not reach the dizzying heights of some of his previous hits Detective Dee and the Mystery of the Phantom Flame is Hark’s best film in years and a definite return to form.

Dee (Andy Lau) has been languishing in prison for eight years after raising questions about the Emperor’s death and the role of the Empress (Carina Lau) in it.  A nasty spate of spontaneous combustions threaten to put a serious damper on the upcoming coronation and a mysterious message from a talking stag sees Dee temporarily released to clear up all this bursting into flames nonsense.

Aiding (or hindering) him in his task are sometime sidekicks/adversaries Shangguan Jing’er (Li Bingbing) and Pei Donglai (Deng Chao). Jing’er is a handmaiden of the Empress with a few tricks up her sleeve, such as a giant whip and fearsome martial arts skills - she is certainly not all she seems. Pei Donglai meanwhile was the previous officer on this case and is therefore antagonistic towards Dee. You will hate him at the beginning and love him by the end.

All right, so it’s not the most complicated mystery in the world. A simple look at the cast list is going to give you a big head start on where this is going and there’s an obvious fantasy element that fans of the more logical “whodunit” approach might criticise. What the film does prove to be however is lots of fun. If you were pulled in by the sound of the title and were expecting an old fashioned rip-roaring slice of ridiculous adventuring you would be very well satisfied. In terms of enjoyment I really can’t fault this at all.

I’m not generally a fan of digital photography. It often appears washed out or over lit or just doesn’t look or feel cinematic. This, however, looks fantastic. It’s amongst the best digital productions I’ve ever seen. The film’s look is very unique and there’s obviously been a lot of work put into production design and detail. The same cannot be said for the CGI, which is universally awful and is the only thing that really brings the film down. In some ways it adds to its charm, much as teetering walls and papier-mâché monsters did in the old days, but in others it reminds of you rubbish virtual backgrounds from for schools programming or VR gaming in the mid 1990s. For me it’s not a deal breaker, but if ropey CGI is something that really you can’t stomach I’m afraid this might not be the film for you.

As for the Blu-Ray release we’ve looked at here, the audio and picture quality is absolutely excellent - CineAsia’s release is almost perfect, while also providing a whole host of supplementary features. The Commentary from Bey Logan is, as usual, very interesting even if it occasionally falls into ‘people I know in China’ mode.  He’s particularly enlightening on the historical and literary background as well as on the careers of Hark and the cast. There is also a selection of interviews with the cast and creative staff in Mandarin or Cantonese with English subtitles, together with the usual making of features, trailers etc.

Detective Dee is a tremendously fun piece of old fashioned hokum. It’s time to welcome Tsui Hark in from the cold; we’ve been missing his particular brand of crazy for quite some time!

Mandarin 5.1 and 2.0 audio with optional English subtitles (appearing within the image frame).  Extras consist of commentary from Bey Logan, an interview gallery, artwork gallery, behind the scenes feature, an intro to CineAsia and trailers.

9
Ignore the awful CGI, embrace the ridiculous adventuring and this is the most fun you’ll ever have watching a Chinese historical epic!
COMMENT AND DISCUSS
blog comments powered by Disqus