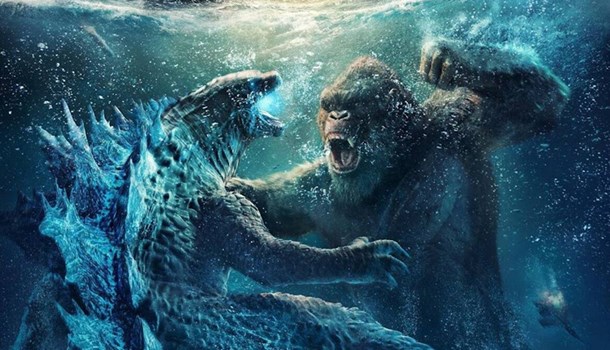 For those of you who need a refresher, Godzilla Vs Kong is the latest and likely final entry into the latest reboot of the two titanic titular characters by Legendary Pictures. So far Kong had a pretty solid period adventure flick (Skull Island) which has thus far been the best of the bunch, while Godzilla has had a pretty rough time of things and has only just about managed to make audiences forget about the time he hung out with Matthew Broderick. Now however it’s time for them to square off for the title fight, but can this be everything the fans have been crying out for?

Several years after the events of King of the Monsters, the world has remained largely untroubled by the titans. Godzilla swims around the ocean, Kong is on Skull island and the rest of the titans... well those are mostly AWOL. Things are about to kick off in a big way however, as a seemingly random attack by Godzilla on an American technology company coincides with said company persuading Kong’s keepers that they could use a giant ape to lead them to a hidden power source inside the centre of the world. A move that sets the two beasts on a collision course to see who is the true king.

It’s always best to start out with the positives, so let us state right now that the soundtrack and sound design of this film are outstanding. Thomas Holkenborg (also known as Junkie XL) really does a fantastic job here. It’s a shame that this film is coming out right after the awards nominees have been announced for the major awards, as he will likely be overlooked by the time of next year's awards season and he truly deserves some recognition here.

If the fact that we’re talking about the score so early on starts ringing alarm bells well... you’d be right to worry. It’s not like there weren’t other warnings either to be fair – the fact is after all that this film pretty much only exists at all because it was already mostly done by the time King of the Monsters came out and bombed at the box office...

The major issues all stem from the plot, which rather makes matters worse given that ‘put big ape and big lizard in same place and they fight’ would seem like a pretty straightforward and simple story to do. Kong as it turns out is the main issue here given that the film-makers clearly recognised that no matter how much bigger they made him nothing was really ever going to stop Godzilla from burning him to a crisp in a matter of seconds. This is made even more apparent by the film's opening minutes basically confirming that Kong is so weak that humans can take him out whenever they feel like it and have been able to do so for some time! The film therefore spends over an hour, in which the top-billed lizard barely appears, by essentially sending Kong off on a quest to power up to the point where he might stand a chance in the fight and even has to resort to giving him a magic axe to help out (we honestly thought he was going to get a super suit when he picked it up!).

Things are compounded further by having two main groups of human characters, none of whom are particularly interesting or well drawn out. Half of them have nothing to do other than follow Kong around like a dog-walker holding a plastic bag at the ready, whilst the other half mostly just give an excuse for the kid from the last movie to still be around.

The visuals are disappointingly so-so throughout. Godzilla looks pretty great but the film's budget clearly didn’t stretch to making Kong’s fur texture match the big G's standards. When another character turns up (and stop here if you want to avoid mild spoilers) you have to wonder what happened as the beast in question doesn’t manage to look remotely as good or as well designed as it did when Mr Spielberg used them for a cameo several years ago.

Nothing seems to have any weight to it during the fights, and the titans mass shift more than G1 Transformers (Careful now! - Ed) as one moment they stand easily on top of buildings and the next the buildings seem to be made of sawdust and fall over just by being looked at. At one point Kong jumps onto the deck of a ship and we spent the rest of the scene wondering why he hadn’t just gone through the deck and ended up wearing it like some furry Kancolle girl!

Sadly, there's also little originality in the big fights, and these should be the films shining moments. The big two’s first encounter is ripped straight out of an episode of Neon Genesis Evangelion and the second bears more than a little similarity to Pacific Rim, and neither are really all that much fun. What likely doesn’t help much is that the big two are both so grounded in what they can do and the film takes everything so seriously. It would have been helpful to find something to go over the top with – one of Godzilla’s more bizarre enemies perhaps. Heck, we already mentioned thinking Kong was going to get a super-suit at one point – perhaps they should have done just that!

What you’re left with is not the worst of these reboots by any means (still looking at you Broderick) but it’s not exactly good either especially when you have to fork out £16 to watch it pay-per-veiw. What continues to be agonisingly disappointing about these films is that there is clearly so much potential for them to be good if they got a solid creative team on them – imagine if Del Toro or Hideki Anno was calling the shots!

In the end though, if you want to put up the cash this’ll kill two hours. That said, you won’t really have missed anything if you give it a miss and go watch Skull Island again.

4
A $200 million way to settle a playground argument.