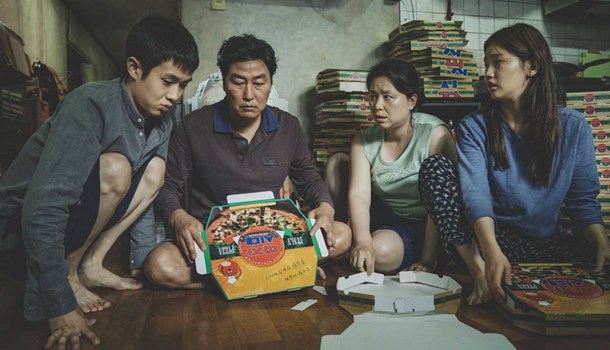 Though not a Japanese film, we occasionally dive into Korean culture (especially as Ross works out there a lot) but seing as the film made history at the Oscars and happened to be on at baby cinema this week, my daughter Thea and I thought it was worth a watch and letting you know what we think. Well, what I think, as Thea slept through half the film and played with an empty sandwich box for the other half!

The film follows the fortunes of the Kim family (father, mother, son and daughter) who live in one of the poorest areas of the city (presumably Seoul, although I did not see this stated). Their poverty is made clear as you observe them watch a man taking a pee outside the window of their basement apartment and discuss how best to steal the wifi of a neighbour. They are all out of regular work and are only managing to feed themselves by earning a pittance building boxes for a local pizza shop. Their fortunes change when the son (Kim Ki-woo) is asked by his friend Mi to take over his role as English tutor to the daughter of the extremely wealthy Park family. In order to do this, Kim Ki-woo forges credentials and wins the trust of Mrs Park (Park Yeon-kyo). Before long the whole Kim family have conned their way into the lives of the Parks and if they are able to keep up their alternate personas it looks like they are set to make a killing. However, not all is as it seems and whilst the Park family are away for the weekend and the Kim family are abusing their absence, a knock at the door signals the start of a series of events that escalate from the unexpected to the downright bizarre. I don’t want to give anymore away about the plot, because I went into this film knowing very little and that was one of the best things about the experience.

I very rarely watch subtitled films, largely because I am not a fast reader, but really didn’t have any issues here, particularly because the film was so engrossing. I did think that maybe some of the emotion was lost in translation, because there were points where I wasn’t sure whether I should be laughing, crying or disgusted!

At the outset it looks like the tale of a family severely down on their luck and makes you think that it is merely a drama which looks at the lengths to which they will go to make a living, but it turns into so much more - "dark comedy" is probably the best pigeon hole for it. Hidden within the extreme storyline is a great deal of genuine social commentary as you observe how the struggles of the Kim family bring them together whilst the rich Park family members seem somewhat distant.

The movie is well acted, beautifully shot, suspenseful and I even found myself tapping my foot to the track played over the end credits – it was in Korean with no subtitles and the tune didn't really match the tone of the ending, but I loved it and will be looking up the lyrics to see how they fit in.

There were definitely performances worthy of Oscar nominations, making me question whether the adversity issues the Oscars has taken heavy criticism for might not be improved by opening up the acting categories to more nominees (which currently stands at only five per category, whereas there were nine best picture nominees this year). It is hard to pick out individuals from such a great ensemble cast - though the entire cast shone, but if my arm were twisted I would probably single out Kang-ho Song (as Kim Ki-Taek, the father of the Kim family) as truly Oscar worthy.

On leaving the cinema, my fellow mums and I had universally enjoyed the film, even  realising that we had pretty much all forgotten we were reading subtitles about ten minutes in!

However, one of our number couldn't understand why it had won the Best Picture Oscar. Having thought for a moment, I asked if she had ever seen another film quite like it. She certainly hadn't and that seemed to satisfy her. I’m pretty certain that if you were to go and see it, and I completely recommend that you do, then you are highly likely to come out feeling the same way – you may love it, you may hate it, you may think it was bizarre, but you definitely won’t have seen anything quite like it before, making it very much worthy of the little gold statue win in my opinion, even against 1917 which I also very much enjoyed.