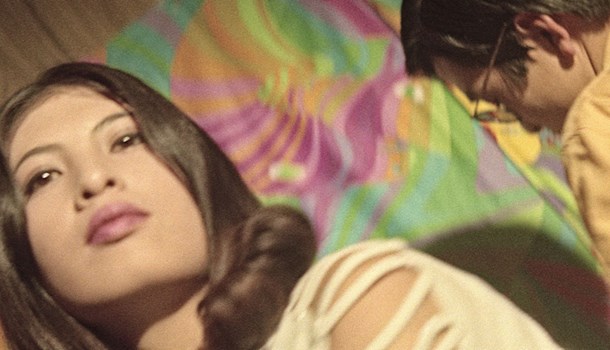 Verbose though I may be, I’ll not repeat my introduction to pink films though if you need one I mercilessly cadged one from Jasper Sharp in my perusal of Pink Films vol. 1&2 – enjoy that if you need to.

Being a film of the 1980s Abnormal Family disabused me of a random notion I’d picked up that pink films were more of a 1960-70s phenomenon; the the video essay on the disc by Jasper Sharp on the disc confirmed it, clearly drawing a line to their existence today. Abnormal Family is the first and the best film of this set. Curiously, it’s a pastiche of films of Yasujiro Ozu, and starts with a wedding but this we don’t see, instead we’re introduced to the family around a table as above them are bride and groom are alone (we imagine for the first time). What then transpires is a sex scene bizarrely devoid of eroticism. The bride, Yuriko, seems to welcome her husband, Koichi’s, faceless advances with about as much pleasure as finding you are going to have a very sudden and very unwelcome rectal exam. You suspect it’s intentional, the husband being almost unseen apart from his gropings, the attention then focusses on Yuriko.

It’s is however not an actor’s film, the star is director Masayuki Suo, who would go on to make the hit Shall We Dance? He frames the film as would Ozu and edits the film so that it illustrates the division in, and separation of, the family. Often conversations take place with only a single character in the frame, delivering to the camera so that you lose a sense of time and place and if the characters are even talking to each other or if we are just seeing elements of several monologues edited together to create what appears to be a conversation. It’s symbolic of course about how the family unit is dysfunctional, their emotional separation breaking them apart. In many ways it makes Abnormal Family become a stilted viewing experience but if it stilted you again suspect it’s intentionally so. This may be a pink film but it’s a pink film that has a point to it. Masayuki Suo clearly is working in the pink genre, considering the amount of sex and nudity on screen, but a little like Seijun Suzuki in Branded to Kill, he renders the eroticism unerotic and either kinkily disturbing or absurd.

Koichi philanders, enters into an S&M relationship with the owner of a bar that his father fancies and the film further ventures into more absurdist territory. Any S&M action is tempered with a sense of the ludicrousness of it all. Again, what could be eroticised is a reminder of how the family barely even seems to care that Koichi abandons his new wife.  Everyone is too wrapped up in their own drama, including the sister, Akiko who realises there are other more carnal places to work than in an office building.

Considering the opening of the film struggles to fully engage what emerges is a quietly discombobulating, frequently absurdly amusingly, ambiguous, but also very skilled film. It’s not a surprise that Suo would go on to bigger and better things, as Abnormal Family pushes the pink film genre, perhaps to its limit, and his skilled hand is very clearly in control and the resultant film you suspect is exactly as he planned it.

It is also mercifully short, barely over an hour and I felt the film couldn’t carry any more. In fact, like Tsukamoto’s recent, Killing, the film ends at just the moment you think: ah, the perfect time for this film to end. This in itself is a rarity and a rare treat.

Blue Film Woman is more recognisably a pink film, crossing over like Trapped in Lust, into elements of a crime/yakuza movie. It’s also the most obviously entertaining of the two films, even if Abnormal Family is the classier affair.

Bankrupt and in debt to his loan shark, Mariko’s parents suffer indignity and death in attempts to stave off their repayments. Mariko determines to take revenge upon those responsible for her family’s tragedy, and her life spirals from respectability to prostitution.

An early colour pink film, BFW’s makes the most of it, frequently layering psychedelic colours and so is very much of the late 60s period, even if a first for the pink film. Equally its story feels like so many of the time: innocent woman takes revenge against man who has wronged her, though she finds herself descending into a life of crime and or depravity. Sadly, unlike films such as Female Prisoner Scorpion series (incidentally the first film of which has more nudity than BFW), where Meiko Kaji’s Matsu sticks it to the man (literally, sometimes) and becomes a figure of defiance (her performance in the second film Jailhouse 41, almost entirely silent, is pretty remarkable), Mariko is more of a victim. Mariko is forced to sell her virginity, whereas terrible things might befall Kaji’s Matsu, she is unbreakable; Mariko you feel is a victim in the film, even more than the men she then blackmails as part of her act of vengeance.

BFW then becomes very much style over substance, subtlety or nuance of character is entirely absent. But its stylistic colourfulness definitely pull you through, though the film would arguably would work better as a straighter yakuza genre picture and one where Mariko is less passive in the events around her.

I also have one big issue with the film. Beyond the obvious unpleasant plot point of Mariko’s mother having to sleep with the lecherous loan shark, what is worse is she’s then encouraged to sleep with the loan shark’s son. The son is kept in a shack and as Mariko’s mother is shocked to discover, is mentally ill. The manner of the son’s mental illness is reminiscent of the prostitute’s brother in Female Prisoner Scorpion: Beast Stable. Both films seem to frame mental illness as manifesting itself physically in a drooling wreck of a subhuman thing that if it sees a woman must naturally attempt to sexually assault it. The apparent link between mental illness and an almost bestial blind sexual need to assault is senseless and insulting. The son eventually rapes his own loan shark father, one assumes an attempt at rough justice in the film but nevertheless it all leaves an unpleasant taste in the mouth. Beast Stable at least attempts to frame the brother’s situation and nuances it with the relationship with his sister, but BFW focuses more on the loan shark’s almost desperate attempts to get his son laid and the son's apparent grotesquerie.

In many ways Pink Films Vol. 1&2 was always going to be a hard act to follow and 3&4 just cannot live up to it. It doesn’t help that Vol. 1&2 had Inflatable Sex Doll of the Wastelands and the connection to Branded to Kill (which I am happy to gush about at a moment’s notice) will always help to keep my attention; Gushing Prayer was as much political film as porno so it was always going to be difficult to get films to match up. That said Abnormal Family is almost worth the price of admission alone as it seems such a one off (whether it really is would take someone better versed in Pink film than I) and from an historical perspective, including the early exploration of colour, you can understand why BFW was included, even if some of the story is less palatable.

Though these films won’t be for everyone Third Window should again be congratulated for expanding beyond some of the more narrow confines of what is released and long may they continue to do so. Onwards to the final Vol. 5&6 sitting on the shelves.

7
not as radical or exciting as Vol. 1&2, but Abnormal Family pushes boundaries and Blue Film Woman luxuriates in colour
LATEST REVIEWS