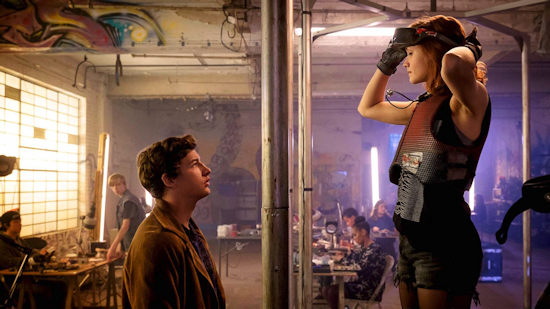 Based on the best-selling young adult novel of the same name, Ready Player One is a love-letter to nostalgia, riding the wave started by Stranger Things and the recent IT movie remake among others.

The story centres around an online environment called The Oasis, a hub of worlds created by a single programmer (my first and only derisive snort throughout the film) by the name of Halliday, the world's richest geek. Before his death, Halliday hid 3 keys with which to unlock an Easter Egg and therefore take control of the Oasis and Halliday's own fortune - a somewhat quirky form of last will and testament, and open to a lot of abuse. Geniuses eh?

This leads a mega-corporation named I.O.I (Innovative Online Industries), lead by a corporate dick named Sorrento (played by Ben Mendohlson) to use their considerable resources to try and locate the keys - to which end they have a shiny, Tron-like room full of agents called "sixers" who are faceless minions in-game, a stark contrast to the colourful characters controlled by our plucky teens from their ramshackle abodes. It's an old staple, but then that's kind of the point.

Speaking of, our heroes are an almost comically diverse set of individuals with some very stereotypical identities, but to avoid spoilers I won't go into it - let's just say that every major market of interest to the distributors is well served by the cast. Recent complaints from some quarters about a lack of diversity are utterly laughable.

Tye Sheridan (Wade/Perzival) and Olivia Cooke (Samantha/Art3mis) are solid, if unremarkable, leads. In the book, both are supposed to be rather plain, but Hollywood doesn't do plain people, so I invite you not to laugh too hard when Olivia Cooke is revealed and is somewhat bashful about her looks. Oh, Hollywood.

The action flicks between the real world and utopian Oasis and here Spielberg's eye for sci-fi is certainly on form. The gadgets look suitably real-world (i.e. slightly daft) but believable. Showing the corporate thugs being killed in-game by their lights going red is a great way to show a real-world consequence of what's happening in the Oasis, and that leads to a lot of excellent fight scenes and set pieces. One nitpick on the tech, however - once an IOI player is killed in-game, they have to remove themselves physically from the cradle and go to a "respawn" area, a very clunky idea that seems to exist only to further a particular scene later on. When you aim a film at gamers, this kind of clumsy tech sticks out like a sore thumb.

So let's get on to a few slight spoilers (skip this paragraph if you want to remain unsullied) that made for my favourite parts of the movie. Firstly, the entire Shining section was a complete delight. Roaming around the hotel, with the knowledge of what awaited, was absolutely thrilling and I bloody loved every second of it. Likewise, elements of the battles were breathtaking, and since it was in the trailer I'll say that Ready Player One is by far the best argument I've ever seen for a live-action Gundam movie. C'mon film people, let's get that started! Spotting the cars in the race scene was also good fun, and there always seemed to be something just around the corner to delight and surprise. Just don't overthink the premise.

As for the cast, there were two standout performances. Say what you like about T.J. Miller, but that man delivers one-liners like a modern-day Bill Murray, and pretty much every line he delivered landed. Mendohlson is a terrific corporate villain, he'd fit right in at OCP or Wayland Yutani, and I was quite surprised at a little touch of humanity toward the end that helped his character land a little more depth than most of his ilk. The humour throughout the film was on-point, and one of the stand-out moments was a joke involving a quote from It's a Wonderful Life - very left-field for a film rich in more contemporary references.

Ultimately there's no getting away from what's selling tickets here. The flood of references and easter eggs on screen is literally dizzying - there's simply no way to process them all, especially with sweeping vistas involving hundreds of characters - it could have been our theatre but I found some of them quite hard to see as the camera moved just fast enough to blur a lot of detail. It's a film that will require a lot of slow-motion replays on Blu Ray to fully appreciate. There's plenty of fun to be had with what you can see though - Robocop, Aliens, Battletoads, Chucky and oh so many more, it's a pop culture extravaganza - what's really cool though is seeing so many awesome vehicles being used to their full potential away from their respective franchises, especially the Akira bike and the Delorean. Oh, and the "boss" at the end of the film is full-on awesome.

Strip all the references away, and what you have is a so-so movie with a Spielberg touch - a VR Goonies for a modern audience. But you can't separate the two, and subsequently, you have a sort of cut-and-shut film, part video game, part action-thriller throwback that's both wonderful and jarring in equal measure. Its appeal will depend almost entirely on your own experience with the material referenced - as a 39-year-old child of the 80's I had a blast with the film, despite its shortcomings. This is a pure popcorn ride handled by a master of modern cinema, and if you can let go of your inner critic (and it'll take some doing) then you can enjoy it too.

8
A film for a certain generation of kidult, but let it wash over you and this is cinematic fluff of the best kind.
COMMENT AND DISCUSS
blog comments powered by Disqus