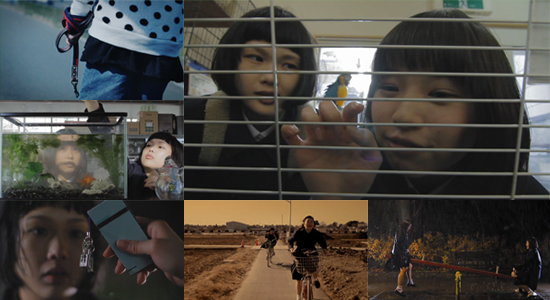 Japanese cinema has certainly not lacked interesting films about the trials and tribulations of late childhood and adolescence, but none of them have been quite as startling as Ryohei Watanabe’s Shady. Playing out like a juvenile version of Whatever Happened to Baby Jane (complete with several ‘what’s for dinner?’ style tense situations) only much less camp and frighteningly realistic, Watanabe’s film has far more to say than its synopsis might suggest. Touching on loneliness, neglect, bullying, duplicitous adulthood and abusive relationships, Shady is a taught psychological thriller handled with remarkable assurance for a first time director.

Misa Kumada is a lonely teenager who’s constantly mocked by her schoolmates. As her surname contains the Japanese word for bear and she happens to be a little thicker set than the other girls, they’ve taken to calling her ‘Pooh’, and very much not in an affectionate way. She mostly skirts around the edges of the school, trying to not catch the mean girls’ eyes. That is until another girl, Izumi, unexpectedly tries to help her out and seems to want to become friends. Izumi is prettier and seemingly someone who ought to run with the popular crowd, but confesses to Misa that she’s lonely too as she doesn’t have any friends either. What follows is just as you might expect - two lonely, sort of strange girls become friends and manage to overcome the strains of high school life through their shared friendship. Just pause there for a second because things are about to get very dark. The friendship becomes extremely intense - Izumi is the possessive sort of friend who doesn’t like her ‘pet’ to have any other sources of affection. She also, as it turns out, is a master manipulator who isn’t afraid to exploit any visible weakness for her own gain. A more serious matter is the fate of a classmate who has gone missing and hasn’t been seen in days.

There’s nothing that can really prepare you for the detour this film takes in its final third. What started off as a sweet coming of age style story about high school friendship quite quickly descends into a hellish cycle of abuse and torture. Hana and Alice this isn’t! Misa is a shy girl who’s more at home with animals than humans while Izumi is a pretty and confident young woman who is unafraid to make use of her precocious sexuality. Normally, they aren’t the sort of girls that would have very much to do with each other and the very fact that their ‘friendship’ exists is a little strange in itself. Older eyes can see there’s something a little dangerous about Izumi, but Misa is so excited to have found a friend at long last that she can’t see what she’s getting into. Izumi may very well have picked Misa specifically because she’d be easy to manipulate, and its certainly true that Misa finds it difficult to face the prospect of losing her new-found friendship even when she begins to suspect Izumi may be capable of some truly terrible things.

Watanabe handles these difficult issues with a deft touch and presents the lives of female high school students with an unexpectedly high level of realism. Considering this is only his debut feature, Watanabe displays an enviable level of control and a talent for interesting compositions that mark him out as a very promising director even this early on in his career. He’s also managed to provoke some extremely nuanced performances from his relatively inexperienced leading ladies, former model Izumi Okamura and musician Mimpi*ß. Shady is an extremely tight film with barely any extraneous material and brilliantly keeps up the tension for the entirety of its 94 minute running time, always maintaining a deep note of foreboding even before there is a hint of the mania to come.

A truly disturbing film on many different levels, Shady has to be seen to be believed. It has one of the most shocking codas and an even bolder post credits sequence (make sure you stick around for that!) of any recent film. Probing deep into the nature of friendship and the effect of loneliness, Shady has much more profound ramifications than a superficial reading would suggest. Shocking but equally gripping, this film is technologically assured debut from an exciting new director who will hopefully build on this early success in years to come.

Japanese 5.1 audio with removable English subtitles.  Extras consist of interviews with the film's director and cast.

9
An astonishing debut film. Shocking and disturbing in equal measure, this psychological thriller needs to be seen to be believed.
COMMENT AND DISCUSS
blog comments powered by Disqus