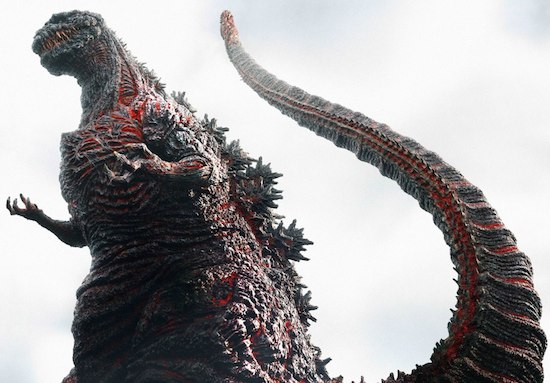 When the positive reviews and box-office success of Shin Godzilla started to become evident around its original Japanese release last year, it seemed almost too good to be true. The film had real pedigree; co-directed by the powerhouse double act of Hideaki Anno - Evangelion’s mastermind - and Shinji Higuchi, the man behind a string of big-name disaster/monster movie blockbusters including the live action Attack on Titan efforts. It seemed like somehow, the stars had aligned and a properly decent Godzilla movie had emerged, primed and ready to save us from a succession of so-so Western efforts. But all the hot air and praise can’t quite prepare you for just *how* good Shin Godzilla really is. Like a fine whiskey, initial contact can come as a bracing shock, but as you settle back and mellow in its complex flavours, its true quality spreads its way through every inch of your body.

For this take on Japanese cinema’s most enduring icon, Anno and Higuchi take a bold approach - one that owes a lot to the reportage style Anno honed on Evangelion; even going as far as to ape the exact same typeface and musical motifs as Evangelion itself. Presenting the events of the movie in a manner similar to rolling 24-hour news coverage, complete with brash, capitalised stamps of every principle character’s name and job-title as they are introduced, there’s a touch of Kinji Fukasaku’s directorial style here too, bringing an electric intensity to what will no doubt be the deal breaker to many - the fact that vast swathes of Shin Godzilla focus on what are essentially talking-head meetings between politicians and public servants.

In many ways, it’s this very Japanese depiction of officialdom that lies at the heart of the movie - with Godzilla himself as something of a sideshow. Presenting a daring, scathing view of red-tape culture and a deeply ingrained attitude of slippery bureaucracy, many of the film’s most memorable scenes impact all the harder in how close to home they strike for anyone who has run up against corporate inactivity. Something that needs doing but no-one willing to stand up and take ownership? Shin Godzilla nails this atmosphere with finely tooled precision. Casting your principal players as besuited, anonymous civil servants might rankle with some expecting chiselled, lone maverick action heroes, but for those sick of the Hollywood star-vehicle model, Shin Godzilla’s ensemble cast feel actually ends up breeding a more involved kind of empathy - placing the audience themselves in the position of Tokyo’s beleaguered civilian populace. This isn’t a battle between colossal individuals - it’s a fight to protect the very unique relationship between humanity and the cities we make our homes; something rammed home in the memorable closing scenes where Tokyo’s infrastructure itself (including bullet trains and construction vehicles) are used to attack Godzilla.

And what of the titular monster itself? Suffice to say, this Godzilla remains a fascinatingly engaging entity throughout the movie - morphing through various incarnations, beginning with a disgusting, limping fishlike monstrosity; all bulging eyeballs and pulsing gills. Godzilla has always been a giant screen presence, but this time he feels truly alien and unknowable, something utterly beyond and opposed to humanity - a literal fish-out-of-water thrashing through the boxy urban locales of Tokyo like they were paper mache. Many will no doubt envision this destruction in a uniquely post-Fukushima light, and it’s certainly hard to shake the palpable reality that Anno and Higuchi’s visual aesthetic infuses the monster’s rampages with.

Whereas the recent Hollywood incarnation of Godzilla was irrepressibly dark - almost drowning in a sea of washed out, grey-scale blandness - Shin Godzilla comes with a sleek, efficient vitality so very befitting the message it is trying to convey. The film doesn’t just *feel* very Japanese, it looks distinctly Japanese too - and while the CGI and effects work inevitably can’t compete with the scale of the Hollywood incarnations, there’s something refreshing about seeing a blockbuster film like this falling back on traditional techniques like model-work to convey a more physical, tangible incarnation of the iconic monster. This Godzilla feels real, precisely because what you see on-screen *is* real.

At two hours long, Shin Godzilla packs the scale and length befitting a story of this nature, which gradually expands to encompass some knowingly timely nods toward US intervention and nuclear weapons in Japan. The political bite becomes yet another tool in the arsenal, contributing to a can’t-look-away atmosphere that’ll have you on the edge of your seat throughout the finale. For some, the movie’s overriding tone as a sharp satire of Japanese bureaucracy and the political system will be too much - a deal-breaker to those not versed in at least some of the references the film is alluding to. But for those that the movie’s deeper message rings even slightly true for, Shin Godzilla becomes so much more than just another explosive monster movie - one with not only real heart and soul, but with a crucial social message to it. In many ways it feels almost crass to label a piece of populist film-making like Shin Godzilla an ‘Important Movie’, but it’s these more delicate notes that linger in the mind long after the mass-destruction and rollercoaster ride of big-screen thrills have faded away. This might be a Godzilla film in name and practice, but beneath this outer skin, it offers so very much more.

9
A powerfully political cinematic message told in a terrifically engaging manner. A Godzilla very much for our times.
COMMENT AND DISCUSS
blog comments powered by Disqus