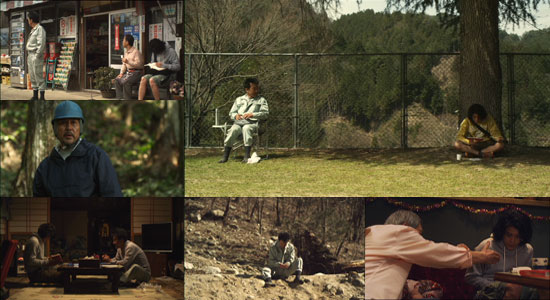 Woodsman and the Rain, The

In the quaint mountainous village of Yamamura, Japan resides the hard working lumberjack Katsuhiko Kishi (portrayed by Koji Yakusho, known for Shall We Dance and 13 Assassins fame). While performing his day to day routine, he is abruptly interrupted by a film crew requesting that he stop cutting down trees. This in turn results in this small village of Yamamura getting a little bit of excitement in their lives, allowing them to break away from their normal routines.

Katsuhiko is a fantastic depiction of the hard working male. He doesn't seem to have much in the way of enjoyment of his life, not helped by the fact that Katsuhiko lives the life of a single parent to his layabout son, who is without a job and is in his own right a representation of modern day youth. It's clear the two males of the house have very contrasting views on life and work ethics.

As the film crew continue with the production of their film, they acquire the unwilling aid of Katsuhiko as the guide for first time director Koichi Tanabe (Shun Oguri, known for Crows Zero, Azumi as well as the live-action adaptation of Space Brothers) who Katsuhiko openly demonstrates that he does not like. This is due to how lazy and oblivious Koichi is to all the hard work that is going on around him. It's clear that Katsuhiko even sees traits of his own son in Koichi.

As the days progress Katsuhiko finds himself getting more involved with the making of the film, from acting as an extra in the movie to helping as a stage hand. After watching one of the scenes from the movie, Katsuhiko begins to act what can only be described as uncharacteristically for himself. He misses days of work so he can help with the movie, he even forgets that his family were visiting the village to commemorate the two year anniversary of Katsuhiko's wife’s death, which also manages to escape his mind.

What is then born is a great and somewhat unexpected friendship between Katsuhiko and Koichi. I love the idea of this friendship blooming between the two of them - it really begins to humanise Katsuhiko as the story unfolds, although the friendship almost occurs out of nowhere, and to some degree caught me off guard.

The film is shot fantastically and employs some gorgeous outdoor shots that really helps portray this small village in the mountains. Where the film really shines is, to put it simply, Koji Yakusho - whether it is the delivery of his lines and interaction between the other characters or even his body language it all works hand in hand to deliver to its audience this story of an average Joe's evolution and change of opinion towards those around him.

I enjoyed this film throughout - I instantly empathised and cared about all the characters in the film; after all, they are just real people living their own lives and as the audience we get to see how a little change in someone’s life can change them for the better. It's a great feel-good film that will leave feeling like your one of the villagers!

The Woodsman and the Rain is available on both DVD and Blu-Ray, with extras including interviews with the cast and crew as well as a handful of deleted scenes.

8
A great feel-good movie with a number of extras - what's not to like?
COMMENT AND DISCUSS
blog comments powered by Disqus