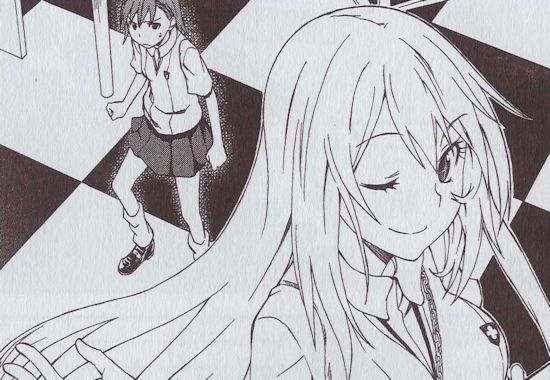 I think it's fair to say that the last couple of volumes of A Certain Scientific Railgun in particular have led to something of a love affair between myself and this series - such as been the strength of character and story-telling on show that it took an already enjoyable series to new heights of near-perfection.

Of course, all good things must come to an end, and so the start of this seventh volume of the series closes out Misaka's attempts to halt the use of her DNA clone "sisters" in experiments centred around creating a super-powerful "Level 6" esper out of the so-called Accelerator. Having built up so much of its climax in the previous volume, things come to a close in short order this time around, leaving the field open for the series to move in some new directions.

This volume seven duly does, introducing a new transfer student to Tokiwadai named Mitsuko Kongou who has ideas above her station but develops a fledgling friendship with our titular railgun, and just as importantly Misaki Shokuhou, another Level 5 esper with some fearsome powers of her own and, it seems, something of a grudge against Misaka. With Academy City hosting a prestigious sports day, complete with a live television broadcast - certainly a far cry from your average school sports day!

Even though this particular instalment of the series is really about setting things up moving forward and piecing together some new stories and plots to involve itself in (while also carefully tying itself back into the series from which it span-off, A Certain Magical Index, where it can), it still holds plenty of what makes A Certain Scientific Railgun such enjoyable reading. Its sense of comedy remains sharp, with plenty of well-placed laugh out loud moments, and it also knows how and when to leverage its characters and their relationships to their full potential, whether it's with a light-hearted or more serious end in mind.

Alongside this, the manga's art style and general aesthetic continues to be pleasing, proving adept at matching the story's tonal shifts from comedy to cutesy to violent drama as is required of it. Top it off with a continuing solid translation from Seven Seas Entertainment, and all is still well in the world of Railgun.

While this seventh volume of the series won't knock your socks off like some of its previous instalments, if you've made it this far into A Certain Scientific Railgun then you'll continue to delight at every opportunity to further explore Academy City's world and characters, and this volume is certainly not a disappointment along those lines.

8
Even though it's building towards future stories, there are still more than enough comedy and character-driven moments of interest here to keep this series on track.
COMMENT AND DISCUSS
blog comments powered by Disqus