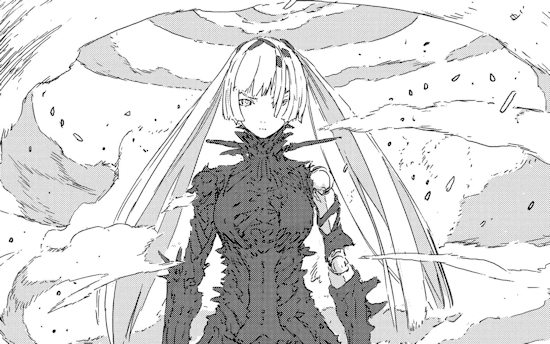 Tsutomu Nihei has gained quite the following after presenting us with Blame!, Knights of Sidonia and Biomega. His cyberpunk-infused style and dark storytelling have made him a mainstay of the sci-fi world, and his experience in construction and design have certainly shown up as major influences as massive structures are writ large across his work.

Aposimz is the latest in his oeuvre, and is set on planet which is by construction and population, artificial. Set after a major war, those who lost against The Core (where the priveleged population reside) lost all rights to live on the planet, and as such are banished to the surface where they must face extreme weather conditions and "frame disease", which turns its victims into shambling zombie-like creatures. We first meet a group of such outcasts, Eo, Biko and Etherow, foraging for resources.

The book maintains the artist's rough, sketched style, as well as his penchant for extremely violent death and destruction. I've no real taste for this style of manga, as I'm not really drawn to tales this dark. However, I do count Battle Angel Alita among my favourite books, so I occasionally delve into series like this to see if the same spark of genius is contained within, or at least find out if there's enough light to dispel the darkness.

Aposimz artificial life makes some of this destruction a little easier to swallow, but the characters are no less real for their lack of flesh and blood bodies. Initially it was hard to discern which characters we'd be following long term, but an attack on the group's homestead, known as White Diamond Beam, quickly thins out the character roster until we're left with our protagonist, Etherow, who encounters a creature named Titania. This curious mech, which is normally a small, four-legged creature, can appear as an attractive young girl who grants Etherow the power to fight back against the ruling elite. Titania contains a mysterious and much sought-after "code", and has seven mysterious bullets, all of which set off a chain of events that will forever change the planet.

The mix of body-horror imagery and violence is also mitigated by the latter chapters of the book which provide a more upbeat and hopeful look at the world. The ruling elite are an interesting bunch too, and with Etherow acting as a "people's hero" on the surface, there's enough hope to counter the oppressive feel of the downbeat opening act.

Fans of the author's works will find much to enjoy here. Since his tone is generally consistent throughout his numerous titles, you'll already likely know if this is going to suit your tastes. The good news is that the premise and characters are strong enough to start you on a new journey. Aposimz is yours to discover, if you have the stomach for it.

8
Similar in tone to previous works, fans of Tsutomi Nihei will find much to enjoy here. For others, it's a dark foray into a grim and unrelenting world.
COMMENT AND DISCUSS
blog comments powered by Disqus