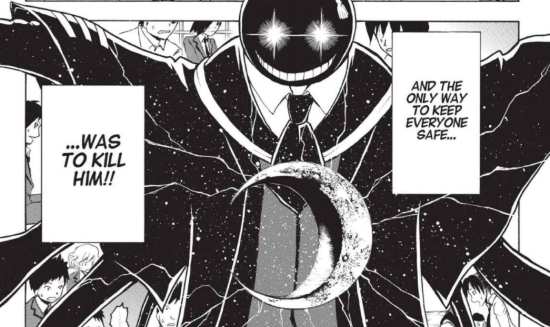 Sometimes the best ideas are the those which are almost childlike in their playful simplicity, and it's this train of thought which we suspect is pivotal to both the success and enjoyment of Assassination Classroom, which is poised to be one of the hot tickets of the winter 2015 anime season whilst its source material makes it west thanks to the release of the first volume of this Shounen Jump manga in English.

On face value, the core premise of Assassination Classroom could have been written by a young boy - its story is one of an unusual, octopus-like creature who appears one day, blows a massive hole out of the Moon and then informs the shocked populace of Earth that their planet is next. However, in the intervening year before our home world is obliterated, this planetary assailant has something else that he wants to do - that being to become a homeroom teacher at a school.

So it transpires that the bright yellow being which holds the future of mankind in his hands (well, tentacles) ends up looking after the group of misfits that comprise class 3-E at Kunugigaoka Junior High School - the bottom rung of the institution's ladder who are looked down upon by both students and teachers alike. It could be said that even the Japanese government have little interest in the safety of this lowly kids - sure, they get the creature to promise that he won't harm the children in his care, but beyond this the students are used as Earth's only remaining hope, as they're tasked with assassinating their teacher before he makes good on his promise to blow the planet to smithereens.

Thankfully, their new teacher is rather accommodating to this idea, and gleefully helps his charges to hone and improve their skills, safe in the knowledge that his unique properties and powers (including the ability to travel at Mach 40, as the manga often reminds us) makes him virtually indestructible. Indeed, Koro-sensei (as he becomes known to his students courtesy of some impish wordplay) is a great teacher all-round, giving out sage life advice as well as tips on how best to kill him, and the result is plenty of odd student-teacher relationships, with the boys and girls of the class clearly holding some love for their overseer even as they seek to end his life.

This whole story and the way that it pans out exudes that naive, childish sense of fun that we mentioned in the opening to this review - the idea of a creature that wants to destroy the planet but goof around with a bunch of kids first even though they want to kill them is, frankly, silly, but this first volume knows it and so treats the whole thing with such a lightness of touch that you can't help but suspend your disbelief and buy into its premise. Assuming you can do likewise, these early chapters are actually a lot of fun - Koro-sensei has just the right blend of friendliness, silliness and malice to pull off his role, and there are some interesting stories to be told amongst his pupils, most of which we've only scratched the surface of. By the end of this volume, and in typical Shounen Jump style, we have ourselves a student who might just be Koro-sensei's equal, to add another angle to the series just as it threatens to run out of steam.

Although we still have to wonder whether the series has enough up its sleeve to remain enjoyable in the long haul, the fresh, fun presentation of Assassination Classroom's first volume is commendable, and as long as you aren't looking for anything as sinister as its name might suggest then you're likely to have a good time reading this effort. Even the artwork of this volume has the same kind of easy, simple confidence as its story - it won't jump out from the page at you but is quietly, assuredly competent and actually does an excellent of job of conveying everything that it needs to as a result. Viz Media's translation also helps things along ably, whether it's explaining those occasional moments of Japanese wordplay or bringing the characters and premise of the series to life.

Having read this first volume, Assassination Classroom's biggest hurdle is perhaps one of expectation - this is no Future Diary or Death Note, but something far simpler and with a view towards pure entertainment rather than anything deeper or darker. Thankfully, in this case what we have instead is a pleasant surprise that is as enjoyable as it is undemanding, making it easy to see why it's become popular. Even if the series runs out of ideas in future volumes, there's more than enough here to leave you smiling, and we can only hope that there's more of the same to follow.

7
It's almost childish in its simplicity and worldview, but that's actually what makes this first volume of Assassination Classroom so charming.
COMMENT AND DISCUSS
blog comments powered by Disqus